If someone tells me that I’ve hurt their feelings, I’d say, “I’m still waiting to hear what your point is.” I’m very depressed about how in this country you can be told, “That’s offensive!” as though those two words constitute an argument or a comment. Not to me they don’t. - CH

(NB: All quotes in this article have been transcribed verbatim from YouTube video sources. Hitchens spoke more than once on these various themes so the words you hear if you watch a clip may be different.)

Christopher Hitchens would have turned 70 this year had he not been taken by cancer 8 years ago. 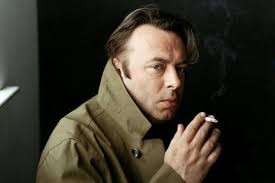 His incisive, sometimes stinging, verbal rejoinders were aptly dubbed ‘Hitchslaps’ by his admirers

Judging by the recentness of many comments made beneath videos of him on YouTube, he continues to reach out to a vast – and still apparently growing – audience. The veneration that transpires through some comments – those along the lines of “Christopher Hitchens made me see the light” – verges on the religious. Telling him so would, however, have been likely to invite the mother of all ‘Hitchslaps’. For Christopher Hitchens was a man on a crusade against religion – an antitheist.

Antitheism (literally ‘being opposed to belief in a god or gods’) is a militant expression of atheism: it goes on the offensive against religion. The term entered the lexicon largely through the activities of Richard Dawkins and Christopher Hitchens. Not that they were the first antitheists – Bertrand Russell (author of “Why I Am Not a Christian”) was one, and there have been others. But the combination of the modern mass media and a growing acceptance of – indeed, appetite for – provocative critiques of religion shot Dawkins and Hitchens to fame while the likes of Russell remain the preserve of the literati. 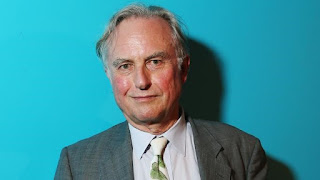 Richard Dawkins is best known for his assertive defence of the evolutionary paradigm and his popularisation of evolutionary biology through books such as “The Selfish Gene”, “The Blind Watchmaker” and “The Greatest Show on Earth”. He is also the author of the best-seller “The God Delusion”. In interviews and panel discussions, he comes across as an archetypal English gentleman – he puts his case with the forceful conviction of the expert but remains affable and restrained, although we occasionally see his feathers being ruffled by some inane religious fundamentalist or a particularly boorish interviewer.

Christopher Hitchens was cut from different cloth – he once playfully referred to Dawkins as a “spokesman of the moderate wing [of atheism]”. Here was a man who did not mince his words when he considered the occasion to merit a departure from the rules of etiquette, and that included getting very personal. When asked on a TV interview about the then recently deceased American evangelist Jerry Falwell, he described Falwell as a “vulgar fraud and crook” and went on to say,

We have been rid of an extremely dangerous demagogue who lived by hatred of others, and prejudice, and who committed treason by saying that the United States deserved the attack on it and its civil society in November 2001 by other religious nutcases like himself.

It was on occasions when he was directly confronted with his bête noir that he really let rip. In the course of one panel discussion, he summed up his view of the biblical story in which Abraham is about to make a blood sacrifice of his son:

If I was told to sacrifice [my children] to prove my devotion to God – if I was told to do what all monotheists are told to do and admire the man who said, “Yes, I’ll gut my kid to show my love of God” – I’d say, “No, fuck you!”

As this last exemplar of the Hitchslap in all its gory glory shows, Hitchens attacked religion right where it claims its main strength lies: as a basis for morality. That the Old Testament contains invocations to genocide, rape and slavery is well known to most Christians, who usually dismiss them as representing the ‘law’ that was made redundant by Jesus. But Hitchens vented his spleen just as savagely at the central Christian doctrine of atonement:

Is it moral to believe that your sins … can be forgiven by the punishment of another person? Is it ethical to believe that? Now I would submit that the doctrine of vicarious redemption by human sacrifice is utterly immoral… A positively immoral doctrine that abolishes the concept of personal responsibility on which all ethics and all morality must depend.

Hitchens effectively turned the tables on the religious in the matters of ethics and morality :

The idea that there is a supernatural dictatorship required for us to think about our duties and responsibilities to each other is the most sinister idea ever invented. These questions cannot be referred up to a celestial Dear Leader. We do not live, and do not wish to live – fortunately in any case, don’t have to live – in a divine North Korea.

I strongly suspect that this line of argument, and the passion with which it was put, did more to sway the doubters away from religion than any of Dawkins’ measured scientific rationality. After all, mainstream religion – modern Christianity in particular – rests its case on its ethical and moral credentials. Find a chink in that armour and the whole show comes tumbling down – and I am of the opinion that that is exactly what Christopher Hitchens did in the eyes of many who had hitherto been fence-sitters.

There is no way of knowing how many people Christopher Hitchens convinced of his stance, but one thing is clear enough: unlike so many with axes to grind in public, Hitchens was not merely preaching to the converted. Halls and auditoriums were filled wherever he went. Millions watched high-profile televised panel discussions/debates such as the one under the auspices of the ‘Intelligence2’ series. His book “God is Not Great” (subtitle: “How Religion Poisons Everything”) has been read by many more. It could, of course, be said that Hitchens was riding the crest of a wave not of his own making – that society at large had become so cynical about established religion over the preceding century that his message fell on receptive ears. And yet I am quite certain that he made a difference – a big difference, even – in his own right.

I am happy to be called a fan, but not a follower, of Christopher Hitchens. There was a palpable arrogance about the man. He had a domineering way about him and often talked down to people. On occasion he would make it abundantly clear through his manner and bearing that, as far as he was concerned, the other person simply did not exist. Sometimes, he dealt with questioners and challengers overly brusquely, especially when one could see that his temper was on a short fuse. Unlike the genial ‘let’s-all-please-be-reasonable-about-this’ front presented by Dawkins, Hitchens offended many people because he set out to offend them. He struck me as a man who was inclined towards a rather black-and-white view of the world and of other people – a measure of absolutism is discernible at times –  and was just a bit too quick to judge and to act, sometimes injudiciously, upon that judgement.

I doubt whether I would have hit it off with him as a person – on the contrary, I would have been on my guard, wary of the very real possibility of initiating a herculean personality clash. Between having a chinwag over a Scotch or three with Christopher Hitchens or Richard Dawkins, I would choose the latter any day. But I genuinely appreciate Hitchens’ candour – albeit preferably at a distance – and one can only respect his incisive wit and masterly turn of phrase. 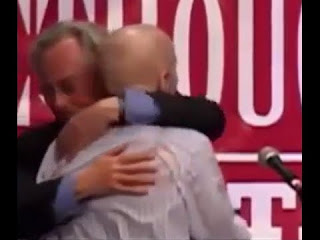 An emotional farewell between Richard Dawkins and Christopher Hitchens at Hitchens’ last public appearance shortly before he died. His last words to that audience were, “Take the risk of thinking for yourself. Much more happiness, truth, beauty and wisdom will come to you that way.”

One thing I am quite certain of: Christopher Hitchens will continue to be cited long after the likes of Jerry Falwell have been forgotten. Indeed I rather suspect that he will be remembered as a person for much longer than the gentlemanly Richard Dawkins. Love him or loathe him, he was not the kind of man whose memory is easily erased.

It is coming up to eight years since Christopher passed away, and goodness knows how much of what he said, what he prophesied and warned of, has come to pass. His outspoken condemnation of Islam and of our apathy towards those who seek to install it into our society. His stance on free speech, and what it means to be free to express yourself and your ideas, moreover, the loss of this, and how this is likely to take place. He was right of course.

A pity we will never hear Hitchens opinion of "the Maori world view."
It seems to be a backdoor version of religion which involves blessings, karakia (prayer). waiata (hymns) and so on. To object to being subjected to it is not PC and it is another facet of the Maori tail wagging the non-Maori dog.

We need more Chris Hitchens exposing the crass stupidity of each and every religion. Etiquette has no place where charlatans brain-wash gullible people to accept their word as a matter of faith completely negating any shred of reason.
I would include Socialism and Environmentalism into the list as both are based on false testimony.

I picked up a copy of God is not Great at the airport several years ago and read it with relish. I continue to refer to it now and again. The book confirms quite a number of thoughts and reasonings I myself have had from an early age. Along with this book is another just out by Richard Dawkins "Outgrowing God". To those teetering on the edge both books are required reading.