Yesterday Statistics NZ released results from the General Social Survey which asks respondents whether they have enough money to meet everyday needs.

Here is the result by family type for 'Not enough money':


"The proportion of single parents who felt they didn’t have enough money to meet everyday needs decreased from over one-third (36 percent) in 2008 to around one-quarter (24 percent) in 2018 – the biggest decrease of any family type."

There is a very strong correlation with the numbers on the DPB (which became Single Parent Support in 2013). 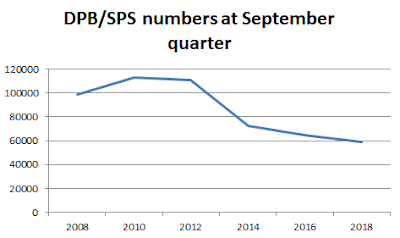 Obviously the strengthening economy after the GFC has provided more jobs. But also Bill English realised that is was just as important to focus on parents on benefits as it was the single unemployed. In fact probably more important as their well-being would effect the next generation.

I hope that we are not looking at a future where more single parents will be saying they don't have enough money to cover their costs because of the current government's attitude to welfare.