China has enough coal-fired power plants in the pipeline to match the entire capacity of the European Union, driving the expansion in global coal power and confounding the movement against the polluting fossil fuel, according to a new report. 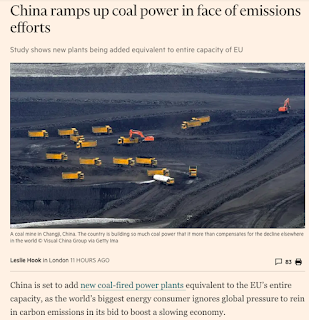 The nation has almost 148 gigawatts of coal-fired capacity under active construction or likely to be resumed after being suspended, Global Energy Monitor, a non-profit group that tracks coal stations, said in the report Thursday based on plant-by-plant data. That’s almost equivalent to 150 gigawatts of existing coal fleet capacity in the EU and more than the combined 105 gigawatts under construction in the rest of the world, it said.
In contrast to many other countries, including the U.K.’s pledge to shut all coal plants by 2025, Beijing remains committed to coal as its biggest source of power, representing a major challenge to global emissions reduction targets. Its additions in the 18 months to June dwarf declines elsewhere in the world, according to the report.
“As more countries turn away from coal and retire their plants, China’s continued pursuit of coal is increasingly out of step with the rest of the world, and is now effectively driving the ongoing expansion of the global coal fleet,” the report said.
China’s National Development & Reform Commission, its top economic planner, the National Energy Administration and the China Electricity Council didn’t respond to requests for comment.
Though China has spent more on clean energy than any other country and is pushing to burn natural gas instead of coal to counter smog, it’s still pumping money at home and abroad into coal-fired generation. Meanwhile, growing climate-change pressure has spurred a retreat from thermal coal by top miners such as Rio Tinto Group and BHP Group Plc and prompted lenders including Standard Chartered Plc and HSBC Holdings Plc to slash financing for new coal projects.
Worldwide coal-power capacity grew by almost 35 gigawatts from 2018 through June 2019 as an increase in China’s fleet offset a decline of 8.1 gigawatts in other countries.
The nation is on track to cap installed coal power capacity at 1,100 gigawatts by 2020. However, its coal and power industry groups are proposing further expansion to capacity of 1,200 to 1,400 gigawatts by 2035, according to the report. Should that be adopted, China alone would have more than triple the limit on worldwide coal power determined by the Paris climate agreement to keep global warming well below 2 degrees Celsius (3.6 degrees Fahrenheit), GEM said.


London, 12 December – While leaders of western countries fret about their greenhouse gas emissions in Katowice, China is forging ahead with new projects and investments in coal and gas. According to a new paper from the Global Warming Foundation (GWPF), the Communist Party’s survival depends on delivering economic growth and cleaner air.
As the report’s author Patricia Adams explains:
“The Chinese have spent a lot of money on renewables without results on anything like the scale required. So despite their continuing outward support for the green agenda, China is actually going all out for fossil fuels. The Communist Party’s grip on power depends on it.”
As a result, analysts expect China’s coal production to continue to grow, with increases of 10 percent likely in the next two years. Such changes dwarf any reductions that are likely in western countries.
As Adams puts it:
“Just a few years ago, China was lauded as a climate saviour. That’s all in the past now.”
In the foreword to the new paper, former US Ambassador and US special envoy to the UNFCCC Dr Harlan Watson said:
“Many in the environmental community look to China to assume the role of global climate leader. But Patricia Adams questions China’s interest in assuming this role as the need for continued economic growth means securing new energy supplies will take priority over climate change concerns.” 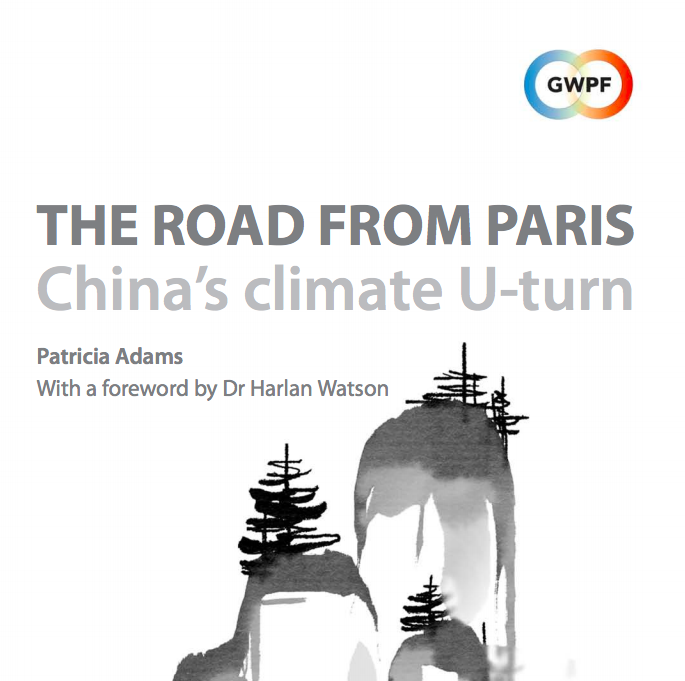 3) Remember This Nonsense? Lord Stern Hails China's Coal Peak As 'Turning Point In The History of The World'
Damian Carrington, The Guardian, 25 July 2016

The global battle against climate change has passed a historic turning point with China’s huge coal burning finally having peaked, according to senior economists.

They say the moment may well be a significant milestone in the course of the Anthropocene, the current era in which human activity dominates the world’s environment.
China is the world’s biggest polluter and more than tripled its coal burning from 2000 to 2013, emitting billions of tonnes of climate-warming carbon dioxide. But its coal consumption peaked in 2014, much earlier than expected, and then began falling.

The economists argue in a new paper on Monday that this can now be seen as permanent trend, not a blip, due to major shifts in the Chinese economy and a crackdown on pollution.

“I think it is a real turning point,” said Lord Nicholas Stern, an eminent climate economist at the London School of Economics, who wrote the analysis with colleagues from Tsinghua University in Beijing. “I think historians really will see [the coal peak of] 2014 as a very important event in the history of the climate and economy of the world.”

Over 250 news outlets and journalists partnered with Columbia University School of Journalism’s flagship magazine to shape control of “climate crisis” coverage in the lead up to the United Nations climate conference.

The coverage-coordination initiative included directing how much time, space and prominence should be devoted to the coverage, and asking that climate “news” be added to seemingly unrelated stories.

Some of the biggest media outlets in the country, such as CBS and Bloomberg, joined the effort. But others, such as The Washington Post and The New York  Times, declined to participate in a project they reportedly feared appeared activist in nature. More troubling, a number of the major outlets that joined did not disclose participation to their readers.

In addition to CBS and Bloomberg, the effort, called Covering Climate Now, involved BuzzFeed News, HuffPost, The Daily Beast, the Center for Public Integrity, Newsweek, Rolling Stone, Slate, Vanity Fair and The Weather Channel, among many others. BuzzFeed and The Huffington Post were among the major outlets that did not disclose the coordination. When asked by the Daily Caller News Foundation, the lack of disclosure was criticized by the Society of Professional Journalists.

The coordination effort was organized in part by Columbia Journalism Review (CJR), a nonprofit that represents professional journalists and was traditionally focused primarily on journalism ethics. Covering Climate Now’s founders hope to continue elevating climate news even after the project ends. The effort’s target was the lead-up to, and coverage of, the U.N. “Climate Action Summit,” held Sept. 15-23.

BuzzFeed News reached more than 27 million unique views between September and October, according to Quantcast, a website measuring audience size. BuzzFeed is owned by Jonah Peretti, an internet entrepreneur who founded the outlet in 2006 to track viral online content, and the left-leaning HuffPo is owned by Verizon Communications. Media tycoon Arianna Huffington originally founded HuffPo in 2005 with the help of Peretti.

Covering Climate Now’s founders kicked off the project in April and announced in May that they would ask partners to devote a week to climate-related news, starting in September. The Nation environmental correspondent Mark Hertsgaard co-founded the project under the assumption that the news outlets don’t cover climate change as urgently as he thinks they should.

WaPo and others did not contribute because they believe Covering Climate Now has the “aroma” of advocacy, he complained in September.

“We believe that every news organization in America, and many around the world, can play a part,” CJR posted May 22. Sometimes that will mean committing your newsroom to important and high-impact stories. Other times it will mean sharing your content, engaging your community, or adding a few lines of climate information to stories that wouldn’t otherwise have them.”

Much of the group’s coverage leading up to the U.S. climate summit focused on Swedish activist Greta Thunberg, a 16-year-old girl who traveled to the U.S. in August on a racing yacht. Her visit was designed to galvanize American support for policies that seek to tackle climate change.

Thunberg’s activism and Covering Climate Now’s media blitz seemed to fall flat with the crowd of United Nations diplomats: No major promises were made to tackle climate change at the summit. The European Union, for instance, didn’t go along with environmentalists’ wishes and set a goal to be carbon neutral by mid-century out of fear that such ambitions would tank its member state’s struggling economies.