Barend Vlaardingerbroek: What’s been up in Lebanon?

Last semester (September to December, ending just before Xmas after being extended) was not an easy one for yours truly.

The students stopped attending classes halfway through October to attend mass demonstrations. Many academic staff staged a brief strike in support. Foreign students packed their bags and went home, as did numerous Lebanese students with families outside Beirut. The rest of the semester was on-and-off as the place vacillated between being a functioning university and a drop-in-when-you-feel-like-it venue for students bothering to grace us with their presence. Academics were exhorted by the senior administration to be ‘flexible’ with regard to course delivery and assessment. 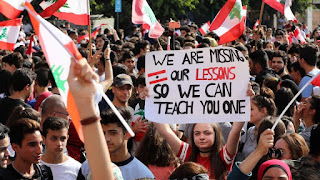 So what was all the fuss about? That there has long been dissatisfaction with the Lebanese political elite is old hat. They are regarded as largely ineffective – parliament is in a state of perpetual paralysis and the legislative chamber is empty much of the time – and corrupt.  Fortunately, the Lebanese system of governance is based on the Napoleonic model in which there is a strong separation of powers between the legislature and the executive branches (cf. the English model in which the two are closely linked); a well-organised bureaucracy actually runs the place whether there are bums on parliamentary seats or not. One of the jokes I have been known to crack with students is to suggest that we pay parliamentarians to not attend parliament as the country appears to run better when they don’t. I’ve never had anyone objecting to that sagely advice. 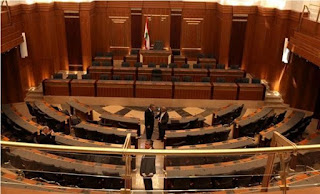 The Lebanese parliament on a typical working day
The PM resigned in late October but that wasn’t enough for the protestors. They clamoured for a complete overhaul of the Lebanese governmental system. In the meantime, they demanded that a group of technocrats be assembled to put the economy to rights, the country being on the verge of bankruptcy. The shenanigans on the streets prompted the banks to close their doors and provided the excuse they needed to cut back drastically on converting Lebanese Lira into US dollars in the face of the looming currency crisis: the Lira is pegged to the US dollar and is inconvertible outside, putting great strain on dwindling USD reserves. Businesses started buying dollars on the black market to pay for goods from abroad. Expatriates with regular overseas payments to meet such as mortgages hit the panic button.

Things started to get nasty with some opposing anti-government and pro-government mobs throwing stones at one another and engaging in fisticuffs sometimes supplemented with crude weapons such as hunks of wood and metal bars when the police couldn’t keep them apart. However, numbers began dropping off and by the time the BBC announced a general strike in late November the ‘revolution’ (as many demonstrators called it) had lost so much steam that this action did not materialise. When I asked a Lebanese co-worker about it, she fixed that ‘you dumbo’ look upon me and said, “It’s the end of the month – payday. People want to collect their salaries.” Well, you can’t do that if your employer has shut down because you’re on strike, can you now.

As Xmas approached, the protestors’ enthusiasm appeared to revitalise somewhat. But the patience of the police was running out and the riot squad was called out when demonstrators tried to reoccupy the square near parliament buildings in mid-December. Injuries began to mount, but compared with the parallel uprisings in Iraq, it was a teddy bears’ picnic. The cold and wet conditions that then kicked in dampened the protestors’ ardour more than did any teargas or baton charges. 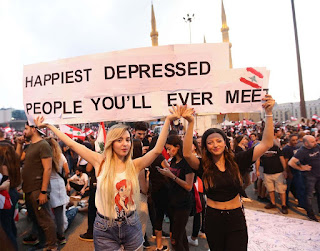 Street party with a difference
Trying to change the governmental structure of Lebanon presents a daunting challenge. A bit of background may be useful here.

Lebanese society is organised along sectarian community lines. There are 18 recognised sectarian groups. People vote for parliamentary representatives within those, using a formula for the distribution of seats based on the relative populations of the various sectarian communities (a bit iffy given that the last national census was in 1932, but let’s not be pedantic). Constitutional arrangements have it that the President of the Republic must be a Maronite Christian, the Prime Minister a Sunni Muslim, and the Speaker a Shia Muslim.

After the civil war from 1975 to 1989, an agreement called the Taif Accord was drawn up devolving a lot of power in civil matters to the sectarian communities. For instance, there are effectively 18 sets of laws pertaining to marriage and related matters such as inheritance and divorce. (This creates a problem for couples who do not belong to the same sectarian community as there is no such thing as civil marriage in Lebanon – such couples usually go to Cyprus to tie the knot.)

There has long been a movement advocating a secular governmental structure (referred to by the French term ‘laïque’). That would have been the way to go in 1990 but the Taif Accord, despite conciliatory noises to the contrary, took the country in the opposite direction. The sectarian system of governance is firmly entrenched. It also explains much of the active interest regional powers show in Lebanon’s internal affairs through sectarian political groupings. The country is part of the so-called ‘Shia Crescent’ (see my article ‘Yemen and Islam’s internecine war’, Breaking Views 1 April 2015) through the Iranian-backed Hezbollah, while the Saudis pull a lot of the strings at senior governmental level – recall the furore the year before last about the Lebanese PM being detained in Riyadh. 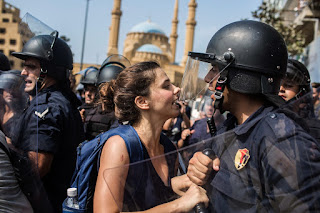 “Protesters defy police brutality” said one international news outlet.
I wouldn’t mind being ‘defied’ like that…

Geopolitical actors outside the region also exhibit more than a cursory interest in what happens in this most Westernised of Middle Eastern countries. Lebanon can draw on a lot of ‘sentimental capital’ in Europe, especially in France relations with which go back to the time of the Crusades and which was entrusted by the League of Nations to guide Lebanon towards independence under the mandate system following WW1. Lebanon continues to feature as a vital cog in US Middle Eastern policy.

The American influence is profound, especially among the higher social classes – North America is the main destination for the on-going Lebanese diaspora. One of the paradoxes that caught my attention when I first came here 15 years ago is that many francophone Lebanese send their kids to francophone schools where many sit the French as well as Lebanese Baccalauréat and then make a sideways shift to an elite American private university – the American University of Beirut or the Lebanese American University – despite there being a world-class francophone university on their doorstep (Université St-Joseph).

In my opinion, this ‘revolution’ isn’t going anywhere. Calls for a fundamental restructuring of the governmental system are pie-in-the sky stuff. Hezbollah formed a liaison with the principal Maronite Christian political grouping several years ago, producing a formidable power block which will take an awful lot of shifting. There are too many vested interests at stake, both external and internal – and it’s ultimately the former ones that call the shots. There are delicate equilibria the upsetting of which could be catastrophic for the country and have wide-ranging regional ripple effects. For the foreseeable future, poor little Lebanon will just have to stagger on as it has done since the day of its illusory independence in 1943. Being the meat in the sandwich isn’t the ideal situation to be in, but there are worse ways to go – as other countries in the region bear ample witness to.

Of more immediate concern is the crumbling economy. Imports of wheat flour, fuel and pharmaceuticals can still be paid for using the fixed exchange rate of just over 1500 Lira to the US dollar, but it’s anyone’s guess how long the current situation can continue – the black market exchange rate is now well over 2000. Incomes are modest – the minimum wage rate of 750,000 Lira/month doesn’t get people with dependents very far (and it’s not exactly rigorously enforced anyway – many people work for less). Once ordinary people start really feeling the pinch, it might transpire that there’s more than one kind of ‘revolution’ and the next one might not look so much like a street party.