Lindsay Mitchell: Nash goes on the offensive and gets it wrong

This morning, before Hosking had even asked an opening question Nash waded in:

NASH: "Hey Mike I haven't heard you comment on the December figures last year when 19,000  handed in their benefit and got back to work. Was that in one of your commentaries?"

HOSKING: "It was actually Stuart. You shouldn't come on this programme and say 'I haven't heard you' because all that indicates is you're tuned into the wrong radio station. You need to be where the number one radio show is and the audience is Stuart especially now that it's election year and you need some votes.

NASH: "Well when you think there are 19,000 more people in work than were on the benefit in the last quarter that's pretty good news . That shows a great economy and good economic management I would say. Wouldn't you Mike?"

HOSKING: "Well no because my great concern is the massive increase in the people on the benefit. How do you explain that?"

NASH: "It's still a lower percentage than it was when we took over [wrong - see below]."

NASH: "But the economy's growing, we've got record low unemployment. This is the third lowest unemployment in the last ten years.Wages are rising and the economy is booming."

18,818 benefit cancellations for work is not particularly spectacular when compared to the previous  December quarters and the trend-line is down. 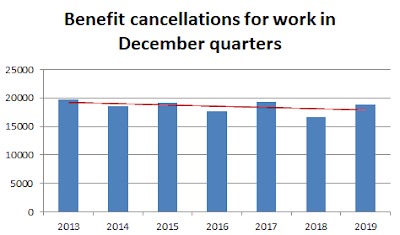 In respect of the Jobseeker benefit the number grew from 4.2% to 4.9% 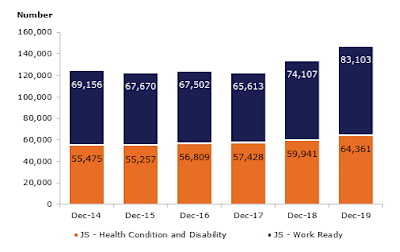 An election campaign that is facts-based? Honest, robust, transparent?