As the GWPF and other critics of the Government’s foolish wind obsession have warned, the risk of lights going out all over Britain is rising relentlessly.

Click on image to read
The Brink of Darkness: Britain’s Fragile Power Grid
For the second time in weeks National Grid has warned that Britain’s big onshore and offshore wind farms will be failing to deliver, generating only about 2.5GW today because of low wind speeds.

In the meantime, the costs of stabilising the national grid and avoiding catastrophic blackouts have been rising sharply, as unreliable renewables have taken a leading role in electricity supply. During the first lockdown, National Grid expected the total cost of these rescue measures to be about £2bn this year, but even that figure was based on the erroneous assumption that the country and stabilising costs would return to normal after the summer.

The time has come to pause the blind rush into a renewable energy disaster and reassess the evident technological, national security and economic costs and problems the renewable energy obsession faces.

National Grid last night sent out an urgent call for more power stations to fire up to keep Britain’s lights on today after plant outages and low wind farm output increased the risk of blackouts. 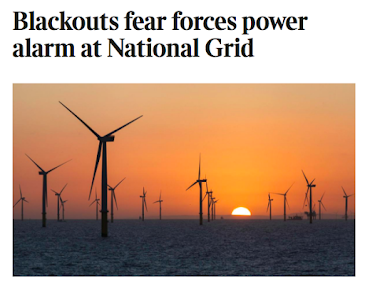 The electricity system operator issued an “margin notice”, its most serious security of supply alert in four years, warning of a supply crunch between 4:30pm and 6:30pm today.

It forecast a shortfall of 740 megawatts, or 1.5 per cent, compared with the power plant capacity it wants to have available to meet demand and to provide back-up in case plants break down.

Sources said the operator was in talks for coal-fired power stations to fire up to provide back-up. EDF confirmed it had been asked to warm up its West Burton A plant in Nottinghamshire.

National Grid said the margin notice “highlights that we would like a greater safety cushion between power demand and available supply” but “does not signal that blackouts are imminent”.

The alert and the prospect of Britain relying on polluting coal plants to keep the lights on will raise concerns about energy security. All coal plants are due to close by October 2024, while the government recently committed to a renewed push for offshore wind farms.

National Grid said that it was “forecasting tight margins on the electricity system . . . owing to a number of factors, including low renewable output and the availability of generators over periods of the day with higher demand”. It was “exploring measures to make sure there is enough generation available to increase our buffer of capacity”. 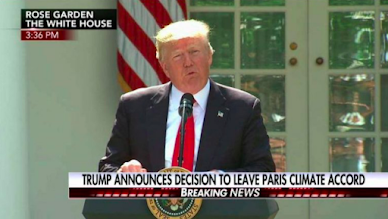 But the outcome of the tight U.S. election contest will determine for how long. Trump’s Democratic rival, Joe Biden, has promised to rejoin the agreement if elected.

“The U.S. withdrawal will leave a gap in our regime, and the global efforts to achieve the goals and ambitions of the Paris Agreement,” said Patricia Espinosa, executive secretary of the U.N. Framework Convention on Climate Change (UNFCCC).

The United States still remains a party to the UNFCCC. Espinosa said the body will be “ready to assist the U.S. in any effort in order to rejoin the Paris Agreement.”

Trump first announced his intention to withdraw the United States from the pact in June 2017, arguing it would undermine the U.S. economy. But he was unable to formally do so until now because of the requirements of the deal.

The departure makes the United States the only country of 197 signatories to have withdrawn from the agreement, hashed out in 2015. Obama’s White House had pledged to cut U.S. emissions 26-28% by 2025 from 2005 levels under the deal.

4) Blackout risk as low demand for power brings plea to switch off wind farms
The Times, 2 May 2020

Britain could be at risk of blackouts as extremely low energy demand threatens to leave the electricity grid overwhelmed by surplus power.

National Grid asked the regulator yesterday for emergency powers to switch off solar and wind farms to prevent the grid from being swamped on the May 8 bank holiday, when demand is expected to be especially low.

In its urgent request to Ofgem, it warned of “a significant risk of disruption to security of supply” if the “last resort” powers to order plant disconnections were not granted.

National Grid has to keep supply and demand balanced to ensure stable voltage and frequency on the network.

When there is an imbalance the network can become unstable, leading to blackouts such as that on August 9 last year when a million homes were cut off.

The lockdown has led to a huge fall in demand for power as factories and businesses shut down. National Grid said in its request to Ofgem: “The societal changes required by the need to achieve social distancing have led to demand for electricity falling by up to 20 per cent compared to predicted values.”

Full story (£)
5) Renewable energy is a blackout risk, warns National Grid after chaos during biggest outage in a decade
Mail on Sunday, 17 August 2019

National Grid had evidence that the shift to renewable energy was putting Britain's electricity supply at risk months before the biggest blackout in a decade, The Mail on Sunday can reveal. 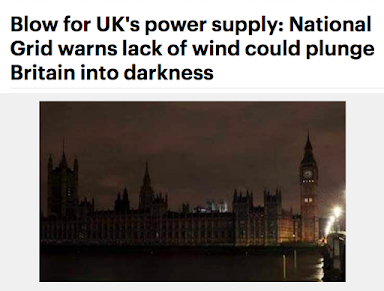 The company, which is responsible for keeping the lights on, has downplayed the role of wind energy in the power cut that caused widespread chaos earlier this month.
John Pettigrew, chief executive of the FTSE 100 firm, described the outage as a 'once-in-30-years' event and said there was 'nothing to indicate there is anything to do with the fact that we are moving to more wind or more solar'.

In a report based on a £6.8 million research project, National Grid admitted that renewables increased the 'unpredictability and volatility' of the power supply which 'could lead to faults on the electricity network'.

6) How clouds hold the key to global warming
Science Under Attack, 2 November 2020

One of the biggest weaknesses in computer climate models – the very models whose predictions underlie proposed political action on human CO2 emissions – is the representation of clouds and their response to global warming. 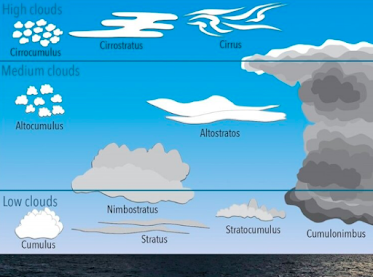 The deficiencies in computer simulations of clouds are acknowledged even by climate modelers. Yet cloud behavior is key to whether future warming is a serious problem or not.

Clouds can both cool and warm the planet. Low-level clouds such as cumulus and stratus clouds are thick enough to reflect 30-60% of the sun’s radiation that strikes them back into space, so they act like a parasol and cool the earth’s surface. High-level clouds such as cirrus clouds, on the other hand, are thinner and allow most of the sun’s radiation to penetrate, but also act as a blanket preventing the escape of reradiated heat to space and thus warm the earth. Warming can result from either a reduction in low clouds, or an increase in high clouds, or both.

Our inability to model clouds satisfactorily is partly because we just don’t know much about their inner workings either during a cloud’s formation, or when it rains, or when a cloud is absorbing or radiating heat.  So a lot of adjustable parameters are needed to describe them. It’s partly also because actual clouds are much smaller than the minimum grid scale in supercomputers, by as much as several hundred or even a thousand times.  For that reason, clouds are represented in computer models by average values of size, altitude, number and geographic location.

Most climate models predict that low cloud cover will decrease as the planet heats up, but this is by no means certain and meaningful observational evidence for clouds is sparse. To remedy the shortcoming, a researcher at Columbia University’s Earth Institute has embarked on a project to study how low clouds respond to climate change, especially in the tropics which receive the most sunlight and where low clouds are extensive.

The three-year project will utilize NASA satellite data to investigate the response of puffy cumulus clouds and more layered stratocumulus clouds to both surface temperature and the stability of the lower atmosphere. These are the two main influences on low cloud formation. It’s only recent satellite technology that makes it possible to clearly distinguish the two types of cloud from each other and from higher clouds. The knowledge obtained will test how well computer climate models simulate present-day low cloud behavior, as well as help narrow the range of warming expected as CO2 continues to rise.

High clouds are controversial. Climate models predict that high clouds will get higher and become more numerous as the atmosphere warms, resulting in a greater blanket effect and even more warming. This is an example of expected positive climate feedback – feedback that amplifies global warming. Positive feedback is also the mechanism by which low cloud cover is expected to diminish with warming.

But there’s empirical satellite evidence, obtained by scientists from the University of Alabama and the University of Auckland in New Zealand, that cloud feedback for both low-level and high-level clouds is negative. The satellite data also support an earlier proposal by atmospheric climatologist Richard Lindzen that high-level clouds near the equator open up, like the iris of an eye, to release extra heat when the temperature rises – also a negative feedback effect.

If indeed cloud feedback is negative rather than positive, it’s possible that combined negative feedbacks in the climate system dominate the positive feedbacks from water vapor, which is the primary greenhouse gas, and from snow and ice.