Barend Vlaardingerbroek: Is postal voting compatible with the democratic ideal of the secret ballot?

Election time in early to mid-Victorian England used to be a barrel of fun – quite literally, as candidates plied their potential constituents with liquor to gain their favour.

Deals were struck (usually accompanied by the tinkle of gold) with local personages who would see to it that the favour would be returned by all members of that constituency under their influence (bearing in mind that numbers of electors were much smaller in the days when only men who owned property could vote). 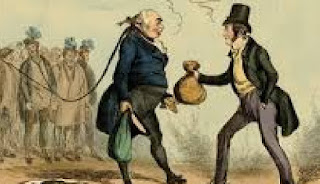 These various abuses were possible because everyone knew whom everyone was voting for. The farce came to an end with the Ballot Act 1872 which brought in the secret ballot for national and municipal elections. A man could now drink your booze and promise to vote for you in return but not keep his word, and there would be no way of knowing.

To cite a cliché, elections are supposed to be ‘free and fair’. Let us focus on the word ‘free’.

A ‘free’ election is one in which voters cast their vote according to their own, and no-one else’s, wishes. There should be no coercion, no matter how mild, at the point of marking the ballot paper. Advocates can put their case for their candidate or party to you beforehand as compellingly as they see fit, but at the crucial moment it is you and you alone who decides which box to tick on your ballot paper.

All this is, or should be, passé. The days of the election circus so poignantly described by Anthony Trollope in the Palliser novels are long gone. We berate nations that do not ensure voter freedom and may even regard their election results as illegitimate. The secret ballot is the guarantor of a free election.

There are instances where showing up at a polling booth is impracticable. The voter may, for instance, be on the move or be present in a different electorate or country. Hence the postal vote.

Is a postal vote necessarily a ‘free’ vote? It may well be the case that a postal vote is ‘secret’ in the sense that the voter filled in the form with nobody looking on. But in the real world, we know that it is often – probably usually – not so. Other members of the household are usually around – regular social contacts from outside that household may well be too – and may exert pressure on the voter to mark the ballot paper in a certain way. I am not necessarily talking about strong-arm tactics here. The supporters of candidate X who are members of a social circle who mostly support candidate Y (or the more domineering members of which do) are certain to feel pressured. They are breaking ranks. They dread the stern looks and sarcy comments that are sure to arise. They could sneak into a bedroom and fill in the form when nobody is looking but that will only invite suspicion. So they will grudgingly vote for the candidate who meets with common approval and make sure they do so in full view. Had they been alone in a polling booth, those pressures would have been kept at bay.

My concern is that a voting mechanism that was originally intended to cater for a small minority of people who could not make it to a polling station has become so widespread. The pandemic provided an excuse for a lot of electors this time around, but postal voting as a matter of convenience was already becoming a common event – an emerging new norm given a push-along by Covid-19.

As a relevant aside, the shenanigans following the US presidential election has put the spotlight on postal voting more than ever before, but not for the reasons the Trump campaign put forward. Trump was wrong in claiming that the election had been ‘stolen’ from him because of postal votes coming in after the close of polling being counted – the court ruling that such votes could be counted provided they were postmarked no later than the day of the election was a right decision (in English Common Law this principle goes back to the ‘postal rule’ of 1848 relating to the use of the mail in meeting contractual obligations). The counting of postal votes is not the top priority during the hours of and immediately after in-person vote-casting, so they can be set aside to be counted after those have been processed (and be added to by more of them arriving in the mail bag). This may create an impression that loads of postal votes have been illicitly ‘dumped’ onto the scene at a late stage, but this is an illusion brought about by the practicalities involved.

I put it to you that we should reverse the trend towards postal voting as it is a negation of the central importance of the secret ballot to the democratic process. It is rolling the clock back to the days of Anthony Trollope’s election charade (alas, minus the free booze). It should not be an insurmountable problem in the 21st century to make arrangements for people who are unable to present themselves in their local electorates on the day. Voters residing overseas, for instance, could cast their ballots at an embassy or consulate, either of their own country or of another that has close relations with their own.

Law-makers need to take a critical look at postal voting and ask themselves whether it is truly compatible with the notion of a ‘free’ ballot.

Another perhaps related point is the "modern" big push to encourage early voting. At one time these were all counted as Special Votes and quite properly restricted to those folk who had and could show good reason for their inability to vote on Voting Day.
Voting Regulations demand that all political advertising is removed from sight by the eve of Election Day. The reason implied is to prevent influence at the time of voting. Now, we are exhorted to "vote early to avoid waiting in line." Covid-19 was used to booster the push even harder this time round. Early voting should remain the exception. There was no realistic justification for the constant pressure to vote "by" the appointed date and no excuse for the daily updates on how many of us had complied and how many had "still to vote" with the spur-on that we risked missing out.
Murray Belchamber