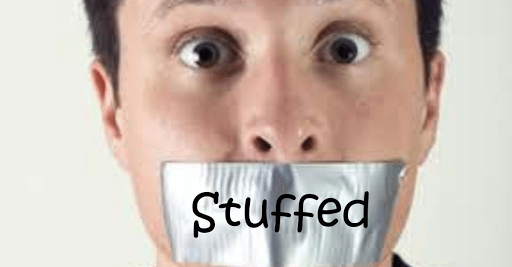 Two Stuff publications, the Whangarei Leader and the Bay Chronicle have refused to publish an advertisement from Democracy Northland.

This is despite the advert being cleared by the Advertising Standards Authority (ASA) as being factually correct, despite the editors of each of the two publications initially accepting the ad’, Stuff confirming the booking and accepting payment. The papers reversed their position just a day before the advertisements were to appear.

The only explanation received to date is from the sales rep who says:

“Their decision [a three-member editorial panel] is based primarily off the core values that we are paying extra attention to at this given time. Particularly with our current value realignment, they believe the ad may not align with the message that the company is trying to push forward at this stage. While I appreciate that there should be a certain element of freedom of voice within all publications, it appears that at this time our editorial team is being extra cautious with what is going into our papers due to the sensitive nature of our current value realignment.”

We have asked for a written decision from the editorial panel. That is awaited (as is the refund!).

We are obviously outraged at the decision to block the ad’, and more so because the advertisement was about democracy and did not go into the merits or otherwise of race-based seats. All we want is for everyone to have a say on the matter – it’s what we understand by the meaning of democracy. That clearly does not align with the realignment values of the Whangarei Leader and the Kerikeri Chronicle.

To view the ad’ click here: Its about democracy

Please share this ad’ with as many people as you can and let’s send a message to Stuff and our local body councillors. 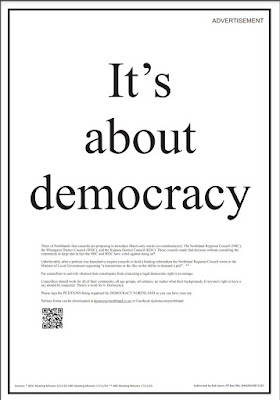 Stuff are an appalling media organisation. They put the W in woke. Always blowing their own virtuosity trumpet about anything from climate change to ethnic and sexual minority discrimination and a whole host of PC issues in between.
They must have wet themselves when Jacinda declared a @#*CLIMATE EMERGENCY*#@.

I used to subscribe to the Christchurch Press, until I received a letter from them thanking me for my subscription, and inviting me to send my opinions on anything, providing it wasn’t anything about climate denial, as they didn’t believe in that, so wouldn't publish anything negative on climate change. I didn't have an opinion one way or another on climate change, but I am a great believer in freedom of the Press, and I wrote to them accordingly, and cancelled my subscription. What is happening to our country and to democracy? Have the ordinary moderate people kept quiet for too long while all the extremists rant and rave about their views on everything? Is it too late now to start voicing our opinions?

I’m frightened for our beautiful country. What’s happening to it? Everyone has lost their sense of humour, we are all pussyfooting around and are scared to voice an opinion in case we are shot down by the far left extremists who seem to have taken over. Remember the days when all the Irish jokes were around? Most of my ancestors were from Ireland and England (with a little bit of Maori), but we all joined in the laughter at the ridiculing of the Irish - I didn’t take offence, and no one I know did either. I am sad that we can’t express an opinion any more without being labelled racist, or redneck, or some other derogatory name (I am none of those things, just want us all to to be equal, and New Zealanders). I welcome all the different ethnicities that we have here now, and just hope that they appreciate all that New Zealand is and don’t try to change it. We are all the one race - the human race.

Well said Pam
I agree with you totally. The ones that are racist immoral and UNDEMCRATIC are the publishers of these publications.
John

My father was the editor of a respected provincial paper in the days when such papers had a significant standing. I am extremely offended by stuff's comments on this issue generally and in particular in the local write up. I am in the process of writing to the Editorial Director of Stuff to seek a public apology.

The primary enemy of the people in current times are corrupt (and incompetent) Journalists and the owners and Editors of main stream media outlets. You cannot fool all of the people all of the time. Just Boycott them and the advertisers will pull their revenue (this is already happening )and they will go belly up eventually. Far too many journalists have made the mistake of becoming political advocates while posing as unbiased journalists. They are so obvious. They have no ethics.