An article published by the Weather Channel tries to link climate change to a variety of environmental “disasters,” that struck around the world in 2020. The article cites limited evidence for any link. In reality, none of the asserted disasters are tied to supposed human-caused climate change.

In the Weather Channel article titled, “2020’s Worst Environmental Disasters, and How Climate Change Played a Role,” the author writes, “In a year of unprecedented disasters, much of the damage done to our planet in 2020 was self-inflicted.” Historical records and data show none of the disasters discussed in the article are, in fact, unprecedented.

Among the environmental tribulations the Weather Channel discusses are oil spills, dams breaking, and wildfires.

Regarding oil spills, humans have indeed caused some oil spills, but these have occurred either through human error or poor equipment maintenance. Climate change plays no role in oil spills, regardless of the Weather Channel’s unsubstantiated speculation.

Regarding dam failures, floods from unexpectedly heavy rainfall can undoubtedly combine with poor maintenance or poor government decision-making to result in dams failing, but there is no scientific link to climate change. As pointed out in Climate At A Glance: Floods, the U.N. Intergovernmental Panel on Climate Change (IPCC) acknowledges having “low confidence” in any climate change impact regarding the frequency or severity of floods. This includes “low confidence” in even the “sign” of any changes—meaning, it is just as likely that climate change is making floods less frequent and less severe.

In addition, a study on the climate impact on flooding for the USA and Europe, published in the Journal of Hydrology, Volume 552, September 2017, Pages 704-717, found: “The number of significant trends was about the number expected due to chance alone. Changes in the frequency of major floods are dominated by multidecadal variability.”

Regarding wildfires, the IPCC has found across the mid-latitudes (including the U.S.) there has been a modest but measurable increase in moisture, which mitigates wildfires.

The Weather Channel points to Australia’s tragic 2019-2020 wildfire season as proof of warming-induced wildfire expansion. The Weather Channel failed to note that before the 2019-2020 wildfire season, the continent had for nearly a decade experienced above-average rainfall. At the same time, Australia’s government had decided not to manage its brush and trees, the fuel load for wildfires. These two factors combined to create tinder box conditions which exploded when Australia’s normal drought cycle reoccurred.

In California, the situation is much the same, with the article admitting, “Particularly in California … decisions on forest management and fire suppression, and expansion of homes and businesses into less-developed areas have combined to make the 2020 fire season one of the most destructive in recorded history.” The Weather Channel blamed a “human caused global warming,” as well, but the best available data indicate no such link exists. The article says, “[v]egetation left dry by climate change is fueling unprecedentedly large wildfires,” yet vegetation is not being left dry by climate change.

Indeed, As reported in Climate at a Glance: Drought, the IPCC reports with “high confidence” that precipitation has increased over mid-latitude land areas of the Northern Hemisphere (including the United States) during the past 70 years.

Moreover, the U.S. National Oceanic and Atmospheric Administration (NOAA) reports America is currently is undergoing its longest period in recorded history with less than 40 percent of the country experiencing “very dry” conditions. Also, the United States in 2017 – and then again in 2019 – registered its smallest percentage of land area experiencing drought.

As reported in Climate at a Glance: Wildfires, long-term data from the U.S. National Interagency Fire Center (NIFC) show wildfires have dramatically declined in number and severity in recent decades. Reporting data on U.S. wildfires from as far back as 1926, NIFC documents that the number of acres annually burned recently is only1/4th to 1/5th of the annual acres burned in the 1930s. 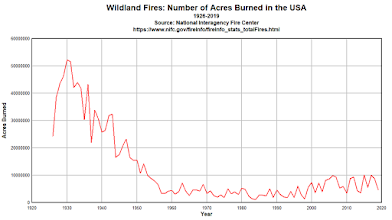 The wildfires burning in the U.S. West in the past few years are more appropriately labeled, “Greenie Fires, Not Climate Fires,” as James Taylor wrote in a recent Climate Realism article discussing the issue.

As Taylor notes, “The reason why wildfires in the U.S. West, and especially in Pacific Coast states, are becoming more severe in recent years is because federal, state, and local governments have followed environmental extremists’ demands that we no longer actively manage our forests. Proactive forest management requires thinning of forests, prescriptive burns, thinning of underbrush, and removal of dead trees that serve as super-fuel for forest fires. Environmental extremists have largely blocked these activities during the past 30 in the U.S. West, leading to explosive wildfire conditions that defy global trends.”

2020 was undoubtedly a bad year for environmental disasters, but contrary to the Weather Channel’s assertions, assertions made without citing supporting evidence, there is limited if any proof that climate change contributed to the problems.

Dr Sterling Burnett is managing editor of Environment & Climate News and a research fellow for environment and energy policy at The Heartland Institute.

If we are looking at environmental disasters, we must also include volcanoes. The effect of emitted gases must have considerable influence on greenhouse gas accumulation. If this is true and warming is proved to have some effect on fires and floods, then one may assume that man has very little input to so called "global warming" greenhouse gas totals.