Guy Benson: We Must Punish 'Problematic' Thought Crimes With 'Hostility'

Behold, the perfectly creepy and Orwellian capstone to a week of campus insanity and inanity, courtesy of the dim bulbs who populate the editorial board of Wellesley College's student newspaper.

I've employed that ad hominem descriptor for two reasons: First, their argument is a logical train wreck, but that's par for the course with anti-speech tyrants. Second, a compounding sin: It's horribly written. Their prose is truly and embarrassingly atrocious. It's as if a group of mostly-literate sixth-graders joined forces to whip up a self-important harangue, straining and failing to evince erudition.

The resulting product is a jumble of incoherence that should theoretically humiliate the "elite" all-female institution that (a) admitted these students, and (b) cultivated this sort of thinking - and I use that term loosely. A taste:


Wellesley is certainly not a place for racism, sexism, homophobia, Islamophobia, transphobia or any other type of discriminatory speech. Shutting down rhetoric that undermines the existence and rights of others is not a violation of free speech; it is hate speech. The founding fathers put free speech in the Constitution as a way to protect the disenfranchised and to protect individual citizens from the power of the government. The spirit of free speech is to protect the suppressed, not to protect a free-for-all where anything is acceptable, no matter how hateful and damaging… We have all said problematic claims, the origins of which were ingrained in us by our discriminatory and biased society. Luckily, most of us have been taught by our peers and mentors at Wellesley in a productive way.

It is vital that we encourage people to correct and learn from their mistakes rather than berate them for a lack of education they could not control. While it is expected that these lessons will be difficult and often personal, holding difficult conversations for the sake of educating is very different from shaming on the basis of ignorance. This being said, if people are given the resources to learn and either continue to speak hate speech or refuse to adapt their beliefs, then hostility may be warranted. If people continue to support racist politicians or pay for speakers that prop up speech that will lead to the harm of others, then it is critical to take the appropriate measures to hold them accountable for their actions. It is important to note that our preference for education over beration regards students who may have not been given the chance to learn.

The first bolded sentence is really quite special because it makes the case that shutting down 'offensive' rhetoric amounts to hate speech.  That's not what the authors intended, I'd wager, but it's what they wrote. Slow clap. (Very slow, just so the editors of The Wellesley News can keep up).  The next highlighted sentence fragment is pure garbage writing, replete with a non-ironic use of "problematic."  And bonus points for proceeding to lay previous wrong-thinking utterances at the feet of our horrible, nasty society.  Socialize everything.  The last bit is nothing short of poorly-crafted, yet admirably candid, advocacy on behalf of anti-speech fascism: If re-education efforts don't stick, and offenders rudely decline to renounce their unenlightened views, hostile consequences must ensue.  The founding fathers' (side note: um, patriarchy much? #problematic) limited vision of free speech was to "protect the suppressed," you see, which is why a new, 'correct' form of suppression is imperative.  Or something.  Anyway, I've embedded the full piece below because as I write this, the publication's website has crashed under the weight of online gawkers. This editorial is so gobsmackingly dumb that the Internet just had to see it for itself; sadly, The Wellesley News' server wasn't up to the task.  Twitter to the rescue: 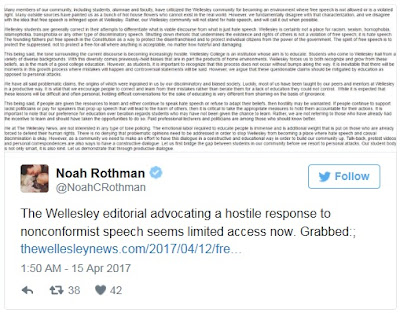 Consult your physician if your headache lasts more than three hours.  And before anyone even thinks about suggesting that perhaps the time has come for Wellesley's student newspaper to get some men to oversee the editorial process, please be forewarned that "hostility may be warranted" in response to such a deliberate and unforgivably provocative affront -- especially if it's a joke.  Those definitely aren't allowed either.

Unbelievable! and these are the very people we trust to educate our kids. no wonder we're in the state we're in.

Wellesley College [Mass ] is stunning. Most speech and expression is free, unless it is not free. We can tell you which is which. It is a pity we can not control peoples' thoughts but we look forward to the day when zombies like us can do just that. .