Barend Vlaardingerbroek: Genderless pronouns just might make sense after all

The following informal guidelines on how to treat people who are transitioning or genderqueer may be helpful for colleagues and fellow students. Listen to the person, and ask them how they want to be treated and referred to. Think of the person as being the gender that they want you to think of them as. Use the name and pronoun that the person asks you to. If you are not sure what the right pronoun is, then simply ask

An idea gaining traction is to have an assortment of pronouns that people can choose from depending on their ‘gender identity’. With 50+ ‘gender identities’ being bandied about, that could become complicated. 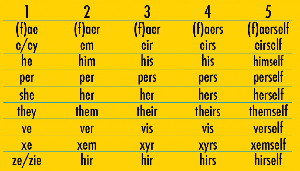 This could be just the beginning! 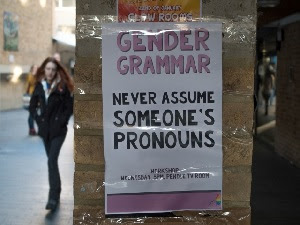 Let’s get back down to Earth for a moment. The suggestion that we refer to individuals using their ‘preferred pronouns’ is wholly impracticable. What are we supposed to do when first meeting someone – ask what gender that person ‘identifies with’ and which of a selection of pronouns that person wants us to use? Am I supposed to introduce myself as “Barend Vlaardingerbroek, I identify with the male gender and want you to refer to me as ‘he’”? Will printers of business cards start inserting spaces for ‘gender identity’ and ‘preferred pronoun’? Blimey, isn’t this getting just a wee bit bizarre?

Whose business is your ‘gender identity’ anyway? Answer: yours. And of course you can make that known to your friends and acquaintances should you so wish. But why should I, whose relationship with you is purely functional (at work, for instance), be interested? More to the point, why should you insist on making your gender identity my business? I object to having your personal business foisted on me!

Let me make one thing clear right now: I am emphatically NOT going to even think about any mishmash of pronouns invented for a plethora of so-called ‘gender identities’. It represents an imposition that I just won’t wear.

One guy who has already found himself in hot water over pronoun use is Canadian Professor Jordan Peterson who got himself into the news last year by publicly refusing to refer to LGBTQI  students by their ‘preferred pronouns’ (for story and poignant commentary, see http://www.theglobeandmail.com/opinion/the-professor-vs-the-pronoun-warriors/article32474079/). He was dobbed in for ‘offending’ those students by not bowing to their demand to apply new ‘genderless’ pronouns to them, insisting on the continuing use of ‘he’ or ‘she’.

But even with only the two classical ‘gendered’ pronouns, we run into problems with people who are clearly male but look or are trying to look female, and vice-versa. A commonsense approach would be to use the pronoun that is consistent with the appearance. 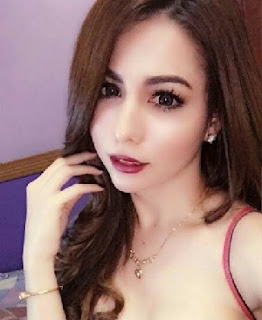 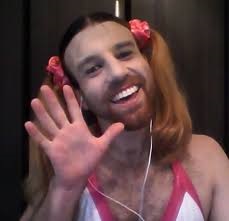 So now I’m in trouble with the ‘human rights’ Inquisition for ‘offending’ him for not referring to him as ‘she’. Oh well, it was a good idea while it lasted…

Life is too short for this kind of tedious hassle – some of us, at least, have more important things to get on with – so allow me to make a suggestion: if ‘gendered’ pronouns are causing strife, let’s replace them with non-‘gendered’ pronouns. (At this stage, I must, with all due respect, part company with Professor Peterson.)

English is a funny old language as we already have both ‘gendered’ (‘he/she’) and ‘genderless’ pronouns – ‘I’, ‘you’ and ‘they’ (to which could be added ‘one’, as in “One must watch one’s pronouns!”). Now if we’re going to be pedantic, it should be noted that ‘he’ can actually double as a ‘genderless’ pronoun; until not so long ago, there was a general understanding that statements such as “A member must renew his membership every year, failing which he will be removed from the register” applied to both males and females. (Those were the days when the word ‘Man’, especially if spelt with a capital ‘M’, was universally used to denote all humanity.)  But the feminist lobby got all upset about what had been standard English usage for centuries, and people at large started modifying their language use.

One strategy is to use ‘he or she’ but that becomes cumbersome (“A member must renew his or her membership every year, failing which he or she will be removed from the register”.) It also raises the contentious problem of which should come first. Tradition would have us use the male pronoun first, but… (sigh).

The problem can often be circumvented by turning the pertinent noun into a plural so that the genderless ‘they’ can be substituted – “Members must renew their membership every year, failing which they will be removed from the register”. This requires making a conscious effort to pluralise the relevant noun before opening one’s mouth – easy enough for us articulate types, not so for many others.

An easier way out is to use ‘they’ regardless of whether the noun is singular or plural – “A member must renew their membership every year, failing which they will be removed from the register”. This is now common practice in Western anglophone jurisdictions and is exemplified by the Oxford Uni usage at the start of this article. The trouble for a linguistic purist like yours truly is that this is bad grammar: if the noun is singular, one should not link it to a plural pronoun! Shock horror!

In these times when a growing number of people appear to revel in gender ambiguity, perhaps ‘genderless pronouns’ are a good idea. Exit ‘he’ and ‘she’, enter ‘ze’ (as one suggestion) whether the subject is male, female, both or neither. “A member must renew zir membership every year, failing which ze will be removed from the register.” Problem solved.

Some people might accuse me of capitulating, but I am in fact being my usual practical self. I am also respecting others’ privacy. I switched to ‘Ms’ early on because I regarded it as simpler than having to make a call between ‘Miss’ and ‘Mrs’ that I might get wrong, less devious than stealing furtive glances at a woman’s ring-finger, and less intrusive than having to ask her whether she wants me to use ‘Miss’ or ‘Mrs’ (which amounts to asking her whether she’s married or not, which really isn’t my business).

There is a caveat attached to my acceptance of genderless pronouns, though: if we are to bring in ‘ze’, that becomes a universal third-person pronoun – no nonsense about individuals choosing a ‘preferred pronoun’.  I am ‘ze’ when being referred to, and so are you, whoever and whatever you are. Do we have a deal?

Good, I’m so glad we got that sorted out. And now for goodness’ sake let us all get on with life and minding our own private business. (Dream on, BV…)


Barend Vlaardingerbroek BA, BSc, BEdSt, PGDipLaws, MAppSc, PhD is associate professor of education at the American University of Beirut and is a regular commentator on social and political issues. Feedback welcome at bv00@aub.edu.lb

I have decided that I will not visit Canada again. I am too old to be trying to work out whatever gender people have decided they identify with and would not feel comfortable asking people what gender they consider themselves to be. I have been speaking English for 79 years and the pronouns I use are I, you, he, she, it, we, they.

What a load of blather about what is, after all, A VERY SERIOUS TOPIC.

Here, for what it is worth, is my solution.

To cover the apparently increasing varieties of sexuality why not simply introduce a Ministry for Enforcement of Discrimination Between Sexes - M.E.D.B.S. They would be empowered to introduce a "Sexuality Scale". For instance the M<F scale with grades running from 0<99. Hence M1F is very nearly a complete male and M99F is very nearly a complete female and M50F defining a "perfect" transsexual.

But, alas, the feministas will not accept that - after all why should M come before F? It doesn't in the alphabet so why here? They will demand an F<M scale thereby confusing the G.B.A.R.W. (Govt Body for Allocation of Radio Waves). But not for long! Sooner rather than later they'd realise that a near 100% woman only gets a value of 1, whereas a near perfect male scores 99 - which simply would not do.

Once that's sorted out and implemented (another millennia perhaps) there will probably be an even bigger variety and the scale will have to be increased. Perhaps an alpha system M (or F) A<Z F (or M). Alternatively the numeric range could be extended using either a decimal point (0.001<9.999) or upping the anti (or uncle, as the case may be) to 0<99; 999 or even 9999 - by then who knows?

Underlying all this semantic garbage is the altered reality that every abnormal weirdo has to be provided with a separate recognition and individual position.
Except when you don't have any idea what weirdo it is then it becomes some previous plural "they."
Well, I am a dual personality and I want to be distiguished from the casual throwaway "they". I'm special, you see, I live in a world of unreality and I need my own identity tag.