Douglas Carswell: Nigel Farage is the one figure in British politics who has learnt from his mistakes 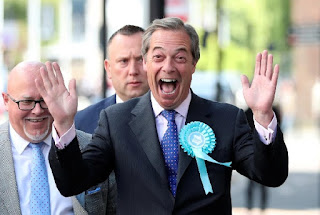 Success in politics, as with so many things, is often about learning from past mistakes. What is surprising, perhaps, is how few in politics – full as they are of their own sense of certainty – are able to do this.

Following last week’s catastrophic election results for the Labour Party, which saw millions of their traditional supporters abandon them for the Brexit Party, Labour moved further towards supporting a second referendum. As the party inched towards formally repudiating the views of 17.4 million people, it seems its leaders are quite incapable of learning from what happened in 2015.

Ed Miliband’s inability to understand, let alone articulate, the anti-EU sentiment of millions of voters during the general election campaign in 2015 helps explain why he fell far short of a majority. Rather than recognise any of that, Labour looks set to repeat Miliband’s mistake on an even grander scale.

The Conservatives seem even less capable of learning from what went wrong when it comes to Europe. For forty years, the party has tripped up repeatedly as it has attempted to be both a party of the nation, and one whose leadership defaults towards closer European integration.

In the early 1990s, this meant joining the European Exchange Rate mechanism – with disastrous economic and political consequences. In 2009, it meant David Cameron putting aside his ‘cast iron’ guarantee to oppose the Lisbon treaty. His party’s poll ratings fell as a direct consequence, and in the ensuing election against Gordon Brown, he failed to secure a majority and was forced into coalition with Nick Clegg.

Finally, in the aftermath of the 2016 referendum, it seemed as if the Conservative Party might at last come to its senses and embrace leaving the EU. Instead, they have made a mess of it, with various would-be Tory leaders quick to tell us that leaving the EU without the EU’s permission would be a disaster.

There is, however, one figure in UK politics that does seem to have learnt from past errors – Nigel Farage.

The Brexit Party might in some ways be a reincarnation of UKIP, but so far it seems to have managed to avoid many of its predecessors’ mistakes.

For a start, the party has mastered the art (or should one say, science) of online campaigning. They are no longer in the business of merely holding meetings for a few of the faithful in the backrooms of pubs. They know how to reach millions, with messages that resonate.

The new party has broadened its appeal, with the sort of beyond-the-base strategy that was so badly lacking in 2015.

The Brexit Party is not – thus far – all about Nigel, either. In the recent Euro elections, it fielded an impressive range of candidates – entrepreneurs, charity sector professionals, business owners. They looked a party of all Britain and all Britons.

So far, the party seems to have a message discipline that was not always there with UKIP. There have been precious few off-piste comments about HIV or immigration, for instance. Unlike in the run up to the 2015 election, the party has stuck to a simple message; the SW1 elite have failed to honour the referendum result.

And it’s a message that has cut through precisely because it rings true. The past thirty-three months have seen a consistent attempt – by MPs and the House of Lords, by civil servants and broadcasters, even by judges and archbishops – to undermine the referendum result.

At every opportunity, almost all of those that hold positions of authority within our country since June 2016 have acted to try to reverse the verdict of the people. Most of our Europhile Establishment don’t even regard what they have been up to since the referendum as an error. They still assume that they are somehow ameliorating the effects of a terrible misstep made by their inferiors.

The fact that all those urbane, educated people at the apex of our country, full of a sense of their own entitlement, have been slower to learn than Nigel Farage tells you something about the state of our elite.

Like the Bourbons or the Stuarts or the Romanovs, the chances that they might learn from what they have got wrong before it is too late look remote.

Douglas Carswell, a former MP, was a member of the Vote Leave campaign in the 2016 EU referendum. This article first appeared on CapX HERE.