Bill Shorten’s Labor Party will finish behind Scott Morrison’s Coalition and the Prime Minister still has a path to a majority government.

In counting to date, the Coalition holds 74 seats to Labor’s 67 seats, while the crossbench looks set to contain six members. It is ahead in three seats which are too close to call. If these leads hold, it could win a bare majority in the 151-seat House of Representatives.

Labor failed to make the gains it expected due largely to a poor primary vote of just 33.92 per cent, which was 1.59 per cent below its primary vote at the last election.


2) Australian Prime Minister Morrison Claims Victory In Historic Upset
CNN, 18 May 2019
Australia Prime Minister Scott Morrison has claimed victory in the 2019 election, with results showing the Liberal National coalition is on track to be returned to government.
"I have always believed in miracles," he told jubilant supporters in Sydney. "And tonight we've been delivered another one."
It was a stunning turnaround after every opinion poll over the campaign pointed to a Labor victory. Analysts are now saying Labor lost an "unlosable" election. 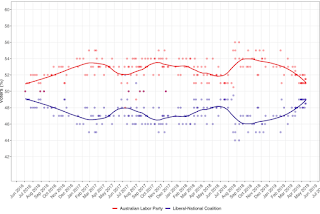 Labor was ahead in the polls for years when its leader caved to radical climate activists and made a 'climate emergency' top priority of the 'unlosable' election; source Wikipedia
3) Australians Vote In First 'Climate Election'
AFP, 18 May 2019

Australians flocked to the polls Saturday capping a bitterly fought election that may be the first anywhere decided by climate policy.

Between 16 and 17 million people are expected to vote across the vast island-continent, with the centre-left Labor party tipped for victory after six years in opposition.

Casting his ballot in Melbourne, would-be prime minister Bill Shorten was bullish about forming a majority government after a final poll showed his lead increasing.

"Today is the people's day," he said. "Be it buying a 'democracy sausage', the kids having a bit of a sugar cake or what have you, and voting."

"In the event that the people of Australia voted to stop the chaos and voted for action on climate change, we will be ready to hit the ground from tomorrow."

Mr Howard also said that there was “no doubt” that Labor’s prevarication over the Adani coal mine in Queensland had a major effect in the sunshine state.

“It’s a message to the nation, that — yes — sensible action on climate change is desirable. But radical action which destroys jobs, ruins industries and denies the people in less fortunate countries access to energy is something that the Australian people will reject.”