Freedom of religious belief is a fundamental human right. It stems from the freedom to hold and express one’s own opinions. This principle is one that all of us – religious and non-religious alike – should be able to agree upon.

It is worrisome, therefore, to come across reports of the persecution of people for reasons of religious identity. Whether Christian, Muslim, Hindu, Buddhist, Pagan or whatever, nobody should be persecuted because of religious belief. The Bishop of Truro’s Independent Review for the Foreign Secretary of FCO Support for Persecuted Christians (full report due later this year – see “Christian persecution 'at near genocide levels'”, BBC News, 3 May 2019), which warns that  Christianity may be “wiped out” in parts of the world, including the Middle East, should accordingly set the alarm bells ringing. 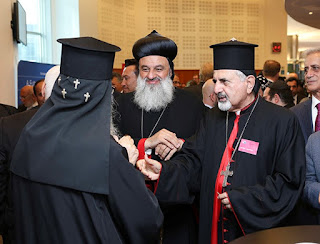 Christianity is a product of the Middle East. Various churches indigenous to the region, including the so-called ‘ancient churches’, have their own patriarchies.

The obvious connection that many will make is with militant Islam. The BBC reported that ‘hate crimes’ against Muslims in the UK doubled in the weeks following the Sri Lanka outrages. That’s going to help nobody, least of all persecuted Christian populations. The problems faced by Christians do not stem from any single source. Let’s look at this matter in full context.

The Middle East is naturally a principal focus of commentators because of its historical association with Christianity. Christianity is indeed indigenous to the Middle East. Jesus was a Palestinian Jew. Where I am sitting typing at this moment is very close to the route followed by St Paul on the road to Damascus. There were established Christian communities all over the place at the time of the Prophet Mohammed. There still are. There are seats set aside for Christians in some regional parliaments.

While it is certainly not the case that Middle Eastern Muslims and Middle Eastern Christians get on wonderfully well, it has to be borne in mind that Middle Eastern Muslims don’t get on wonderfully well with other Middle Eastern Muslims either. The Sunni/Shia schism occurred just 80 years after Mohammed’s death and led to internecine strife that continues to this day. The war in Yemen is a proxy war between Sunni Saudi Arabia and Shia Iran (see my article “Yemen and Islam’s internecine war”, Breaking Views 1 April 2015 HERE). On top of that, there are ideological fracture lines within the major sectarian blocs. I would go so far as to say that many Muslims are more disdainful of some fellow Muslims than they are of Christians. In religion as in politics, affinity all too often breeds contempt.

As a pertinent aside, Christianity in the Middle East is hardly a unitary entity either. There are the ‘ancient churches’ that trace their origins to the dawn of Christianity. Most of these are small but the Coptic Church can boast a following of around 20 million. Then there are ‘imported’ branches of Christianity, principally the Orthodox and Roman Catholic variants. Doctrinal differences and allegiances with bodies outside the region (such as the Vatican) can be sources of friction – Christianity in the Middle East is hardly one big happy family.

Outside the Middle East into southern Asia, we see a very different picture. While Islam is strictly speaking not indigenous to that region, it has been there for so long and wields such political and judicial power that is has become part of the fabric of those societies at every level. Christianity was brought in during the colonial era when Christianisation was a deliberate strategy on the part of the imperial power to ‘civilise’ subjugated peoples. It continues to be regarded by many in that part of the world as a foreign imposition tainted by its association with colonialism. In Pakistan, a woman (Asia Bibi) was on death row for 8 years for allegedly insulting the Prophet until released by the Supreme Court last year. Christians have to watch their step in Afghanistan as well. In both countries, the civil authorities take a dim view of apostasy. India also has seen sporadic outbreaks of violence against Christians, mostly by local Hindus targeting the activities of foreign missions. But the Report quite correctly attributes much discrimination against Christians in south Asia to rising nationalism rather than to competing religious beliefs as such. 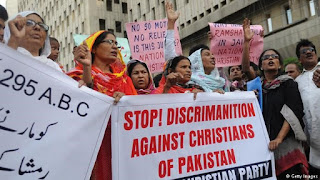 As long as religion plays a role in politics, there will be religious discrimination. Only the secular State can protect the rights of all its subjects, whatever they do – or don’t – believe.

Then there is the systematic persecution of Muslims and Christians – more so the former – in China. The Chinese State is explicitly atheistic and brooks no ideological competition. Hence the clampdown on not only ‘imported’ religions but even home-grown ones such as Falun Gong (see my article “Reining in the blustering Beijing bully”, Breaking Views 1 March 2019 HERE).

Returning to the Middle East, there were 1½ million Christians in Iraq a decade ago, now down to less than 10% of that figure. This was the doing of so-called Islamic State (ISIS). ISIS is fervently anti-Christian and drove Christians out of territories that they controlled. A considerable number were killed. But this too needs contextualising: ISIS hates everyone, including fellow Muslims not of their specific persuasion. And I surely need not have to remind readers of the treatment of other groups, particularly the Yazidi, under ISIS rule. But ISIS is an aberration which the overwhelming majority of Muslims categorically disavow. It no more represents Islam than the Lord’s Resistance Army represents Christianity.

Ironically, Syria is one of the most accommodating places in the region to be a Christian. Numerous Christian communities have coexisted alongside Muslims for many centuries. Muslim militias joined Syrian army units in taking the offensive against ISIS units bearing down on Christian populations in order to avert the slaughter that was imminent. Hence the high level of support for the Assad regime among Syrian Christian communities. This inconvenient fact continues to be ignored by the anti-Assad Western powers, particularly the US (see my article “Operation Regime Change – some aren’t giving up”,  Breaking Views 7 July 2016 HERE).

I am rather more optimistic about the future of Christianity in the Middle East than some commentators seem to be. It has been part of the landscape for almost 2000 years. As long as Middle Eastern society remains fragmented by sectarianism, there will be distrust between sectarian communities. But, to labour the point, this applies as much to different Muslim sects as it does to Muslims and Christians. I am more concerned about Christian communities outside the Middle Eastern region, particularly in Pakistan and Afghanistan, where there appears to be a hardening of attitudes to their detriment.

The Report alludes to the double standard that Political Correctness appears to impose in relation to religious discrimination and persecution. Here, I do agree with them entirely. Heaven help you if you speak out against aspects of Islam (enigmatically, that makes you a ‘racist’, although Islam is not a race) but it’s quite OK (mandatory, even) to foul-mouth Christianity. Likewise, it’s fashionable to make a fuss about the maltreatment of non-Christian groups such as the Yazidi, the Uyghurs or the Rohingya, but atrocities against Christians are largely swept under the carpet.

The Catholic/Protestant Punch-and-Judy show was a blight on European civilisation for centuries. I remember being warned about associating with Catholic kids in late 1950s Holland. Now, with fewer than a quarter of the population identifying as Christian (see my article “Religiosity and national happiness ratings”, Breaking Views 27 March 2015 HERE), it’s a non-issue.

Roll on secularisation. No, that doesn’t mean that we all become good little atheists. It means that we regard religious belief as a private matter and take it completely off the political radar screen.

Nice review and well balanced. But it does seem Christians get a poor press these days even though their policies generally aim for all that is good, peaceful and altruistic.

Great article and true But Islam is a religion born out of and spread by warfare by Mohamad and his extended family.

Take a look at Israel Falau & the persecution he is getting from everyone for saying that gays are going to end up in hell instead of heaven. While I don't agree with his belief nobody can 100% say that he is not right, so how can they take his career off him for saying what he believes in, I think he might win his court case.

I don't think we're using the word 'persecution' in quite the same way. Being penalised for bringing one's company or sport or whatever into disrepute is not 'persecution'.