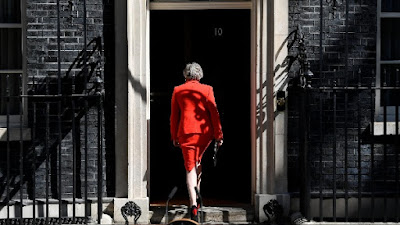 Assuming our new prime minister takes office at the end of a six-week campaign that kicks off on June 10, they will enter Downing Street during the week beginning July 22, most likely the Wednesday of that week. At that point there will be exactly 1016 days left until the next scheduled general election on May 5, 2022.

In other words, if Boris Johnson, Michael Gove, Jeremy Hunt, Dominic Raab, Esther McVey or someone else want to beat the records of Gordon Brown, Theresa May or Neville Chamberlain in terms of tenure at Number 10, they need to get re-elected at a general election. And that means finding a way through Brexit that entirely evaded their predecessor.

Of course, May’s successor may decide, at an earlier point, to risk everything with another electoral throw of the dice and hope that their campaigning and communication skills will see off the threat of Jeremy Corbyn’s Labour Party. But the most recent precedent for such a tactic will surely serve as a disincentive. Who wants to be remembered as the shortest serving prime minster in history?

In ruling out an early election, we should also, finally, rule out a second referendum. Tory MPs were enraged because May was about to publish a Bill that included something approaching that commitment. The notion that her successor could resurrect such a proposal is absurd.

So there will really only be one item on the new prime minister’s in-tray come July. And as exhausted MPs head off for their summer break, a new team at Number 10 and at the Department for Exiting the European Union will be war-gaming new scenarios and solutions.

And that’s when the new prime minister’s reputation will be made or broken.

The EU was already running out of patience with Britain before Theresa May announced her departure. Sunday’s results in the European Parliament elections are likely to send a large, unhelpful grouping of Brexit Party MEPs to Brussels (and Strasbourg), and however long their presence, they are unlikely to make things any easier for the various established political alliances, especially with an expected rise in nationalist and anti-EU representation from the rest of the continent.

President Macron is already voicing doubts about the wisdom of granting the UK a further extension of Article 50 beyond the current Halloween deadline and there is a sense that even those who seriously regret Britain’s departure are coming round to the view that it will be better for everyone once we get it over with.

All of this could work in the new prime minister’s favour, assuming they want to wield the threat of a no-deal Brexit as part of their attempts to win a better deal than the one May negotiated.

The one thing we now know is that the Tory grassroots will not vote for any candidate who opposes a no-deal Brexit. They already feel bitter and betrayed by Theresa May’s claim in 2017 that “no deal is better than a bad deal” and the subsequent revelation that that sound bite was just that and no more.

It is true that parliament has, in recent weeks, decided by the narrowest possible majority to oppose no-deal in principle. But such a move will prove meaningless if, in the days running up to October 31, an extension is either not requested or refused, and the Commons still hasn’t approved an alternative departure agreement.

That is when we may see – at last – some movement from those Labour MPs who claimed to oppose no deal but who refused to back Theresa May’s deal in the hope that Brexit could yet be cancelled altogether.

If by then the prime minister has negotiated either a fresh deal, or one that is radically altered from the current offer, will previously recalcitrant MPs really want to be blamed for Britain leaving the EU without a deal?

The key to that question is whether they believe the new prime minister means what they say about actually leaving. Whatever the merits of Theresa May’s rhetoric, few believed, in the end, that she would have tolerated a no-deal withdrawal under any circumstances. Perhaps her replacement won’t either, but that matters less than whether he or she is believed by the country to be prepared to go through with it.

We’re back in the biggest game of chicken our country has ever seen – two games, in fact: one with the European Commission and the other between the government and the Commons. Without a fresh election and with the parliamentary arithmetic unchanged since the last humiliating days of the May government, there is no alternative way out of this situation.

But there are perhaps grounds for optimism among those who still support Brexit. Theresa May was probably the worst negotiator that could have been sent into those talks with the EU27.

Her departure can only inject some fresh urgency into the process. We already knew what May’s view on a no-deal Brexit was; we’re about to find out just how seriously the EU want to avoid one. If they refuse to budge on what they’ve already negotiated with May, then we will know, at last, that they’re prepared to accept it. Will the UK?

Over to you, prime minister-to-be.

Tom Harris is a former Labour MP and the author of 'Ten Years in the Death of the Labour Party', who writes for CapX. This article first appeared HERE.