It’s All Over For Angela Merkel’s Climate Agenda

As Europe faces economic catastrophe due to the shutdown of most of its businesses and industries, EU officials have decided to protect cheap oil and gas from green campaigners who are trying to shut down all industries that continue to use fossil fuels (Net Zero).

Investors, politicians and campaigners have hit out at EU regulators’ “ludicrous” exclusion of oil and gas from a definition of fossil fuels, arguing it will lead asset managers to understate their environmental risks.

Under draft proposals for the EU’s sustainable disclosure regime, the European authorities responsible for banking, insurance and securities markets define fossil fuels as only applying to “solid” energy sources such as coal and lignite. […]

The latest EU proposals represent a significant watering down of its ambitious sustainable disclosure rules, which aim to give end investors clear information on the environmental, social and governance risks of their funds. 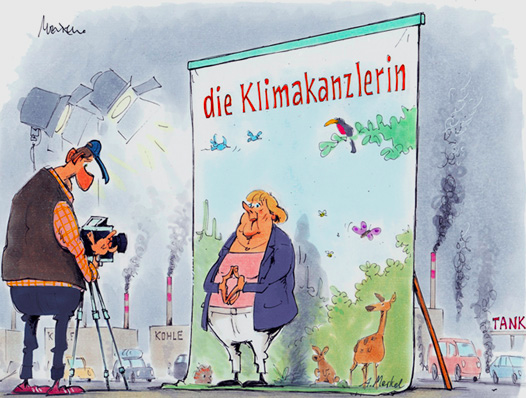 Angela Merkel once again gave the ‘Climate Chancellor’ for a day. At the Petersberg Climate Dialogue she asked, via video, to keep a close eye on climate targets. But of course everyone knows that the topic has slipped far behind on the Chancellor’s list of priorities. First, the coronavirus pandemic needs to be contained. Then the economy is facing the greatest recession – probably ever. And finally, there are the small matters such as school openings and the revitalisation of social and cultural life. Even the biggest loners are currently realising that they aren’t hermits.

Virologists have long since outclassed climate scientists. You can hardly hear anything from Greta. Her claim that the youth was stolen from her can easily be transferred to the pandemic. This is the fate millions of children face. This time, however, it is not about a single Swedish teenager who is on a sabbatical, but about millions of children who do not want to lose out in lockdown and homeschooling.

It is hard to imagine that in this unprecedented economic crisis companies will be burdened further. Those who continue to demand pricing of CO2 emissions will intensify the recession and torpedo the planned stimulus package. The shutdown gives us an impression of what deindustrialization means. The aim now is to prevent mass unemployment and not to make the social explosion even bigger.

Cynics and some climate researchers can certainly benefit from the pandemic. The short-term climate goals are achieved. But at what price! The Chancellor, of course, knows all of this. She also no longer has to hit the targets. But at some point she will have to explain that the climate plans drawn up during full employment are no longer viable.

Extinction Rebellion wants activists to stage rent strikes, halt tax payments and take out bank loans they never intend to repay in protest at an economic system they claim is fuelling a climate catastrophe.

With Extinction Rebellion, the climate change activist group, currently unable to take to the streets to demonstrate in a traditional fashion under the coronavirus lockdown and social distancing measures, they are planning acts of financial sabotage to ‘directly challenge the fundamental principles that govern our national and global economies’.

Internal documents obtained by The Mail on Sunday set out plans for a ‘Money Rebellion’ involving acts of financial sabotage to ‘directly challenge the fundamental principles that govern our national and global economies’.

Despite dire warnings that the coronavirus pandemic has plunged Britain into its worst recession for 300 years, the dossier details how the group – also known as XR – wants to launch a rent strike later this month.

It seeks to legitimise the protest by arguing that ‘our economic system is causing cancer in our planet’. It adds: ‘We will resist irresponsible lenders. Some of us will legally dispute debts, others will refuse to pay debts.’

Barclays Bank is named as a top target, with supporters encouraged to ‘take out a personal loan or a credit card’ and ‘publicly declare that they will not repay the debt’. HSBC, NatWest and Lloyds are also listed.

Activists are warned that in addition to being sued in the civil courts, they could face prosecution under the Fraud Act, but XR says the risk is outweighed by the damage caused to banks’ balance sheets and share prices. Organisers hope the protests will mobilise broader popular support, saying: ‘Any negative publicity could have the same desired effect as any financial consequence of the rebellion.’

The detailed documents suggest that while the pandemic has forced XR to ditch its campaign of street protests, the movement wants to exploit the crisis.

‘Without pressure from activists, we won’t see the increasingly necessary shift to a green economy,’ the dossier says. ‘Just as we have lost our usual means of rebelling, a new opportunity has opened up for us in a time when it is vital that we act.’

It then outlines a desire to launch ‘direct actions against the organisations acting in support of the cancer-causing system (banks, accounting firms, investment bodies, regulatory bodies, legal firms and so on)’.

XR hopes at least 5,000 supporters will refuse to pay their rent, adding: ‘Council tenants and private tenants alike can participate in the strike… on such a scale that it forces a society-wide conversation about our misguided economy.’

According to the documents, it will be followed by a tax strike involving 10,000 people who will sign a conditional commitment to withhold £100 of income tax.

4) Blackout Risk As Renewables Threaten To Destabilise National Grid
The Times, 2 May 2020

Britain could be at risk of blackouts as extremely low energy demand threatens to leave the electricity grid overwhelmed by surplus power. 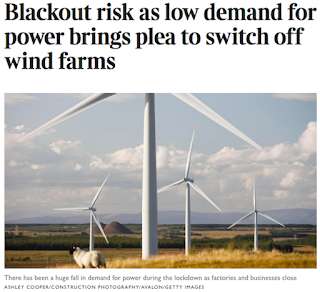 National Grid asked the regulator yesterday for emergency powers to switch off solar and wind farms to prevent the grid from being swamped on the May 8 bank holiday, when demand is expected to be especially low.

In its urgent request to Ofgem, it warned of “a significant risk of disruption to security of supply” if the “last resort” powers to order plant disconnections were not granted.

National Grid has to keep supply and demand balanced to ensure stable voltage and frequency on the network. When there is an imbalance the network can become unstable, leading to blackouts such as that on August 9 last year when a million homes were cut off.

* John Constable: The Role of Distributed Generation in the UK Blackout of 9 August 2019


5) Red Team To Challenge UK Science Advisers To Make Case For Quicker End To Lockdown
The Daily Telegraph, 3 May 2020

A rival Sage committee will on Monday back the public use of facemasks in a live-streamed meeting designed to embarrass The Government for its alleged lack of transparency.

Chaired by Professor Sir David King, the chief scientific advisor from 2000 to 2007, the group will stage a press conference to be broadcast on Youtube just before the daily Downing Street briefing, in which it will present the evidence for a quicker end to the lockdown. 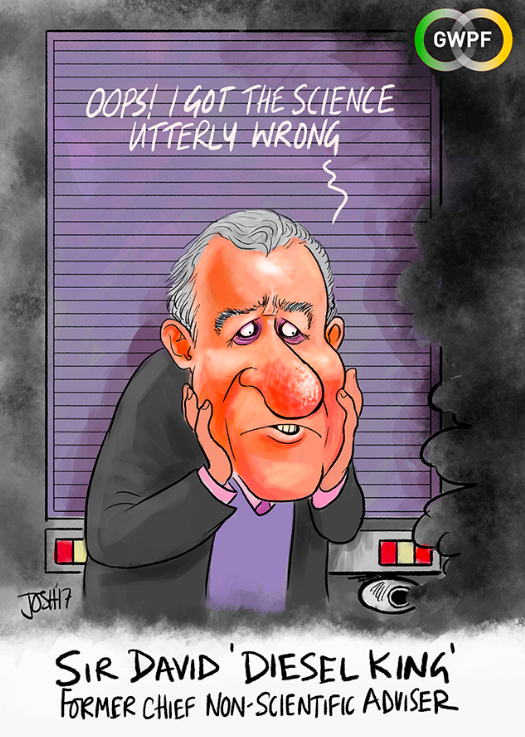 The committee has been established following criticism that the membership of the Government’s Scientific Advisory Group for Emergencies, and the advice it gives to ministers, is broadly secret.

The rival group will include experts from countries that are beginning to lift restrictions while keeping the virus at bay, as well as a former World Health Organisation director and a sitting advisor.

The ongoing coronavirus pandemic has sparked a vigorous debate about the role of science in public life. Both governments and their detractors have claimed they are 'following the science', a refrain that is very familiar to those of us who have followed the climate change debate. But to what extent can science really tell us what to do? Should expert opinion ever override the democratic process? Or are fear and uncertainty preventing us from making rational decisions? 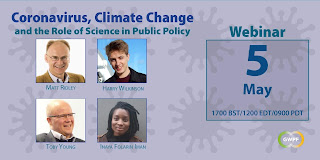 The world’s largest coal-producing country, Russia, plans to increase its output and exports over the next 15 years. Russia’s share of the global coal export market is projected to expand to 25 percent from the current 11 percent.

Domestic coal consumption will increase by over 12 percent; it currently stands at around 196 million tons annually. The Asia-Pacific states, Southeast Asia, the Middle East and Africa will continue to be the major markets for Russian coal. 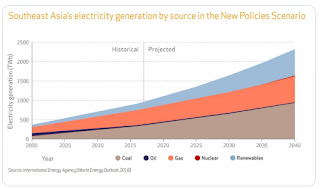 Russia is already exporting substantial amounts of coal to China (some 30 million tons per year) yet there remains great potential for a boost in exports in the coming years. The energy ministry expects exports to China to almost double within the next 10 years to 55 million tons, from their current level.

Another Asian market, India, also plans “significantly increasing” coking coal imports from Russia’s Far Eastern ports. Vietnam has already tripled its purchases of Russian coal on the back of the commissioning of several new coal-fired power plants. Meanwhile, the US Energy Information Administration (EIA) expects Russia to overtake Indonesia as the leading thermal coal exporter within this decade.

Coal mining has been a key industry in Russia for a long time, with the costs of production among the world’s lowest.

Greek-based international contracting group and renewable energy developer Ellaktor is quitting the Australian solar market after posting huge losses from its construction portfolio that is spread across half a dozen projects in Queensland, NSW and Victoria.

Ellkator in Australia is better known through its Biosar subsidiary, which only entered the Australian solar market a few years ago, but revealed overnight that its losses for the 2019 calendar year now totalled €113.3 million ($A187 million), mostly from its Australian portfolio. Astonishingly, this reflects early one third of the value of the contracts.

“Aktor (has) completed the construction of these projects and is exiting these markets,” the company says in a presentation of its annual results. Its construction division will now focus on markets in Greece and Romania, and its renewables division will focus on wind farms.

The departure of Ellaktor and its Biosar business from the Australian utility solar market continues the rapid exodus from a solar sector hit by cost-overruns and lengthy connection delays, which has in turn resulted in contractors being hit by “liquidated damages” from project owners seeking compensation for lost revenue.

In April, 2020, the Northern Hemisphere experienced its 2nd largest 2-month drop in temperature in the 497-month satellite record. 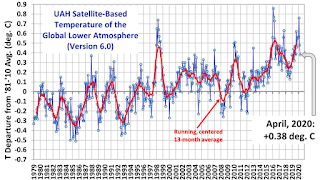