4)  1€ Trillion For Nothing? Germany On Course To Widely Miss EU Emission Targets
Clean Energy Wire, 15 May 2020

The lack of any sunspots suggests the current solar minimum is one of the ‘deepest’ in 100 years. 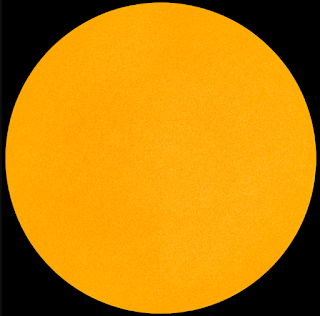 Daily Sun, 15 May 2020: The sun is blank--no sunspots. Credit: SDO/HMI
The sun has been reported to have a ‘very deep’ solar minimum with 100 days of 2020 not seeing any sunspots on its surface.

Astronomer Dr Tony Phillips says the current lack of sunspot counts suggests the current solar minimum is one of the ‘deepest’ of the past century.

A sunspot is an area of magnetic activity on the surface of the sun – also known as storms – and appear in areas of darkness. They play a huge part in the sun’s activity, including birthing solar flares and coronal mass ejections.

A solar minimum occurs when zero sunspots are spotted, but, before you start panicking and thinking this is a bad thing, solar minimums are all part of the sun’s cycle and occur every 11 years or so.

NASA first recorded no activity on the sun last summer and it is thought to have continued to be without sunspots ever since. Solar minimums usually consist of 12 months of little sunspot activity.

While the sunspots and the solar flares they give off become more ‘calm’ (as NASA describe it), it doesn’t affect the sun’s brightness.

The idea of solar minimums affecting life on Earth is an on-going debate with some scientists believing it can affect the weather and earthquakes, while others argue it has little impact on our planet.

Some scientists have linked previous solar minimums to dramatic drops in Earth’s temperature, including causing what was known as the ‘little ice age’ in the 1600s – some even fear it may happen again.

Valentina Zharkova, a professor of mathematics at Northumbria University said in a statement, ‘solar activity will fall by 60 percent during the 2030s to conditions last seen during the ‘mini ice age’ that began in 1645.’

Meanwhile, Georg Feulner, the deputy chair of the Earth system analysis research domain at the Potsdam Institute on Climate Change Research said, ‘The expected decrease in global temperature would be 0.1 degrees Celsius at most, compared to about 1.3 degrees Celsius since pre-industrial times by the year 2030.’ 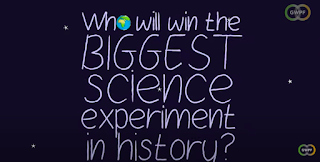 see also David Whitehouse: The Next Solar Cycle, And Why It Matters For Climate 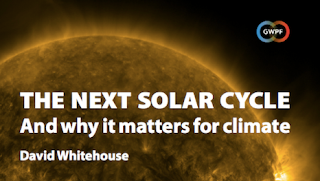 A new paper finds higher than expected CO2 fertilization inferred from leaf to global observations. The paper predicts that the Earth is going to gain nearly three times as much green matter as was predicted by the IPCC AR5. 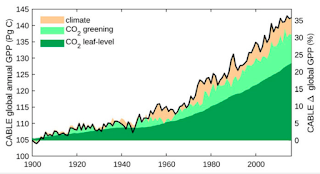 Earlier this month, I posted a short piece about an explosive paper on planetary greening that appeared in the journal Global Change Biology. I’ve since mused that it deserves a considerably longer, more contextual post.

The innocuously titled paper, “Higher than expected CO2 fertilization inferred from leaf to global observations”, by Vanessa Haverd (of Australia’s CSIRO) and eight coauthors uses a biophysical model and observed climate to back-calculate global primary productivity (GPP; the net change in standing vegetation per year), and to forward-calculate it using climate model forecasts.

Abstract.  “Several lines of evidence point to an increase in the activity of the terrestrial biosphere over recent decades, impacting the global net land carbon sink (NLS) and its control on the growth of atmospheric carbon dioxide (ca). Global terrestrial gross primary production (GPP)—the rate of carbon fixation by photosynthesis—is estimated to have risen by (31 ± 5)% since 1900, but the relative contributions of different putative drivers to this increase are not well known. Here we identify the rising atmospheric CO2 concentration as the dominant driver. We reconcile leaf‐level and global atmospheric constraints on trends in modeled biospheric activity to reveal a global CO2 fertilization effect on photosynthesis of 30% since 1900, or 47% for a doubling of ca above the pre‐industrial level. Our historic value is nearly twice as high as current estimates (17 ± 4)% that do not use the full range of available constraints. Consequently, under a future low‐emission scenario, we project a land carbon sink (174 PgC, 2006–2099) that is 57 PgC larger than if a lower CO2 fertilization effect comparable with current estimates is assumed. These findings suggest a larger beneficial role of the land carbon sink in modulating future excess anthropogenic CO2 consistent with the target of the Paris Agreement to stay below 2°C warming, and underscore the importance of preserving terrestrial carbon sinks.”

The paper predicted that the earth is going to gain nearly three times as much green matter as was forecast in the last (2013) IPCC report. It is noteworthy that Haverd’s model very faithfully reproduced the satellite-sensed changes in leaf area index shown by Zhu et al. (2016), which found the greatest greenings to be in the world’s semiarid tropics, tropical forests, and a smaller (but significant) increase in temperate latitudes. (I noted that paper here in 2018).

It’s very reassuring when two radically different methods—satellite sensing (Zhu) and a biophysical model (Haverd) come up with pretty much the same answer: we are greening up the earth fast, especially in critical tropical ecosystems.
Under a plausible emissions pathway, this will pull so much carbon dioxide out of the air that we could meet the Paris Accord of keeping surface warming below 2⁰C. Specifically, the authors wrote,

A German diplomat in Brussels has suggested that EU member states may not be able to reach agreement on an increased greenhouse gas emissions reduction target under the country’s presidency of the EU Council, due to begin in July, because of the impact of the coronavirus crisis.

4)  1€ Trillion For Nothing? Germany On Course To Widely Miss EU Emission Targets
Clean Energy Wire, 15 May 2020

Germany is on track to widely miss its EU obligations to reduce CO2 emissions. 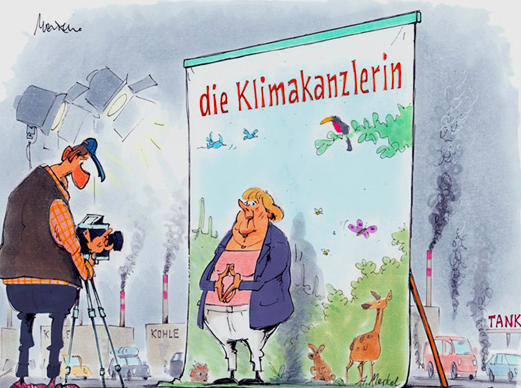 Germany is on track to widely miss its EU obligations to reduce CO2 emissions, even if the EU does not follow through plans to step up its ambitions in the fight against climate change, according to calculations by think tank Institute for Applied Ecology (Öko-Institut).

In sectors that are not covered by the Emissions Trading System (ETS) such as buildings, transport and agriculture, Germany is on course to lower emissions by 28 percent by 2030 compared to 2005 with existing legislation, falling short of its effort-sharing target of minus 38 percent. Germany’s effort-sharing emissions were above target for the fourth year in a row in 2019 despite a significant emissions drop. To reach the EU’s 2030 effort-sharing regulation targets, “considerable emissions reductions are needed in transport and buildings in particular,” the institute said.

(Bloomberg) — Some drillers in the biggest North American oil field are reopening wells shut in response to the pandemic-driven price collapse, according to pipeline giant Energy Transfer LP.

In the Permian Basin’s Midland region, about 8% of oil volumes that feed Energy Transfer’s pipe network had been shut at the start of the month, Mackie McCrea, the company’s chief commercial officer, said during a conference call on Monday.

But Energy Transfer said the industry probably has made it through the worst of the price crash triggered by Covid-19 lockdowns that zapped demand. “We see that things have bottomed out in our opinion and that things are improving,” McCrea said.

Oil producers have generally been vague about when they’ll ramp output back up, though some have hinted that oil prices in the high-$20s or low-$30s could be sufficient. While several drillers have said they’ve “voluntarily” curtailed production, others have had their hand forced by rapidly filling storage capacity. 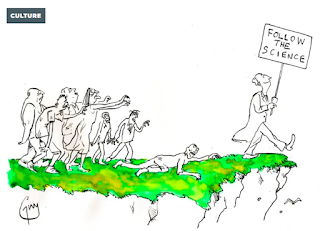 Definition:
The reproductive value (R value) tracks how many people, on average, will be infected for every one person who has a disease. When the R value is above 1, the disease spreads exponentially.

Derivation:
The infection rate of Covid-19 has national focus. Government measures are designed to push the R value down. If the R rate is low, we can relax. If it is high, we need to take action to protect people from infection.

Arguably more deadly than Covid-19 is the wave of intellectual viruses that have attacked brains, rather than lungs – here the R rate has been dangerously high for a number of years.

The ‘Offence virus’ and the ‘Climate Panic’ pandemic originated in American universities and spread rapidly. Whereas Covid-19 harms the physically frail, ‘Offence’ and its various strains, has mainly affected the brains of healthy, ‘privileged’ people who work in the cultural, media and intellectual sectors. It causes a degeneration in cognitive ability, whereby the sufferer loses the ability to debate honestly. Sufferers have been known to take offence at every opportunity, often on behalf of minority groups.

The worst affected experience the feeling of being physically harmed when they encounter views that differ from their own. These ‘diseases of the intellect’ have affected the behaviour of once rational human beings. No amount of monitoring of the R rate by those on the other side of the debate seems to reduce the spread.
The ‘Offence’ virus was a mutation of the once healthy concept of ‘equal rights’. Originating in the tortured imagination of social science academics, who were desperate to discover their own relevance, the pathogen was born. Academics, ‘activists’, journalists, writers and assorted ‘cultural creators’  were the first to fall vicim. Social media was the great super-spreader and their algorithms caused exponential infection rates.

Thus the bizarre and paranoid thought of a few academics on an American university campus can infect the entire cultural output of the BBC in months.

The best form of protection is to be alert and wash our hands of the worst ideas. Common sense and ‘asking obvious questions’ has proved to be an effective disinfectant.