Mid-last month, Princess Latifa bint al-Maktoum, daughter of Sheikh Mohammed bin Rashid al-Maktoum of Dubai, hit our screens telling us that she was being held hostage by her family and that she was in danger.

My first thought was that there was no way she could be a hostage as that is someone who is being held by a person or persons using the hostage as a bargaining chip in an attempt to extort money or concessions from a person or group with whom the hostage has close ties, such as a family or a government. The family in this instance are not holding her for ransom or the extraction of concessions from anyone else; therefore, she is not a hostage. 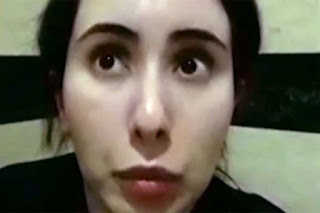 A self-described ‘hostage’ speaking from her gilded cage. She has also claimed that her life is in danger. The family asserts that she is mentally disturbed and is undergoing treatment.

My second thought was: is this another Rahaf al-Qunun, the young woman who deftly hijacked the refugee system so that she was fast-tracked (as in lightning fast) for asylum status in Canada, where a beaming Foreign Minister greeted her at the airport as a poke in the eye for the Saudis? (For details see my article ‘Manipulating the refugee system’, Breaking Views 19 January 2019.) 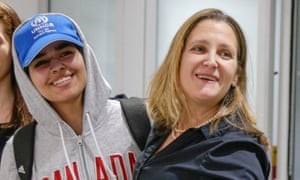 Rahaf al-Qunun, who absconded from her family while on holiday in Kuwait and locked herself in a hotel room in Bangkok, is met by Chrystia Freeland, Canadian Foreign Minister, at Ontario International Airport after being declared a genuine refugee by the UNHRC in what was truly record time

The Sheikh does seem to have a bit of a problem with his daughters. On one occasion, a British court was involved (see https://www.bbc.com/news/world-middle-east-56085734). This is no model happy family by the looks of it, but then few families of the fabulously wealthy appear to be, and those nauseatingly spoilt brats often turn out to be bolshie and can act on their impulses – and, unlike working class kids who go off the rails, are taken note of by the media when they do. Anyway, let’s get back to Latifa.

Latifa has tried to run away from home before, the last time being in 2018 when the get-away yacht she was on was boarded by commandos in international waters off the Indian coast. Later that year, she and her sister Haya had lunch with Mary Robinson, ex-UNHRC commissioner, who described her afterwards as a “troubled young woman” in the “loving care of her family”. After the ‘hostage’ story broke, Ms Robinson told the media she had been “horribly tricked” by the family on that occasion and said that she “100% believes Latifa now". 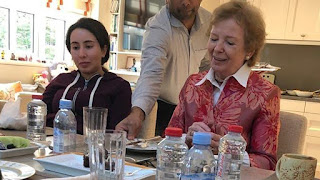 The UNHRC got in on the act and demanded that an envoy be admitted to ascertain whether the Princess was still alive (!).

The family made it known that Latifa suffers from a bipolar disorder for which she is receiving medical attention while under confinement for her own sake. In a press release, they said that she would return to public life when it is deemed appropriate for her to do so.

Princess Latifa is being confined against her will, but does this amount to false imprisonment? Persons who have been certified as being mentally disturbed and who are a danger to themselves or to others may lawfully have various restrictions placed on their freedom of movement including confinement in a safe environment – in this instance, a mansion complete with servants.

If the family’s assertions are true, there is nothing going on that warrants any accusation of false imprisonment, and certainly not of her life being in danger from her family. This latter claim could be the product of a deranged mind or it could have been a ploy with a view to doing a Rahaf al-Qunun double act the moment the opportunity presents itself.

I have no firm opinion on the Princess Latifa case, but I do on the international response, particularly that of the UNHRC.

Again we saw the UNHRC rushing in where angels should fear to tread, taking her at her word and assuming the worst to the point of demanding that they check out whether she was still in the land of the living. Again I ask whether they would have been so eager to stick their noses in had the subject been a bloke or a woman of mature years, particularly one who wasn’t adept in the use of internet communication channels using English.

Again we have seen the wrong message being sent to the Muslim world: if you are a suave and sophisticated young Muslim female and complain about being ill treated, we will believe you and try to ‘rescue’ you, and to blazes with niceties such as international protocol. It’s the ‘MeToo’ movement – ‘Believe the woman’ – and to blazes with niceties such as due process and the presumption of innocence (see my article ‘Innocent until proven guilty’ – except when a woman accuses a man of sexual misconduct’, Breaking Views 10 November 2018) – operating at international level.

Princess Latifa bint al-Maktoum disappeared from our screens as abruptly as she came onto them. She should never have been on them. In all likelihood, what we had here was a storm in a teacup that certain people in the media and the UNHRC were intent on whipping up into a tempest for their own ideological reasons. I may be wrong about the whole thing, but if I am, at least my stance wasn’t born of prejudice.

Barend Vlaardingerbroek BA, BSc, BEdSt, PGDipLaws, MAppSc, PhD is an associate professor of education at the American University of Beirut and is a regular commentator on social and political issues.

Some interesting parallels with Meghan Markle here.
Poor little rich girl seeking attention.
While the 'woke' media feed the Sheeple as much propaganda as they can muster.