In my view, Commissioner Coster is handling the situation in Wellington, commendably.

Police are the meat in the sandwich.

Commissioner Coster did not create the problem in Wellington.

The Government created the cause for the original protest in Wellington last week where former National M P Matt King was the stand out among a crowd of mostly reasonable Kiwis registering their disapproval of MANDATES.

To the dismay of many among those who had gathered to put pressure on the Government by lawful democratic protest, National sided with the Labour Green Maori cartel.

Speaker Hon Trevor Mallard exacerbated the situation by turning on water sprinklers and music. An Irony if ever, for Trevor pre parliament pedigree, as I recall my days in the police, trod perilously close being labelled a protestor of his day.

Some of us, grow up.

During the 1981 Springbok Tour, Red Squad was at the fore of the largest enduring streel brutality (including 1951 Wharf strikes) this country has ever witnessed.

Red Squad, as with the rest of the police were, the meat in the sandwich.

I know, from discussion with former, Prime Minister Rob Muldoon in Parliament after I became an MP, that based on what I told Muldoon when I was summonsed to speak with him on the telephone (at a mess military dinner in Taranaki following the 1981 Hamilton Rugby pitch invasion precipitated by default of the police), he told Commissioner Walton to invoke the “Red Squad Solution”. (1)

From that point in history when I as a mid-rank cop and second in command of Red Squad, assured Rob Muldoon that if Red Squad was let out of the cage we would win every encounter henceforth, Red Squad DID JUST THAT.

Red Squad won every battle thereafter – and some were extremely brutal. (2) (3) 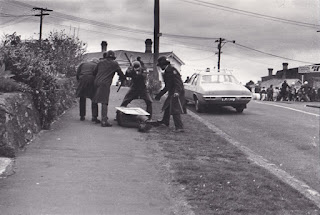 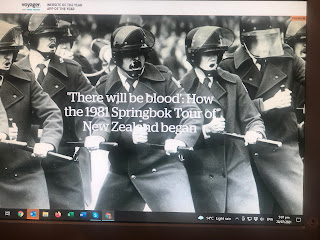 The problem for the police is, that the hatred endures to this day. As the profile name for Red Squad, I can assure all, that the Golden Chalice of Victory – was filled with poison. (2)

If Commissioner Coster unleashed today’s version of Red Squad, I have no doubt that the police will win the battle.  But as with Red Squad, he will lose the war.

Damocles Sword lingers above Commissioner Coster like a guillotine.

Do I favour the Red Squad Solution?

In my view, the solution is political – and fast. Prime Minister Ardern must remove the mandates.  The justification for the regime she has imposed on New Zealand, as well intended as it was, has evaporated.

And, in my view, it’s time for a new political party.  Watch this space.

Ross Meurant, graduate in politics both at university and as a Member of Parliament; formerly police inspector in charge of Auckland spies & V.I.P. security; currently Honorary Consul for an African state, Trustee and CEO of Russian owned commercial assets in New Zealand and has international business interest.

I like the last sentence.With a statesman figure,commonsense,wind back-halt all the nonsense thats being going on over the past 4yrs, re-unite the population A John Howard/Bob Hawke type person.I can't see that with the current batch of party leaders.

If people actually viewed the protesters through a non- judgmental lens, they would realise it is totally inappropriate to use force. There are many women, children and a few older people participating in the protest.

I can't wait for this new political party. I hope the minor parties put their heads together and unite as they have some great candidates.

In 1981 the protests were against the situation in a foreign country, this protest is for the very survival of our democracy and way of life.

Mr. Meurant, so BRILLIANTLY scribed. I totally agree with you ONE THOUSAND percent. Mr. Coster is now damned if he does and damned if he does not and that is NOT his fault. Janine (above) - your thoughts are also spot-on. MISS Jacinda must GO. Brian W. (another ex Copper).

Very well said. I think this is exactly what the Commissioner Coster is trying to avert.

On top of this, many had suffered and lost their jobs because there were no alternatives by the governemnt's mandatory requirements - much like a communism world. They should have planned alternatives as such providing rapid antigen testing before entering the work space and proving 3 days prior to they were Covid-19 free. Look at how man unemployed are out there and struggling?

Labour party is indeed one of the most communist party as we learnt it very well for their past ruling and they should not be ruling New Zealand. We have a major problem ahead and once again, we are into a very bad situation in the future.

NZers fought against the concept of apartheid by demonstrating in 1981. Now Labour is trying to introduce our own version of apartheid. Surely reason enough to demonstrate again? This is yet another issue that is eating into the very heart of our country, and greatly upsetting many everyday Kiwis.

A fellow catering free meals told me they planned for 55,000 on the saturday. Judging from the shoulder to shoulder crowd that number was reached. Good kai too. Amazing infrastructure keeping rubbish off, alcohol out, toilets running, food lines coming in. Child care. History and generosity in Kaumatua meeting tent. Well built stage over the steps and covered from the Parliament camera running live feed ; paths kept open and swept in some cases. Tents everywhere you looked on the grounds and out on surrounding berms and foliage lots of other building entranceways. HUNDREDS of vehicles. THOUSANDS of people. All peoples. Carrying placards of relatives damaged by mandate. Many I spoke to had families broken apart by this. A Kenyan said in Kenya, the army would have smashed them by now. A young Czechoslovakian told me they know what communism is, and the first bells of warning are sounding. Family groups are in their hundreds. Fit, tanned. Men and women from ALL walks. Libertarians. Shy locals; Hari Krishna as third food tent..or series of tents..a huge operation of volunteers running a ship tight enough to keep order and watch for provocations. No nazi that I saw. No nooses and any deviation from purpose -immediate removal of the mandates- very quickly sorted by watchers determined to keep the protest authentic. A couple of undercover types embarrassingly 'of the agencies'.. All kinds packed to the gills. They are there because this government propagandised the fear and loathing INTO them. Ardern and the CDC - with their local enablers - cannot possibly justify their measures let alone discuss with the protest because they simply cannot give in; instead blame ‘overseas influences’. Yep. Overseas VAERS data. Overseas evidence of global power overreach disguised by covid. Evidence of this as a bioweapons attack on the free peoples. Evidence of prophylaxis success in a dozen countries not requiring VAX uber das alles. The data drop by Thomas RENZ /US DoD mass vax program spiking every conceivable illness. DATA from Luc Montagnier (RIP) finding HIV inserts into the original gain of function sequence - Insurance death claims in USA up 40% all driving demand for immediate cessation of aggression against the people of New Zealand. Speaking to which; are Tangata Whenua; powerfully influencing conduct - law abiding behaviours toward everyone and everything except the mandated experimental toxin and those allowing it passage. I am certain Maori present and active on site will be unsurprised at media coverage insinuating ’nazi (therefore pakeha) extremists run the show. They do not.

Instead we have reasoned demands for re-employment of those losing their jobs by diktat. Reimbursement of lost incomes. Immediate cessation of mandates, mandatory recording of ALL adverse effects so we can get a proper handle on the real damage this incredible experiment has cost us. Removal of masks except for those with respiratory illness. Due process of ALL prophylaxis medicine trial data. The removal of the COVID EUA/legislations. Understanding covid as a bio-weapon. These are the influences defining the moment.

The well funded media, up on the Terrace, could ask Adern of the ‘overseas influences ‘ in HER Governing. What did she learn from the war mongering Liar BLAIR while working in his communications office after the 911 demolitions? Did she too learn how to turn lies into truth? What place does her role in Adolf Schwabs WorldEconomicForum and his ‘young leaders’ play in this well orchestrated covid psyop? Alongside Morrison and Trudeau and Zuckerburg; the whole lot of them infiltrating governments around the world in LOCKSTEP ? That would make interesting reading.

remo, thankyou for your enlightened and thought provoking comments. People are finally beginning to understand what is really going on. Well said.