Every day the news headlines tell us all of an out of control crime wave that is growing to tsunami-sized proportions. Instead of law and order, we’ve got chaos and mayhem. The problem has only gotten worse under new Police Minister Chris Hipkins.

Businesses in the Auckland beachside suburb of St Heliers are calling for regular police patrols following a random and unprovoked stabbing at the local Four Square store last night. […]

Orakei councillor Desley Simpson said her thoughts are with the victim as he recovers and reached out to the Four Square owners who are shocked and doing all they can to support their staff.

She urged local residents not the let the incident affect support for hard-working retailers, saying they need support more than ever.

“I know the police are stretched and if I could wave a magic wand I’d have more policy and easier ways to access crime prevention funding.

“That’s in the hands of central government. They really need to step up and show they understand and are proactively assisting, not just creating barriers,” Simpson said.

Here’s an idea: how about scrapping the plans for the ridiculous gun register and instead spend the hundreds of millions of dollars allocated for that on actually chasing criminals and solving crime. 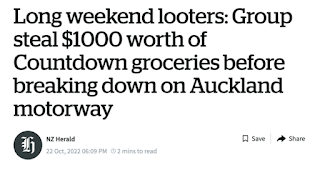 Kate Malster was paying for her groceries when she saw a woman with a full trolley running full speed towards the exit of the Greenlane Countdown.

Employees from Countdown were shouting “Stop, don’t do this” to the woman before she exited the store.

Malster heroically chased the woman into the car park of the Greenlane supermarket, attempting to grab the trolley and telling her to stop before she escaped.

The woman reportedly pushed the trolley to two other people that were waiting at the rear-end of the getaway car and unloaded the goods.

“I have never seen food go so fast from a trolley into the back of a car… It was absolutely orchestrated so this definitely isn’t their first time,” said Malster.

Now we have looting in Auckland supermarkets. Crime is out of control in New Zealand, and especially in Auckland. What are our Police doing? They are dancing in the streets:

The Government needs to go back to locking criminals up in prison, like we used to. Instead we’ve got Police focusing on criminalising people deemed to be fit and proper persons and virtue signalling instead of policing.

The streets of Auckland are now out of control. We are sick of it, and soon enough people are going to start taking measures to defend themselves and their property, as it is as obvious as Jacinda’s teeth that neither the Government nor the Police can do it anymore.

Are the perpetrators simply "imagining decolonisation" as they have been repeatedly exhorted to do (notably by Moana Jackson.)

The labour govt and hipkins have stated on many occasions that they do not believe in prisons for maori. Because of this woke ideology, crime will escalate to the point where night curfews are common place for all of us. Yes night curfews have happened in nz before during the chch eartquakes where no one was allowed out after 10pm i think it was. If you were seen driving after this time you would be pulled over and asked why you were out. The kiwi way of life will soon no longer exist.

I am in complete agreement with you Cam. At bottom I think this is racism again- the government feels unable to act in case it looks 'racist' to notice the ethnicity of the offenders, while the poor blinkin' owners of the convenience stores, who are largely Asian are given scant sympathy. I am ashamed.

I never thought I would be in a position to say this but our kids have been getting away with way too much. I honestly think our shop keepers who are doing their best should now be armed. Yes this is not the best out come but how much longer are we going to put up with this rubbish. Also charge the parents because obviously they don't give a f . People may say I am a "well to do" person but in all honesty I'm broke as the next mf as I'm on a benefit so yes I'm throwing stones in my own glass house