Guy Hatchard: New Zealand is Stuck in the Dark Ages

The fourth year of the pandemic has already started, and we are still left wondering about the whys and hows.

We could easily be participating in a medical psychological drama on Netflix entitled ‘LIFE’ with a very uncertain outcome and lots of anxious episodes.
Two days ago, Dr. Ayesha Verrall, Minister for Covid-19 Response, belatedly replied to my letter of 18th August entitled “Current pandemic policy and protocols are out of date,” which asked the government to consider published research findings from Thailand, Qatar, and Iceland. It also requested that vaccination status be included on death certificates in order to aid research. In her reply, Dr. Verill noted that the government has now ended the Covid-19 Protection Framework and added:

“While New Zealand watches closely how other countries are dealing with the response to Covid-19, it is important that we make our own decision when it comes to how we manage the virus, as many factors determine our response, such as vaccination rates, community transmission, and the pressures on our health system.”

Dr. Verill is also the Minister of Research, Science and Innovation, but she managed to avoid addressing any of the specific points I raised in my letter. The government is going to make up its own mind without worrying too much about what is going on in the world or even who among the dead are vaccinated. That just about sums up the current state of New Zealand Covid science.

Let’s take stock. What do we know has happened, and what don’t we know? Our aim here is to find out what we can expect going forward.

I spent a few hours this week studying the Human Mortality Database. Excess all cause deaths is the difference between the historical long term average (2010-2019) and current data. Crucially I’ve proportionately adjusted the figures down to account for New Zealand’s rising population. This has the effect of significantly reducing the apparent number of excess deaths.

In 2019 there were 1,154 excess deaths compared to the long term trend

These figures have been particularly influenced by government policy. The closure of our borders to foreigners for long periods in 2020 and 2021 and the use of quarantine, lockdowns, and ‘track and tracing’ effectively kept the case numbers of alpha and delta very low indeed during these years. 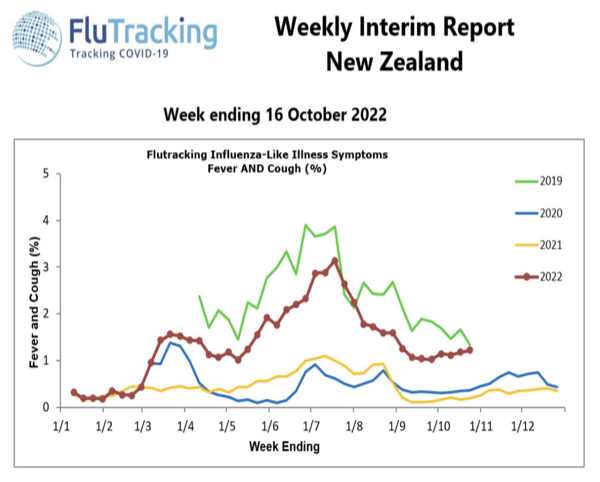 Click to view
There were 1,576 more deaths in 2021 when compared with 2020. In both years, the effects of government policy were similar, and rates of flu incidence were low in both years. mRNA Covid vaccination was rolled out beginning at the end of March 2021. Beginning at the end of April, excess deaths were running considerably ahead of 2020. During weeks 17 to 36, there were 1,319 more excess deaths in 2021 than in the equivalent period in 2020. These were the weeks of maximum Covid jabs, and the total excess deaths during this period account for 84% of the 2021 excess over 2020.

The high number of excess deaths in 2022 up to the end of September (2,864) is unusual. There were records broken. Week 30 (end of July) was 26% above the historical average, even after adjusting for New Zealand’s increase in population. This corresponds to a wave of Omicron infections, but the total significantly exceeds the number of deaths directly attributed to Covid.

Here’s the rub, in New Zealand, we do not have access to sufficient data that would help to ascertain whether Covid vaccination was a key contributing factor in the higher excess death totals in 2021 and 2022. In order to investigate this, we would need data on the cause of death, date of death, vaccination status, age, and date of vaccinations for all deaths. This information has not been published. Nor does it appear that there is any plan to release this data in the future. We are being left in the dark.

If anyone is telling us that they are sure Covid alone is to blame for excess deaths (and some are), they are either hoaxing or deliberately obfuscating. There is insufficient data to reach this conclusion. The exact causes of high excess deaths in 2021 and 2022 remain unknown, or rather the information which would determine this has been withheld from public scrutiny.

The principle barrier to understanding has been the Ardern doctrine that the government should be our only source of truth. As a result, virtually all our sources of Covid information emanate from Ministry of Health experts and from government sponsored sources including funded MSM articles and so called disinformation experts. These channels are all pro-vaccine by design.

This has effectively bypassed the normal channels of scientific investigation. Ministry of Health bulletins are not peer reviewed by independent scientists. Their methods of data collection and analysis are not subject to scrutiny. Their source data has not been made publicly available. Consequently, almost no papers of scientific merit studying NZ data have been published in learned journals or presented at international conferences. What are our New Zealand scientists up to? They have either looked the other way or worse become complicit in government censorship. We have been left with a steady diet of what amounts to little more than vaccine propaganda.

Overseas the situation is not so black and white. There is a huge volume of journal publishing, and there are conference presentations and public debates. Watch Dr. John Campbell discussing UK excess deaths among the young. There are open data sets which can be analysed and discussed. Take for example this article by Steve Kirsch on Substack which reviews a current US scientific controversy—is there a peak in deaths following vaccination? A lawyer whistleblower points out that official US Medicaid data shows a peak in death rates 17 days following Covid vaccination. 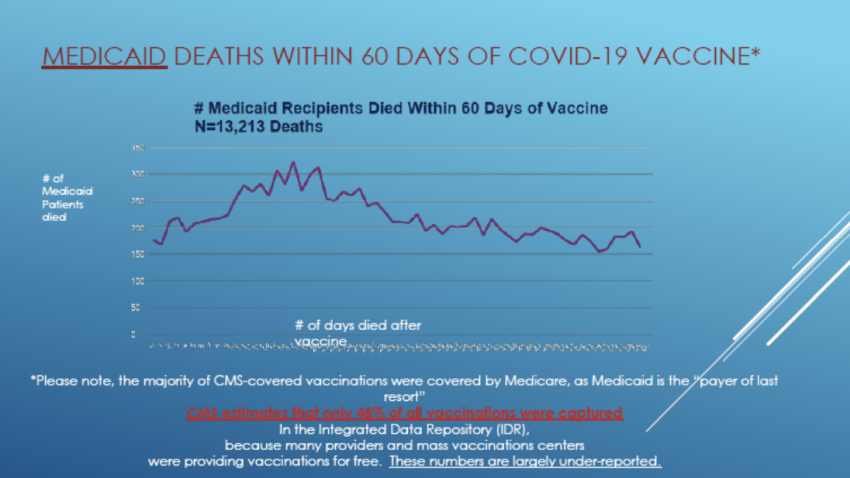 Click to view
University of Pennsylvania biostatistician Prof. Jeffrey Morris attempts to debunk the claimed effect, but in the process accidentally confirms that the effect size is stronger after the second dose. In other words, each subsequent vaccination is followed by a larger number of deaths which supports a causal connection between Covid vaccination and higher death rates. This is precisely the sort of detailed discussion that could shed light on the NZ excess all-cause mortality peaks, but this has not happened here.

Click to view
We only have indicative data up to mid July 2022. Up until this point in time, there was objective and complete data on deaths where there had been a positive Covid test up to four weeks prior to death (subsequent adjusted data released by the Ministry of Health is tainted by subjective judgements about cause of death—it does not include all deaths).

This data shows that any protective effect of Covid vaccination wears off quickly and is consistent with the findings of other studies showing any mRNA vaccine protection enters negative territory after three months.

It is true that New Zealand is in a unique situation. The reasons for this are various—climate, exercise, diet, ethnicity, economic opportunity, education, health services, etc. We are predominantly using the Pfizer vaccine, but the UK, USA and other countries are using a number of different vaccine types which have different adverse effect profiles, but that doesn’t mean that key overseas experience and research findings can be sidelined.

Dr. Verill underlined the fact that our hospital systems are under pressure. So what are we going to do about it? Do we suspect that Covid vaccination may be exacerbating the situation? I do. To understand the causes, we need information about incidence of hospitalisation by type and severity compared to prior years. For example, are rates of cancer or cardiac incidence elevated?

But there is a brick wall when it comes to dialogue with the government, and the opposition parties are no different. That is why we are stuck in the dark ages. Dialogue and debate is the very foundation of democracy, but here in New Zealand it is missing in action. Excess deaths are up and the government information vacuum means that families and the public remain under-informed or mostly uninformed or even misled about the causes.
Dr Guy Hatchard is a former senior manager at Genetic ID, food testing and certification company. This article was first published HERE

Thanks Guy. It is nice to know that you are recording this information and sharing it with us. Hopefully one day it will mean something.
It is important because some people, and one of my sons (who is a scientist) is one of them, have faith in the main stream science announcements. He thinks I am an uneducated, right-wing ignoramus when I point out alternatives. I am hoping that one day he will be enlightened/eat humble pie.
MC