Ian Bradford: Methane Cannot Cause Anything

Are cows causing global warming?  No, it’s a lot of bull!

The IPCC, the Intergovernmental Panel on Climate Change, formed by the United Nations, initially declared that humans were putting Carbon Dioxide into the atmosphere and that was causing global warming. Then that was changed to climate change because of the embarrassment of at least 15 years of no temperature change from 1998, and then a cooling in recent years.  Then all sorts of weather events were put down to more CO2and finally methane CH4 also became a problem. Cows were in the firing line and it was pushed that we should give up eating meat and do away with cows. Perhaps we would have no milk either!

What are “greenhouse” gases?  Greenhouse gases are those which absorb radiation from the earth, essentially in the infra-red range. Most of the argument revolves around the “greenhouse effect.” The basic principle is that short wavelength radiation from the sun, which includes Ultra Violet A, Visible Light, and Infra Red, passes through the atmosphere and reaches the earth causing it to warm. Now the IPCC states that the earth at about 15 deg C, gives off longer wavelength Infra- Red radiation (heat), and this heat is absorbed by the CO2 and CH4 in the atmosphere and then they re-radiate to warm the earth. As more CO2 and CH4 enters the atmosphere this warming increases.

The Electromanetic spectrum is shown in the diagram below. The wavelength is shown in metres. The visble part is a very small part of the entire spectrum. 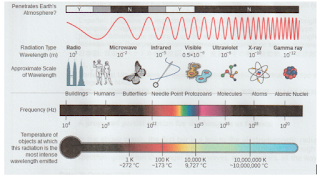 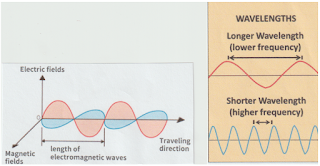 The distance between two crests (or troughs), of  a wave is the wavelength (see diagram on the right). The wavelength can be expressed in metres but is often expresed in micrometres if looking at the visible range. Micrometres are written µm and a micrometre is  a millionth of  a metre.

A word about actual greenhouses:  The same radiation from the sun strikes a greenhouse. The glass allows visible light and a small amount of shorter wavelength Infra Red to pass though.  All objects within the greenhouse are heated. Like the earth, these heated objects give off Infra Red Radiation, but this is of longer wavelength than that which entered. The glass will not pass this out. Consequently, the greenhouse builds up heat. However, if windows are opened, especially in the roof, much of this confined heat escapes into the atmosphere, (by convection).

There is no comparison between a greenhouse and the earth/atmosphere system. In a greenhouse the hot air is confined. No such confinement takes place in the atmosphere. In this respect the term “greenhouse gas” is a misnomer.

The atmosphere is divided into horizontal  layers.

LAYERS OF THE ATMOSPHERE 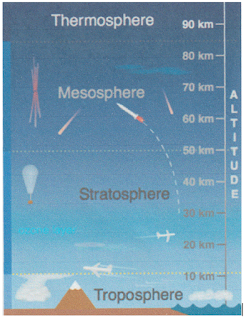 If you sit in front of a heater you feel heat, and that heat travels to you by the process of radiation. If you put your hand over the top of the heater you also feel heat. Some heat reaches you by radiation and some by convection. That is, warmed particles of air are rising up from the heater (Hot air rises).

Three scientists  G.V. Chillingar,  O.G.  Sorokhtin,  and  I. F.  Khilyuk,  working at the Russian Academy of Natural Sciences , The US Section ., Los Angeles, USA,   asked the question  whether increasing contents of Methane and Carbon Dioxide in the atmosphere cause global warming.

The climate alarmists claim that the increasing amounts of Carbon Dioxide and Methane in the atmosphere is causing drastic changes in the earth’s climate.  The anthropogenic theory of global warming occurs because the so called greenhouse gases absorb radiation from the Earth, re- radiate it, and this warms the Earth. As a result of this, trillions of dollars have been spent on a fruitless cause.

This all started because the Swedish chemist Svante Arrhenius  in 1896 proposed that the earth’s atmosphere was being heated by the greenhouse gases.  This idea was taken up by the climate alarmists and forms the basis of any decisions made by the UN/IPCC. So we have had predictions of large sea level rises, and temperature increase of up to 5 deg C by the year 2100.

Any conventional anthropogenic theory put out by the IPCC always assumes the heat is transferred from the Earth into the atmosphere by radiation.  That is by travelling electromagnetic waves. The method of heat transfer was thoroughly investigated by the three scientists above. They were able to establish that most of the heat left the Earth’s surface by convection, not by radiation as the IPCC/UN have always stated.

Now the heat released from the surface of the Earth occurs by convection, radiation and water vapour condensation in the atmosphere. Using the relevant data the scientists  found the following :

The IPCC and climate alarmists allege that radiation leaves the earth and enters the troposphere where it is absorbed by Carbon Dioxide and Methane which re-radiate seemingly more radiation back to the Earth, and as a result the Earth warms.  So we won’t confuse the issue by looking at convection. We need only be concerned with radiation.

Since we are looking only at Methane emitted from ruminants we need to make a correction for this. It is estimated about 14% of all Methane emissions come from ruminants. So 14% of 0.00017 gives 0.00002 approx.

That means there are just 2 Methane molecules in every ten million other molecules.

Now what about the 8% of heat transferred by radiation? This is a very small amount to start with. This radiation has to find one methane molecule among 5 million other molecules. So there is a good chance the radiation will be absorbed by something else.  Laboratory experiments putting successive gases in a tube, shining radiation of various wavelengths through the tube and collecting the radiation with a spectrometer, show that “greenhouse” gases do not absorb all the radiation falling on them.  They only absorb radiation of certain wavelengths. In the case of Methane it only absorbs radiation in two narrow bands centred on 3.5 microns and 8 microns. A micron is a wavelength of a millionth of a metre. The principal components of air, Nitrogen and Oxygen absorb mainly ultra- violet light, nothing absorbs in the visible wavelength range. The so called greenhouses gases absorb in the infra-red region.

The graph below gives the absorption spectra of greenhouse gases.  In other words the graph gives the wavelengths of the Infra Red radiation , (that is the heat leaving the earth by radiation), that the molecule of that gas will absorb. I have drawn vertical lines though the peaks of Methane.   (Lasse Amundsen and Martin Ladro,  Dr Peter Langdon Ward, Spencer Weart and Raymond Pierrenumbert,  Dr Tom Sheahan)

µm is micrometres or microns

Note that the vertical lines pass through at least part of the absorption spectrum of water. Water vapour by the way means just water molecules. (a gas)

Now water vapour averages about 2% in the atmosphere. It is also a greenhouse gas - the main greenhouse gas, as it absorbs Infra Red radiation in those little blue shaded mountains. If there is an average amount of water vapour then there are 100,000 times more water molecules than a single molecule of Methane. So starting with a small amount of radiation to begin with, it is highly likely that all this radiation will be absorbed by water vapour (since there is so much of it), before it actually reaches a Methane molecule. It seems clear then, that Methane plays virtually no part in the warming of the earth.  Even if we took ALL the Methane emitted from the earth it still would not warm the earth or do anything. Water vapour absorbs any heat radiation from the earth long before it reaches a Methane molecule.

Reducing Methane by avoiding meat and cutting down on cow numbers will make no difference to climate. A considerable reduction in meat consumption will however, increase the chance of malnutrition and nutrient deficiencies, which is something never mentioned by the anti-meat, climate alarmist disciples.

The tiny increases in Methane associated with cows cannot be the basis for sane regulations or national policy.

Footnote :  Any Methane (which is a light gas),  that makes it up to the stratosphere where most of the ozone is, will combine with the ozone to produce Carbon Dioxide.

The other product is water.  Methane has a relatively short life in the atmosphere, between 8 and 12 years.  The Methane and water vapour in the stratosphere shield the Earth from solar radiation and actually lower the earth’s average temperature.

Ian Bradford, a science graduate, is a former teacher, lawyer, farmer and keen sportsman, who is writing a book about the fraud of anthropogenic climate change.

I have written this article especially for farmers. Today the farmers(groundswell), are protesting all over the country. They are saying they are one of the most efficient lot of framers in the world and why are they being penalised if other farmers elsewhere are not efficient, and are not being penalised. They are on the wrong track. Farmers should as a group, be protesting against the gigantic fraud of human caused climate change. Humans are NOT causing climate change. Your cows farmers, are NOT doing anything. Come on farmers read this article and my previous article. It would help us all, if you protested against the real issue. We need to pull out of the Paris Climate Accord, Stop the Emissions Trading Scheme, Abolish the Climate Change Commission, Stop the tax on petrol and diesel vehicles, and take off climate tax on fuels. This would save every household a lot of money. Many are struggling at present. The country thanks to Ardern and Shaw, are spending billions of dollars on a fruitless exercise. You cannot stop climate change. It is a natural process caused by the sun, oceans, clouds and occasionally volcanoes. So come on farmers please wake up.

Three Cheers Ian, for standing up to the false narrative.

It is actually blatant lunacy for New Zealand to go down this self destructive path of slavishly destroying our nation to satisfy the demands of the climate change activists.
Especially so, when there for all to see is the FACT that New Zealand's CO2 emissions are only 0.17% of total human global emissions !!

Good that we get to read this but Ardern and her climate minister Shaw need to read this as I am sure they have no idea of the scientific explanation to earths complex weather systems.

Methane , CH4 and carbon dioxide, Co2 are chemicals composed of Carbon, Hydrogen and Oxygen. Cows do not produce any of these elements but simply obtain them from the grass they eat and the water they drink and reshuffle them into different chemical compounds. This is a recycling process complementary to photosynthesis.

The problem we have is that everyone who spouts on anthropogenic CO2 from King Charles through Greta to Shaw etc. have no scientific training and would not understand Ian's blog even if they could be bothered to read it. Scientific education in the Western world is so underrated that most of the general public equally just cannot understand the arguments and the media is stuffed with scientifically illiterate columnists who just parrot self serving sound bites. I have a dozen well argued books written by practising scientists from around the world all debunking the CO2/CH4 scam and which , in a sane world , would make front page news. The information is all out there, like Ian's, for all to read. Cheers. Gerry