Geoffrey Miller: Is it time for Jacinda Ardern to head to the Middle East?

But perhaps surprisingly, Ardern has not attended a UN climate change conference since she became New Zealand’s Prime Minister in 2017.

Had New Zealand’s Covid-19 situation allowed for it, Ardern would have almost certainly joined the many other world leaders who went to COP26 in Glasgow last year.
At the time, New Zealand still had strict border restrictions in place. These included long waiting lists for hotel quarantine spaces upon return – which made overseas travel by Ardern politically unpalatable.

Last year’s COP26 in Glasgow was heavily attended by leaders because countries are expected to make major new climate pledges every five years.

The main outcome was the Glasgow Climate Pact, which prioritises taking action on climate change in the 2020s and limiting the rise in global average temperature to no more than 1.5 degrees. To this end, New Zealand committed to reducing its net emissions by 50 per cent by 2030, when compared with 2005 levels.

By contrast, this year’s COP27 in Egypt’s Sharm el-Sheikh is billed as being about ‘implementation’ and on working on the detail. Leaders will largely speak in roundtable formats, rather than at UN General Assembly-style plenary sessions.

Nevertheless, the summit will still be a major event. Egypt says around 90 heads of state have sent in an RSVP – and US President Joe Biden and French President Emmanuel Macron have already confirmed they will attend.

Israel, which occupied the Sinai Peninsula where Sharm el-Sheikh is located from 1967-1982, will also send a large delegation to its neighbour and will have a dedicated pavilion at a COP event for the first time. Ran Yaakoby, Israel’s ambassador to Wellington, wrote last week that ‘collaborations’ with the Pacific pavilion that includes New Zealand are planned.

On the other side of the ledger, the United Kingdom’s Rishi Sunak is skipping the summit and Australia’s Anthony Albanese is unlikely to attend – although both Australia and the UK were represented by their then respective leaders at Glasgow in 2021.

Of course, the ostensibly more practical focus of COP27 might appeal to Jacinda Ardern – and it would follow on from her trip to Antarctica in October that sought to highlight problems caused by climate change.

Earlier in October, the Prime Minister also personally unveiled a bolder-than-expected blueprint to force New Zealand farmers pay for agricultural greenhouse gas (such as methane) emissions from their livestock. The draft plan led to major protests within New Zealand’s agricultural and rural sector.

New Zealand was one of 105 countries that signed up to the Global Methane Pledge in Glasgow in 2021, under which signatories promised to cut methane emissions by 30 per cent by 2030.

While Ardern’s attendance at COP27 in Sharm el-Sheikh would be hugely significant in its own right, a trip would also make sense for other reasons.

First and foremost, the visit to Egypt would also be Jacinda Ardern’s first trip as Prime Minister to the Middle East.

Despite its strategic and trading significance, the Middle East has probably been overlooked by New Zealand in recent years.

John Key’s visits to the Gulf and then Iraq in 2015 were the last times a New Zealand Prime Minister visited the region.

Nevertheless, Ardern already has a significant profile in the Middle East, largely built on her response to the Christchurch mosque attacks in 2019. Her landslide election victory in 2020 was covered heavily by Arabic-language media.

A visit by Ardern to Egypt would be the first by a New Zealand Prime Minister since Helen Clark went to Cairo in 2007 to open a New Zealand embassy there.

For New Zealand, the trip would probably come at just the right time.

Exports to Egypt are currently surging – reaching almost $NZ400 million in the year to June, the highest level since 2016.

New Zealand’s links with Egypt date back to the troops who were stationed in the country during World War I and World War II. 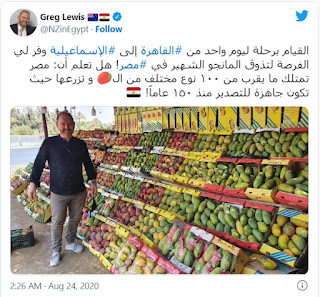 Click to view
Elsewhere in the Middle East, the trade picture is similarly optimistic.

When taken as a single market, the GCC is both New Zealand’s seventh-biggest export market and overall trading partner.

It’s no wonder then that Damien O’Connor, New Zealand’s trade minister, cites the GCC as New Zealand’s current priority when it comes to free trade negotiations.

Of course, authoritarian regimes are a major complicating factor when it comes to New Zealand’s trade deals with the Middle East.

Activist Naomi Klein recently criticised Egypt’s hosting of COP27 as ‘greenwashing a police state’, pointing to the poor human rights record and treatment of political prisoners by the country that has been ruled by Abdel Fattah al-Sisi since he led a military coup in 2013.

When asked in relation to his Gulf trade focus about how New Zealand balances trade against human rights concerns, O’Connor largely dodged the question and referred the matter to the foreign affairs minister, arguing ‘there are commercial relationships that are separate’.

Of course, New Zealand already has extensive experience in navigating tensions between human rights and trade in its relationship with China, its biggest trading partner.

New Zealand has had a diplomatic presence in the Middle East since 1975, when it opened an embassy in Tehran.

The news last week that two New Zealanders had been released unharmed by Iran – after being held for several months – showed how a longstanding diplomatic relationship and quiet work behind the scenes could pay off.

The story and the growing street protests in Iran serve as reminders of the complexity and difficult choices New Zealand faces in its relationship with the Middle East as a whole.

Aside from COP27 in Egypt, other major global events are currently being staged throughout the Gulf.

In Saudi Arabia, the Future Investment Initiative event often called ‘Davos in the Desert’ has just wrapped up in Riyadh. In the UAE, the Global Media Congress – a major summit on the future of the industry – and the Formula One Grand Prix will soon get underway in Abu Dhabi. And Bahrain will host foreign and defence ministers at the flagship Manama Dialogue event run by London’s International Institute for Strategic Studies (IISS).

The world’s eyes will then shift to Qatar, as it hosts the FIFA World Cup from November 20 until 18 December. It will be the first time that a country in the Middle East has hosted the world’s biggest sporting event.

The Middle East is likely to continue to increase in significance for New Zealand.

The outcomes at COP27 in Egypt will have a direct impact on liveability in the Middle East.

Like the Pacific, the Middle East is on the frontlines of climate change – and even hotter temperatures will make further social unrest more likely.

That means climate change will have a direct bearing on New Zealand’s future exports to the region.

There is much at stake.
Geoffrey Miller is the Democracy Project’s international analyst and writes on current New Zealand foreign policy and related geopolitical issues. He has lived in Germany and the Middle East and is a learner of Arabic and Russian. This article was first published HERE

Is it time for Jacinda to head for the Middle East?
Absolutely! Iran would be nice...as long as they seize her passport on trumped up charges of spreading DISINFORMATION. A good lengthy spell of cultural re-education to follow.
See how she likes it!

So we use a climate change conference to push for more exports from us. All of which relies on burning tonnes of oil to make it happen far into the foreseeable future.

At the same time, we punish the exporters, even though they are some of the most efficient in the world.

Why have her visit the Middle East and bugger up what looks like a growing business?
She has the Midas touch, everything Labour touches turns to shit !!
Keep well away.

An excellent idea DeeM.
What say you and me dub in and buy her a one way ticket ?