Supported Living Payment is for people who have, or care for someone with, a health condition, injury or disability that limits their ability to work.

Please note the graph's Y axis is not zeroed in order to show the increase more clearly. 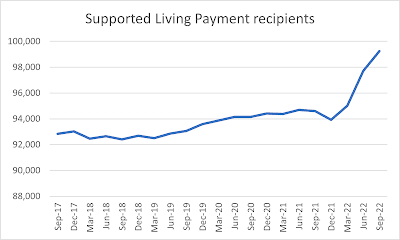 In one year, the number climbed by 4,659 or almost 5 percent. Half of the increase is down to psychological and psychiatric conditions; the gender bias is female and most of the increase is among 55–64-year-olds (though no age group has shown a decrease). NZ Europeans have the largest increase (though it looks proportionate to their share of the population). There is no increase in carers receiving the payment. I would hazard a guess the increases in cardiac, musculoskeletal and cancer conditions reflect delays in diagnosis/treatment - in other words, a failure of the health system.

Sole parent support is on the way back up again though some of the increase is because mothers were transferred back from Jobseeker Support when the subsequent child policy was removed. 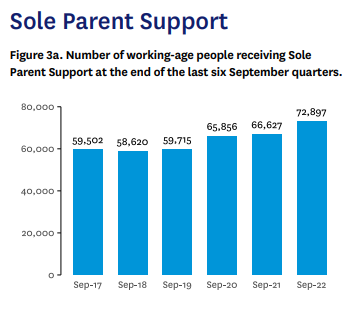 Perhaps the most important statistic - the number of children reliant on benefits - climbed through the year to September and now sits at 209,127. Remember that whenever you hear the PM maintaining a success in child poverty reduction. 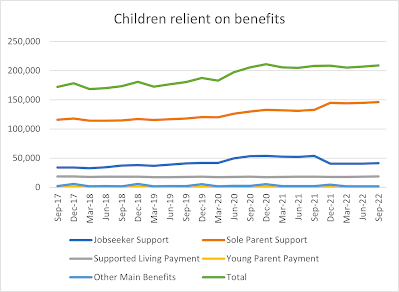 And finally, there are:

That's 11.1 percent of the 18–64-year-old population and not far off the population of Christchurch.
All of this against record low unemployment.

11.1% of working age adults are receiving a benefit of some sort.
That's a figure to be ashamed of, not proud of.
Our government will likely disagree.

They are turning NZ into a welfare state on steroids. They're probably too dim to see that the more people that claim a benefit, the fewer non-claimants there are to pay for the benefits.

I'm sure Grant's got it all in hand. Borrow, borrow, borrow....which is just deferred taxation.

I suspect, in years to come, when this terrible woke, socialist ordeal has run its course, other countries will hold up NZ as the prime example of why socialism is such a disaster...even for the beneficiaries!
And why electing a bunch of career politicians, who cut their teeth on Left-wing campuses, and have no practical or real world experience at running anything should never be in charge again.