Cam Slater: The Rest of the World Plays Catch Up on Jacinda Ardern

Last year I wrote what has become The BFD’s most popular article, The Good, The Bad and the Ugly, where I explained why it was that I thought Jacinda Ardern is evil. While the rest of the world plays catch up on Jacinda Ardern it is perhaps timely to look back at what I said.

The real evil was her politicisation of the Police force, coupled with her draconian lockdown rules, the creation of a Stasi-like snitch culture, creating a situation where mates are turned against mates, families are splintered and rent apart by the medical apartheid she has implemented; and her scapegoating, demonising and radicalising the unvaccinated and destroying social cohesion with her divisive, nasty, evil policies.

She said she never lies; she told us last year that Kiwis would not be penalised if they chose not to vaccinate, yet that is exactly what she has done: introduced social ostracism and punishments for daring to have free will. That is evil.

She is manipulative in the most extreme manner, like all sociopaths. Why else would she use sustained propaganda and well-known brainwashing techniques to tell us that ‘They are Us’…except for the unvaccinated, then ‘They are Us’ is discarded. ‘Team of Five Million’ was a lie, because she has now separated New Zealand into ‘Us and Them’. What else can you call it other than manipulative to forbid the use of hairdressers unless you can prove you’d been vaccinated? That particular piece of nastiness was aimed solely at those naughty women who refuse to comply.

Removing freedoms from everyone, and then giving back the vaccinated some of those freedoms while callously using the media to help gaslight everyone into believing government permissions are freedoms, at the same time as creating two classes of citizen, is even nastier and evil. She’s convinced over 70% of people that this divisiveness and nastiness is perfectly alright. She’s said it is OK to discriminate. She’s not even passed any laws to push her mandates; she’s just let businesses become her brownshirts in ostracising and demonising the unvaccinated. She’s allowed Aucklanders to be scapegoated even as she wrecked their businesses, jobs, and dreams. It is never OK to discriminate. Yet that is what this evil woman has done.

The Kiwi ethos of egalitarianism was slaughtered on the altar of Covid, and the knife used to cut its throat was wielded by Jacinda Ardern.

Add to that the racial divisions she has fostered and extended through her government, and we as a nation are now on the cusp of the destruction of everything Kiwis once stood for. The Kiwi dream has become a dark and awful nightmare, where we live and exist only with the permission of the government.

We are more divided than ever before. We are meaner, harsher and nastier than before. Her actions did that. The evil is that she pretended it was kindness.

That was how I saw Jacinda Ardern at the end of 2021, and nothing has changed that would budge me from that position. In fact, there is plenty more now that only adds to my heart-felt belief that she is evil and divisive.

But now the rest of the world is catching up. Even left-wing journalist Glenn Greenwald thinks she is a tyrant, after her speech at the United Nations where she announced she wants to censor and clamp down on the internet and compared free speech to “weapons of war”. 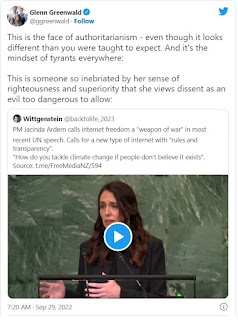 Greenwald has 1.8 million followers on Twitter, has won multiple journalism awards and doesn’t like censorship. The video has been viewed by over 800,000 people, been retweeted over 5,000 times and has made Fox News.

Daily Wire has produced a list of notable quotes about Ardern’s tyrannical speech:

* Dan Bongino, political commentator: “One of the most dangerous speeches you’ll hear this year, or next. The liberal totalitarian impulse is increasingly evident.”
* Adam Baldwin, actor: “Things nasty rhetorical radical communists say: ‘… the values of free speech that we [Leaders™] value so highly, but…’”
* Bev Turner, media personality: “She doesn’t like ‘chaos.’ Remember the opposite of chaos is total control. As she says they have ‘weapons’ to tackle anything which challenges HER version of truth. She really is the worst type of totalitarian leader using the needs of the collective ‘for your own good.’ Terrifying.”
* David Harsanyi, The Federalist: “Flat out authoritarian.” He added, “Good luck controlling the Internet, tho.”
* Nick Searcy, actor: “Climate change has always existed, for millions and millions of years. Only in the last 100 years have evil communists claimed that they can control it in order to enslave the stupid idiots they can scare into believing them.”
* Glenn Greenwald, journalist: “This is the face of authoritarianism – even though it looks different than you were taught to expect. And it’s the mindset of tyrants everywhere: This is someone so inebriated by her sense of righteousness and superiority that she views dissent as an evil too dangerous to allow.”
* Ned Ryun, political commentator: “She’s an absolute authoritarian. In fact, evil.”
* Nick Palmisciano, Diesel Jack Media CEO: “Yes, please bring on the government disinformation service. What could possibly go wrong? It’s not like we ever see government officials abuse their power to their own ends.”

We’ve known for a very long time that our Prime Minister is a tyrant and evil, and now the rest of the world is waking up to the fact.

Ben Shapiro also made mention on his show which is the most listened to political podcast in the world, with 2.6 million listeners. 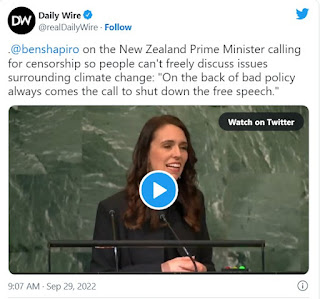 Even Senator Rand Paul has climbed into Ardern. He knows a fascist when he sees one: 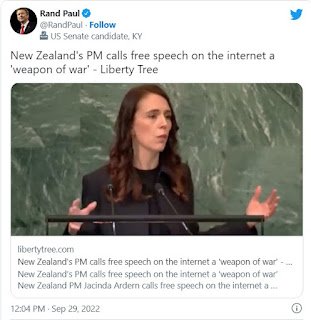 Tyranny has had a makeover. It’s no longer a boot stamping on a human face forever. It isn’t a gruff, gurning cop dragging you into a cell for thinking or expressing a ‘dangerous’ idea. It isn’t a priest strapping you to a breaking wheel. No, authoritarianism is well-dressed now. It’s polite. It has a broad smile and speaks in a soft voice. It is delivered not via a soldier’s boot to the cranium but with a caring liberal head-tilt. And its name is Jacinda Ardern.

New Zealand’s PM, every online liberal’s favourite world leader, has gone viral over the past 24 hours following the circulation of the shocking speech she gave at the UN last Friday. Before the assembled leaders of both the free world and the unfree world, Ms Ardern raised the alarm about a new ‘weapon of war’. It’s a ‘dangerous’ one, she said. It poses a grave ‘threat’ to humankind. It threatens to drag us headlong into ‘chaos’. We must act now, she pleaded with the powerful, so that we might disarm this weapon and ‘bring [the world] back to order’.

What is this terrible weapon, this menacing munition, that Ms Ardern so passionately wants to decommission? It’s freedom of speech.

And what has our New Zealand media said about all this coverage?
NZ media have almost ignored the extraordinary speech by Jacinda Ardern where she referred to the free and open internet as “a weapon of war”, and the fact that some people online deny climate change as a reason for governments to step in and regulate the internet.
The presstitutes in the NZ media often report breathlessly that the PM got some minor plaudit in a US newspaper, yet seem oblivious to or are deliberately ignoring the fact that millions of people are reacting with horror to her UN speech.

I guess that is what $55 million of bribes to the media gets you. The media sold themselves cheap. That 55 million pieces of silver seems to only buy either silence if the news is bad or propaganda.

Jacinda Ardern is a tyrant and now the whole world, except for NZ media, knows it. I’m glad people are finally realising what we have known for a long time, and at least since I wrote The Good, the Bad and the Ugly.

Oh, I do think the whole anti-vax thing is vastly overblown and I wish people would get over it.
BUT many thanks for telling what, as you say, the NZ media do not (the crawlers!) that Jacinda is seen for the despot she is, at the UN. Really miffed that we as a country have to share the opprobrium.

Absolutely, and now Willie Jackson is committing 100's of $M's of our money in the amalgamation of tvnz & rnz so that the Govt has even more control over what you see and hear. Even that devil, Putin would be impressed.

^ The “Anti-Vaxx” thing was not over blown, free speech in any forum is most important for Dissemination of alternate views, the so called “Ardernism” of “Disinformation or Misinformation” emanates from “The sole source of truth” enabled by a devious complicit (once respected) media, praise be the internet where new media groups are raising, little wonder Jacinda Stalin seeks to control it

The Vax thing was definitely not overblown, it's a crime against humanity