As a new ‘Great Game’ for control of the Pacific escalates, New Zealand’s foreign minister is coming under pressure from all sides.

For those keeping score, China has now signed co-operation agreements with Samoa and Kiribati, while the US has convinced Fiji to join its new Indo-Pacific Economic Framework for Prosperity (IPEF).

Most details of China’s new agreements have yet to be released, but they reportedly focus on economics and development – rather than hard security. But like the rather vague and weak IPEF on the Western side, the mere existence of the agreements is currently what counts.

As geopolitical competition and polarisation continue to deepen, timing and symbolism have been everything over the past week.
Last Monday, US President Joe Biden surprised observers with an apparent change in position in the US’s ‘strategic ambiguity’ policy towards Taiwan, when he said Washington was willing to intervene militarily to defend the island.

Then, on Tuesday – the same day as a Quad meeting was being held in Tokyo by Australia, India, Japan and the US – China formally announced an eight-country tour of the Pacific by its foreign minister, Wang Yi.

Wednesday saw the leaking to Reuters of a ‘China-Pacific Island Countries Common Development Vision’ – an ambitious blueprint from Beijing for multilateral co-operation in everything from policing and cybersecurity to climate change and trade.

A day later, on Thursday, Australia responded to China’s moves by dispatching its new foreign minister Penny Wong to Fiji – in advance of Wang Yi’s own trip to Suva. Wong had only just returned to Australia from the Quad meeting in Japan, which she attended together with new Labor Prime Minister Anthony Albanese.

In New Zealand, foreign minister Nanaia Mahuta was left to respond to the developments from the bigger players – and to fend off volleys of criticism from New Zealand’s former foreign ministers and diplomats over her perceived inaction.

Perhaps unsurprisingly, Winston Peters – Mahuta’s immediate predecessor as foreign minister – was one of the most scathing. On Friday, the New Zealand First party leader tweeted that ‘Mahuta’s incompetence has let this happen right under our noses’. The barb formed just one of many criticisms that Peters made throughout the week. 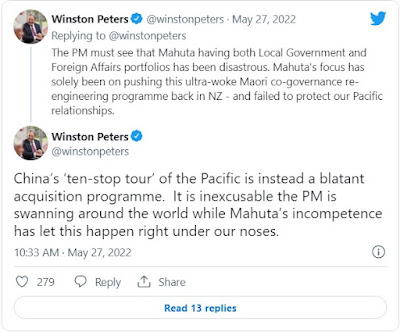 Meanwhile, Gerry Brownlee – like Peters, a former National Party foreign minister and a current political rival to Labour’s Nanaia Mahuta – said the minister should be visiting Pacific countries ‘in hot pursuit of the Chinese foreign minister’.

While defenders of Mahuta might write off criticism from Brownlee and Peters as standard partisan fare, the views of the former New Zealand diplomats are harder to ignore.

Marion Crawshaw, a former New Zealand diplomat with extensive Pacific experience gained in postings to Fiji, Solomon Islands and Papua New Guinea (PNG), tweeted: ‘Maintaining the ability to follow our own path in the Pacific has always required focus, attention & careful prioritisation. The need right now is for a visible lift to our attention & [relationships] right across the Pacific.’ 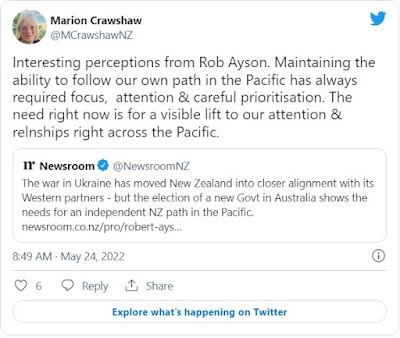 For her part, Suzannah Jessep, a former New Zealand Deputy High Commissioner to India now working for the Asia New Zealand Foundation, wrote: ‘Feels weird that the Chinese foreign minister is visiting the Solomon Islands, Kiribati, Samoa, Fiji, Tonga, Vanuatu, PNG, and East Timor, but NZ has hardly done any ministerial in-person diplomacy. Hard to argue that the Pacific is our priority.’ 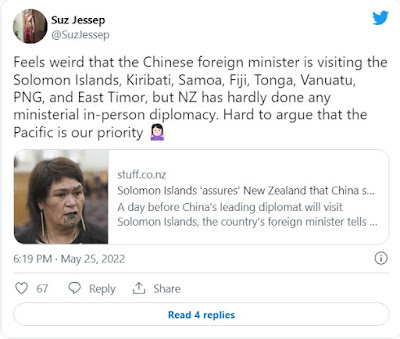 And another former senior New Zealand diplomat, Nicola Hill, tweeted that Jacinda Ardern was offering ‘word salad diplomacy on the global stage at a critical moment about China in the Pacific’ that was ‘incoherent’. Like Jessep, Hill also highlighted inconsistency in New Zealand’s face-to-face diplomacy: ‘How often does New Zealand’s MFA [Minister of Foreign Affairs] visit PNG, Solomon Islands, Vanuatu or Kiribati? A flurry of visits in 2019.’ 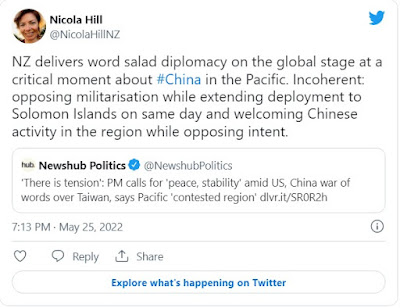 In a radio interview on Friday, Mahuta cited Covid-19 restrictions as the reason why she had not undertaken more travel in New Zealand’s neighbourhood.

The explanation holds for some countries, but not for others.

Kiribati, Samoa and Vanuatu are three examples of countries being wooed by China which are still generally closed to visitors because of Covid-19 border restrictions.

On the other hand, Papua New Guinea and the Cook Islands are very much open for business.

And while general entry restrictions are technically still in place for Solomon Islands, they did not stop Joe Biden’s Indo-Pacific Co-ordinator Kurt Campbell from leading a delegation to Honiara in April.

Indeed, given the pivotal role it has already played this year, Solomon Islands would seem like an essential destination for Mahuta to visit personally. Instead, the minister held a Zoom meeting with her Solomons counterpart on Wednesday, after it was reported that she had only sent a letter since it signed a security deal with China in April.

Mahuta has made only three trips outside New Zealand since she was appointed foreign minister in November 2020. Her inaugural trip last November to Australia, Asia, the Middle East and North America was followed by a Europe visit in February. Then, in late March, Mahuta made her only Pacific visit so far – to Fiji.

By contrast, trade minister Damien O’Connor is already on at least his fifth international trip.

As international travel gradually resumes following the lifting of Covid-19 restrictions, Mahuta is clearly passing up on travel opportunities.

More recently, last week’s high-profile World Economic Forum (WEF) in Davos would have been an ideal networking opportunity for Mahuta to meet top global political and business leaders. Ardern’s current trip to the US meant that she could not attend the WEF herself – but she did attend in 2019.

One likely explanation for the relative lack of travel by Mahuta is her hefty domestic ministerial portfolio – Local Government – in which she is attempting to introduce major reform. Legislation for the ‘Three Waters’ plans is expected to be introduced to Parliament from the middle of this year, which will demand even more of Mahuta’s time.

It is true that previous foreign ministers – including Winston Peters – have frequently held extensive additional responsibilities in the past and have seemed to cope with their duties.

But as last week showed, geopolitical developments are speeding up.

If workload is the problem for Mahuta, the issue needs to be urgently addressed by Jacinda Ardern. This is especially true because the diplomatic travel schedule is typically heavily weighted towards the second half of the year, when annual meetings are traditionally held for multilateral groupings such as APEC, the ASEAN Regional Forum, the East Asia Summit and the Pacific Islands Forum.

Given the current geopolitical tensions, but also because most gatherings could only be held in virtual form in 2020 and 2021, New Zealand’s in-person participation at all of these summits – and more – is highly desirable.

To be fair, Mahuta’s difficulties are partly structural in nature. New Zealand currently has too many ministers tending to the foreign policy broth.

New Zealand has no fewer than eight MPs (including ministers, an associate minister and an under-secretary) who hold responsibilities that relate to foreign affairs – not including the Prime Minister.

In particular, the separation of trade from the main foreign affairs portfolio is increasingly becoming an anachronism.

New Zealand split off the role from the main foreign affairs job in 1996.

The approach worked well during the post-Cold War era of technocracy that focused on expanding free trade under the then new World Trade Organisation (WTO) and establishing bilateral free trade agreements.

But with trade now often serving as a bargaining chip in the bigger geopolitical game – as China’s new draft agreement with Pacific nations and the US-led IPEF demonstrate – the division is now largely an artificial one and makes little sense.

A dedicated, full-time New Zealand Minister of Foreign Affairs and Trade would be far more effective – and more powerful.

Today’s new rivalry in the Pacific is very different from the original colonial Great Game, which pitted the British and Russian empires against each other in a quest for control of Afghanistan and Central Asia in the late 19th and early 20th centuries.

In the Great Game of the 21st century, face-to-face diplomacy is perhaps the single most valuable tool – as Australia’s Penny Wong and China’s Wang Yi successfully demonstrated over the past week.

New Zealand needs to ensure it can withstand the heat.
Geoffrey Miller is the Democracy Project’s international analyst and writes on current New Zealand foreign policy and related geopolitical issues. He has lived in Germany and the Middle East and is a learner of Arabic and Russian. This article was first published HERE

Mahuta is so focused on getting control of Kiwiland that these other issues don't seem to be on her radar.

Having Mahuta as Foreign Minister - clearly out of her depth - is an indictment of the Prime Minister. NZ needs someone who can walk and talk.

Minister Mahuta is visibly missing in action at one of the most crucial, pivotal time lines in modern history. We see China making rapid entry and agreements across many Pacific nations, closing out partnerships with New Zealand and other close neighbours/allies. We see Russia invading and demolishing Ukraine, Globally the potential for large scale upheaval and take overs have never been more concerning and possible, yet our Foreign Minister is missing in action?
Come now, in what other company would such a lack of transparency and input at such a high level of management be tolerated?
Minister Mahuta must be held accountable for her gross mishandling of these major global problems. She must answer as to where she has been, and why she had been caught asleep at the wheel.
We as a nation deserve better.