A number of critically important questions have been raised in recent discussions I have had with farmers about their greenhouse gas emissions. They deserve answers. The mainstream media ignore them preferring to bag the farming community saying they are getting off lightly and are not meeting their responsibilities.

Question 1. Why is Article 2 (b) of the Paris Agreement ignored when it states clearly that countries should not reduce food production in their pursuit of emission goals? Proposals that will reduce production by 15% or more violate the Agreement.
Question 2. Why are we taking unilateral action that will cut production in NZ that has the planet’s lowest carbon footprint when we know that other countries, with a worse record, will make up the shortfall leading to increased emissions overall?

Question 3. Why is 1990 used as a base date for measuring ruminant emissions when methane emissions only last 9 to 10 years in the atmosphere? Isn’t that deceptive? The Climate Change Commission showed clearly ruminant methane emissions are stable or falling slightly since 2005 which means farmers have achieved ‘net zero’ and are actually contributing to cooling the planet. The amount of methane from the farm in the atmosphere is falling. Farmers are heroes not villains. 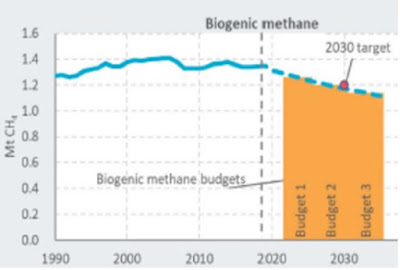 Source
Did I read it wrongly when the Climate Commission said if ruminant methane emissions are stable, as they are now in NZ, then no new warming is occurring? The only reason the Commission could muster up to tax farmers seems to emerge from their inability to find a way to reduce fossil fuel CO2.

Question 4. How come we can afford to subsidise huge, wealthy offshore corporations to plant trees to suck up CO2 and in the same breath tax farmers who suck up methane to grow grass? Isn’t that hypocritical? Farmers sequester CO2 into the soil, in meat and milk and a small percentage gets burped back into the air. They are doing us all a favour and we penalise them. It's that natural CO2 cycle we learnt in college where photosynthesis uses CO2 to grow plants and grass.

Question 5. Why do many scientists, the green lobbyists, the media and politicians focus on gas concentration, volumes of greenhouse gas and molecule strength and not on warming? Isn’t it warming of temperatures that is supposed to be the problem? Telling us that a methane molecule is 32 times more potent than a CO2 molecule tells us nothing about warming. For starters it overlooks the fact that there are very few of those molecules in the atmosphere anyway. On any one typical day over New Zealand H2O molecules, the overlooked greenhouse gas, out-number ruminant methane molecules 60,000/70,000 to one.

Omitting recent falling trends in ruminant methane and failing to admit its short 10 year life makes it look suspiciously like a con job. And my farming friends tell me many of their leaders have fallen into the trap of going along with the politics, ignoring the science.

Question 6. Why have recent science findings been ignored. Science is never ‘settled’. It evolves. New work shows that methane is a poor absorber of radiation on the electromagnetic spectrum. Methane has narrow absorption peaks in the 7 to 8 micron range, its only relevant bands. At the other minor absorption peaks for methane there is very little energy emitted by earth into that spectral region. This work by Wijngaarden and Happer has not been challenged or refuted. It downgrades methane as a greenhouse gas and as ruminant methane is only 14 – 15% of all methane it means we are wasting time and resources chasing farmers for something that is not a real problem.

Question 7. Do we really want the truth as a nation, as a community, as individuals or are we just playing political games willing to throw farmers under the bus to be the first, the biggest and brightest of the world’s climate warriors?

Why can’t we have a sensible discussion to get to the truth? Why won't the media help us find the reality? Why are we not, New Zealanders first and foremost, defending ourselves, supporting our farmers who bankroll the economy rather than blindly rushing to bag them?

Owen Jennings, a former Member of Parliament and President of Federated Farmers, maintains a keen interest in ensuring agricultural policies are sensible and fit for purpose. This article was first published HERE

There is only one "truth" as far as our government, mainstream academia and the media are concerned when it comes to climate change. The bilge that is trotted out by the UNIPCC in its executive summary. That's the only part that these people read because it is a dumbed down series of scare stories and they don't have the intelligence, concentration span or understanding to go any further.
Invariably, the apocalyptic executive summary claims are not backed up or in some cases even contradicted in the body of the report.

A global crisis has been manufactured out of nothing when the facts are sitting in the same report. That's how corrupt, gullible and just plain stupid this generation of politicians are. And NZ has one of the worst useful idiots going - Jacinda Ardern.

the whole 'climate change' agenda is driven by the fascination toward 'one-world' government. it is important for countries to challenge that premise as the first step. we might be linked by trade, tourism, charity, migration, etc. but governance is what distinguishes one country from another (even places as similar as sweden and norway).

Why is our dear leader hitting Kiwis with carbon taxes and using some of this money to subsidize the purchase of electric cars made in China where they are increasing Co2 emissions? NZ's annual emissions are 2% of China's annual Increase. Swimming against the tide yes, futile yes, destructive to our economy and standard of living yes. The only one's to benefit are her and her lapdog, James Shaw, when they can go into some climate conference and boast about what measures they taking, self agrandisement, failing to mention the costs.

Well said Owen. In addition to your absolutely correct comments, there is no proof that CO2 causes climate change. The doom merchants can only claim computer modelling and we all know how inaccurate they have proven to be!!!!

What you say does have a lot of truth but intensive farming of dairy and beef cows is not good for the environment and not the future answer to efficient feeding of the population. Using fertilizer on paddocks to grow more grass in order to have more cows is a bad economic decision for the country.

Nowhere do I see the media admitting that 85% or more of the total greenhouse gas is water vapour, over which we have no control. The media would have us believe that a tiny component of the atmospheric (methane) is going to make a dent in that. In fact only a massive reduction in carbon dioxide production is going to have an impact whatsoever. Since this is unlikely what are we trying to prove by penalising the main contributor to our overseas earnings? It simply makes no sense.

Truth has nothing to do with reality when Marxist, Globalist politicians are involved. Owen makes many good points, & partially explains the natural cycle of CO2, from animal back to pasture. Yet our children & much of the population have been brainwashed to believe the world needs saving, & only obeying these Marxist politicians can save it. No more than a CUNNING plan to retain power, & ensure we remain obedient servants. The truth is out there if you are prepared to investigate the REAL science. Sadly, a large proportion of the population still believe the government controlled M.S.M, so thanks to their ignorance, the lies will continue, & the great reset will be implemented.

Question 8. What would happen if all the NZ farmers collectively refused to pay any taxes for 12 months?
Question 9. What are the greenies doing to have human population growth reduced and reversed?

OK, so we are planting a lot of trees to soak up CO2. Then we are out to reduce the production of CO2. When CO2 levels fall to the point where there is not enough for the trees to feed (remember the photosynthesis cycle from high school ?) what is going to happen ?
I have to admit to not remembering the minimum concentration of atmospheric CO2 to sustain plant growth, however I recall it is quite high. Perhaps some Professor of Botany can remind me.
Recalling that the by-product of photosynthesis (after the production of carbohydrate) is oxygen, CO2 becomes a necessary feed-stock to keeping us mere mortals alive.