Roger Childs: Getting the History Right: Confiscated Land: The media’s need to tell the truth about our past

Historians do not dispute that the fact that Treaty of Waitangi (Te Tiriti o Waitangi) was signed in 1840, however, opinions differ over the significance of the Treaty and how it should be recognized today. It is accepted that mainstream media will publish opinions about our past, but it is incumbent upon them to tell the truth on the indisputable realities of what happened. 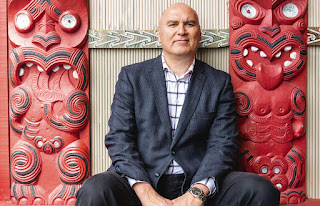 Last week I wrote a letter to the editor about a comment made by Ngati Toa CEO Helmut Modlik (pictured) which featured in a recent Dominion Post front page article. (See the text below.) One of the oft repeated lies about our history which many historians and Maori activists promote, supported by the media, is about land confiscated by the colonial government in the late nineteenth century. The word “stolen” is often used on this issue. Ngati Toa had lived in the Kawhia area before migrating to Kapiti. Their lands on the west coast of the Waikato were confiscated by other tribes, but no land was stolen from the tribe in Kapiti.

Maipi gets it wrong in Hamilton

Unfortunately, mainstream media (MSM) seem to adopt the attitude that if a tribal leader says something about our history it must be right. Readers will recall that during the “Black Lives Matter” crusade in 2020 statues were being pulled down overseas of people ranging from slave traders to Confederate generals.

A mischief-making kaumatua, Taitimu Maipi, wanted the statue of Captain Hamilton removed from a square in the city that bears his name. He described Hamilton as a murderous a*$*hole but provided no evidence to support his opinion. The facts of the matter are that Captain John Hamilton was a naval officer who arrived on a ship at Tauranga in April 1864 and a day or two after he landed he was killed in the Battle of Gate Pa. MSM didn’t bother to check the facts.

This letter was sent to the editor of the Dominion Post, but she didn’t want to know.
Getting the history right

In the Dom Post article (Tuesday May 10) on Ngati Toa’s recent land purchase it was claimed that there was “… illegal confiscation of the iwi’s land”. Not so. Te Rauparaha did confiscate a great deal of land from other iwi in the inter-tribal wars before 1840, but the only confiscations by the colonial government were in Taranaki, Tauranga, Bay of Plenty and the Waikato in the 1860s. This was only a small proportion of the total Maori land in the country and most was later returned or legally purchased. There is no debate among historians about these facts.

It is an important role of the media to provide accurate information about the country’s history so that there is no misunderstanding about what actually happened.
Roger Childs is a writer and freelance journalist. He is a former history and geography teacher, who wrote or co-authored 10 school textbooks. This article was first published HERE