… 49 of these ancestors were collected by Austrian taxidermist and grave-robber Andreas Reischek who spent 12 years in New Zealand from 1877 to 1889. – Piers Fuller, Dominion Post, Monday, October 3

Reischek is in the news because the ancestral remains of Moriori and Maori he collected were repatriated on Sunday from Austria. He came to New Zealand for a couple of years to help out with setting up the Canterbury Museum. But he stayed for twelve. 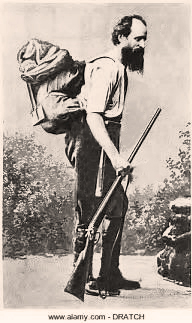 With his dog Caesar, a pack and a gun he traversed the country, exploring and tramping through inland Canterbury, Northland, the Waikato, King Country, Volcanic Plateau, the West Coast, Fiordland, Nelson and the Bay of Plenty. He also visited all the sub-Antarctic islands south of mainland New Zealand.

His autobiography — Yesterdays in Maoriland — which came out in 1930, over 40 years after he had returned to his homeland, is a fascinating record of his travels, interaction with Maori, and observations on native flora, fauna, New Zealand history and Maori customs. 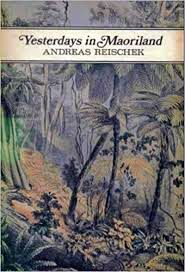 On the ship coming out to New Zealand in 1877, Reischek lived through a smallpox epidemic, just one of many challenges he would face. During his adventures up and down the country he would come through slipping down cliffs, enduring snow storms, crossing flooded rivers, being knocked down by a falling tree, accidently poisoning himself and being tipped out of a boat.

He mainly lived off the land, and the combination of his gun and the amazing retrieval skills of Caesar, allowed him to survive in very difficult conditions. Although he sometimes had human company, he was generally on his own and one winter spent several months alone in the remote sounds of Fiordland.

His resilience and adaptability were amazing. Back in “civilisation” he spend plenty of time in helping set up museums in Christchurch, W’anganui and Auckland, as well as private collections, however his innate curiosity about New Zealand birds and vegetation impelled him to regularly head out into back country.

Once in the remote areas he showed amazing fitness, navigational skills and seldom got lost. He scaled a number of peaks and climbed Mt Ruapehu after tramping north from W’anganui!

English and Maori alike esteemed Reischek as a man and a pioneer of the true breed and he spoke lovingly of the colony to the very day of his death. –H.E.L. Priday

Reischek was fluent in both English and Te Reo, and the latter knowledge enabled him to readily mix with tribes up and down the country.

Maori in villages and white settlers on remote farms were always happy to welcome and support the traveller, and Reischek was very grateful for any hospitality he received.

He became the friend of Maori “king” Tawhiao, and was the only white person free to travel through the king’s domains.

Andreas Reischek provides his version of New Zealand history and given his perspective from the late 19th century. His detailed comments on Maori history, lifestyle and traditions are from unique first-hand experience.

However, some of his explanations are not accepted by the Wokeist historical establishment. Like some other travellers, missionaries and scientists he reiterates the view that Maori found people living here when they arrived.

The chiefs told me the Maori are a mixed race … They landed at different spots in the North Island and found them inhabited by dark coloured men with curly black hair and short of stature … So the Maori conquered them, killed the men and took possession of the women. This union would account for the three differentiated types I noticed.

There is no reason why Reischek should have sought to deceive his readers about the possibility of earlier inhabitants or about the love of some Maori for human flesh. He had great respect for Maori culture and told it as he saw and heard it. 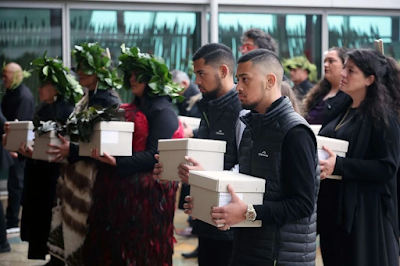 Ceremony for the return of remains from Austria last week.

Reischek has come in for criticism in the 21st century because he did send human remains, as well as plant and bird specimens, back to Europe. However, in the late 19th century this was not uncommon and when the book came out in 1930, these actions by the Austrian collector did not receive adverse comment.

Maori chiefs back in the 1820s and 1830s traded smoked tattooed heads for muskets and these later appeared in museums and collections all around the world.

Historian Michael King called him The Collector, but he was much more than that. Andreas Reischek remains one of New Zealand’s great 19th century travelers and observers. Back in the 1880s he expressed very modern views about respect for Maori culture, concern over European settlers devastating the environment and the problem of the threat of rats to the local birdlife. 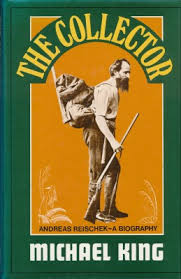 Yesterdays in Maoriland is one of the most interesting books on late 19th century travels in New Zealand, and if you haven’t read it, try to track it down through your local library.
Roger Childs is a writer and freelance journalist. He is a former history and geography teacher, who wrote or co-authored 10 school textbooks. This article was first published HERE

Wow sounds like a very interesting read Love the article

Thanks Roger. I have the book coming over from the Porirua Library. Excellent library service we have.

Very interesting...
This confirms that Maori are NOT "indigenous", which we already knew, because they trace their origins as settlers here from Hawaiki, and trace their DNA to Taiwanese tribes.
But this eye-witness account, from a very highly respected source, makes it clear that Maori were not the first settlers in New Zealand.
This is not to disrespect them in any way, but just to clarify that, in our nation here, we are all recent arrivals, and unity of all of us immigrants is the most important societal aspiration.

Reischek was funded by Lionel Rothchild, Reischeks NZ bird collections were displayed at the Rothchild Museum, at that time the worlds largest Natural Hstory collection, Rothchilds collection is now at the Natural History museum of London..Lionel Walter Rothschild (1868–1937) amassed the greatest private natural history collection ever put together by one person and housed it in his own museum in Tring, in Hertfordshire, England. Built in 1889, the museum first opened to the public in 1892.

Well done Roger. You have exposed yet another example of the confused thinking that follows making 21st Century value judgements of 19th Century activities.
This creates a fertile field exploited by the purveyors of fake history with their agenda of twisting lies about the Treaty to suit their political purposes. Sadly the media is in the hands of these people and the NZ public is becoming less and less aware of how they are being manipulated.

Yes, that's a great article. I have always believed that Maori are wrong calling themselves 'indigenous' as they were not the original inhabitants of New Zealand.
The problem they have, and that they don't seem to want to address is how do the Moriori fit in to the equation of habitation of New Zealand. When they do then it certainly confirms that they, the Maori, are NOT the indigenous people of New Zealand and they should stop using that title. To do so is a fraud!
Frankly for me they are no more than immigrants to New Zealand than the rest of us , They , the Maori, only arrived about 600 years earlier and they were lucky the European immigrants were a heap more sophisticated than they were in that they didn't kill all the male Maori off and keep the females for slaves when they hit the shores of New Zealand.

Yes I had heard that when the Maori found the value of trading the shrunken heads they would raid a village. Capture a few of them and hold them prisoner so they could tattoo them up. Once the tattoos had healed they were dispatched and the head shrunken so it could be sold or traded.

Indigenous means 'originating or occurring naturally in a particular place'. Through evolution a race or a species over time would become so distinct from their ancestral settlers that they could be categorized as a new race or species. A new species is defined as one that cannot breed with the ancestral species, but for race the criterion is not so stringent. Maori were so not indigenous that by the time Captain Cook visited, even their language was still so similar to that of their Polynesian cousins that Cook's interpreter Tupaia from the Society Islands was able to converse with them even though he had never been to New Zealand. Indigeneity is not related to whether some other group was there previously but regardless, calling Maori 'indigenous' is false.