Cam Slater: FFS! Why Don’t You Take Some Responsibility, for Once?

This Goverment has a terrible trait of never taking responsibility for their own policies and actions. They always seek to blame others for their numerous failings. Remember Ardern chucking a KFC worker under the bus, also Americold for various Covid outbreaks? Then there were the three women they defamed and attacked for travelling to Northland from Auckland. It’s never their fault, always someone else’s. We also mustn’t forget the constant refrain of “nine years of neglect” that they still regularly trot out.

Yesterday in Parliament Chris Hipkins shamelessly tried to blame the Sandringham dairy worker’s death – at the hands of a knife-wielding criminal – on the National Party. 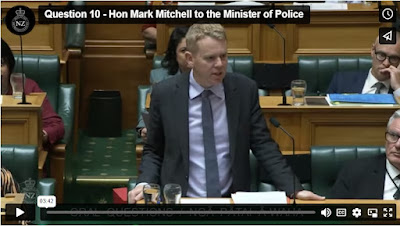 Hon Mark Mitchell: Did the Minister sign off and approve the criteria that allows business owners to have access to the retail crime fund?

Hon CHRIS HIPKINS: The criteria for that was approved before I became the Minister.

Hon Mark Mitchell: What is the criteria?

Hon CHRIS HIPKINS: There are a range of criteria – past victimisation being one of the key criteria. But it will also look at what the most appropriate security intervention is for that particular business. It’ll also look at the overall nature of offending within the community. It will look at a range of different issues.

Hon Mark Mitchell: So the Minister’s standing in the House and can’t tell us definitively what the criteria is for a fund that he’s been overseeing for the last six months and the business in Sandringham had applied for, including the request for a fog cannon that actually would have gone probably a long way towards preventing the tragedy that we saw unfold in Sandringham last night?

Hon CHRIS HIPKINS: As I indicated in my answer to another member’s question earlier, on the information that I have, the business should have been eligible to receive a fog cannon from as early as 2017, when funding was made available by Government for the installation of fog cannons at that time, and therefore I do not yet have an explanation as to why they have not received one.

So, Chris Hipkins seeks to blame National for the lack of approval for the fog cannon to the dairy owner in Sandringham. It’s never their fault.

When did the National party announce funding for fog cannons? It was June 2017 so it can hardly be their fault when an election was only a couple of months away.

Just a few months after winning the 2017 election, Labour was declaring that fund to be insufficient and announced a better funding mechanism for at risk businesses in February 2018.

The previous government announced in June 2017 that $1.8 million would be set aside for the installation of devices like audible alarms, fog cannons, and DNA spray in premises identified by Police as high risk. However financial barriers deterred many business owners from taking up the assistance, and by November 2017 the equipment had been installed in just three locations, two in Auckland and one in Wellington.

“I was concerned to learn that many shop owners declined to take part in the scheme because the costs were prohibitive,” says Mr Nash.

“The previous scheme required businesses to contribute 50 per cent of the cost but that was beyond the reach of many. A fog cannon can cost around $4,000, while a DNA spray system can be more than $3,000 and an audible alarm can be around $1700.

“I have reviewed the way this fund is allocated and decided that greater financial support is needed to make this a viable option for the most at-risk business owners. Many of these businesses, such as dairies and superettes, have only very small profit margins and were facing a potential bill of several thousand dollars for these crime prevention tools.

“The government has increased the subsidy so at-risk business owners will contribute no more than $250 towards the cost of a fog cannon. This is a fraction of the bill they faced previously. I encourage all eligible shop owners to take advantage of the changes to this scheme. Already a further 17 stores have installed the fog cannons during December and January, while eight more are awaiting fit-out.

But this business was declined funding. Further, despite dozens of headlines claiming that hundreds of these devices would soon be installed nationwide, this useless Government and their handmaidens in the equally useless Police have managed just six installations in the latest tranche of funding for these devices, since August 2022.

Police have ploughed literally hundreds of millions of dollars into policing, persecuting and making life increasingly difficult for licenced firearms owners. At the same time they’ve failed to police actual criminals. This Government has emptied the prisons, the Police stopped chasing criminals, and now the politicians are baffled as to why crime is rampant, particularly in Auckland.

Their intransigence on the realities of the burgeoning crime tsunami overwhelming our towns and cities has now cost someone their life.

Sunny Kaushal is right: this Government and the Police have blood on their hands.

A statement from Kaushal expressed his dissatisfaction with Government’s action on crime policies, calling the country “lawless”.

He said the death of the dairy worker was “inevitable and sadly predictable”.

“We warned someone would be seriously injured or killed. Yet we only get radio silence from a Government that has our blood on their hands.”

Kaushal spoke specifically about Prime Minister Ardern, claiming the group never received a single reply despite asking her to meet.

When asked about this on Thursday, Ardern told the media that the Minister of Police had met with Kaushal three weeks ago.

She also mentioned there was “grave concern” regarding aggravated robberies, she rejected the notion she was soft on crime.

Just like Chris Hipkins, Ardern simply seeks to apportion blame elsewhere. But it is apparent to everyone, including Blind Freddy, that this Labour Government is responsible. They can’t blame National.

This tragedy is just another example where announcements are just that: announcements. There is never any delivery, and in this case, it has cost the life of an innocent man.

Time for a change.

What is DNA spray? Some sort of gun which left a trail of blood for DNA analysisi would seem likley useful.
I suspect the criminals are simply acting out "imagining decolonisation" as many have been and are repeatedly exhorted to do. Plunder raids were very much part of pre colonial culture. At least they are running off with only bottles for consumption.