Cam Slater: Now We Get To See Who’s Been Swimming with No Undies On

Yesterday the Reserve Bank Governor, Adrian Orr, shattered Kiwis’ Christmas dreams delivering a massive 75 basis point jump in the OCR, to 4.25 per cent. That is the highest rate since 2008. The news is bleak:

The Reserve Bank has delivered a jumbo-sized interest rate rise of 75 basis points and considered a full percentage point as it forecast a recession was likely in its battle to combat inflation.

The Official Cash Rate (OCR) was lifted to 4.25 percent, the highest level since December 2008, the biggest single rise since the OCR was established in 1999 and the ninth consecutive rise.

The rise had been expected as the central bank continued to combat 32-year high inflation, but the monetary policy committee looked at all options between 50 basis points and 1 percentage point rise.

“The committee agreed that the OCR needs to reach a higher level, and sooner than previously indicated, to ensure inflation returns to within its target range over the medium-term.

“On the balance of risks, the committee agreed that a 75 basis point increase was appropriate at this meeting.

“Core consumer price inflation is too high, employment is beyond its maximum sustainable level, and near-term inflation expectations have risen,” it said.

The final statement mirrored previous decisions this year highlighting the strength of the economy, the jobs market, household spending, and the need for “resolute” action to control high core inflation.

“Committee members agreed that monetary conditions needed to continue to tighten further, so as to be confident there is sufficient restraint on spending to bring inflation back within its 1-3 percent per annum target range.”

Projections accompanying the statement had the cash rate rising to 5.5 percent by September next year and no hint of a cut before late 2024.

Among economic forecasts were four quarters of economic contraction – a year-long recession – starting in the middle of next year.

The Reserve Bank says we are heading for a hard recession, biting before the next election. What happens immediately, though, is interest rates soar, people and businesses on the margins of their banking covenants are going to get a talking to from their bankers, and mortgage holders are going to get squeezed even more for money that simply isn’t there.

As the saying goes, the tide’s gone out and we are all about to find out who’s been swimming with no togs on.

All Grant Robertson has to say about it all is that we are better off than other countries, rather pointedly ignoring the fact that we live here and not in other countries. 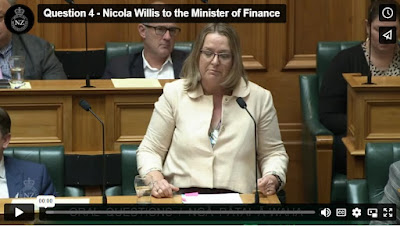 Nicola Willis: What does the Minister take more seriously: name-calling his political opponents, or the fact that the Reserve Bank has just forecast that New Zealand will go into negative growth next year and stay there for four quarters, spelling a deepening of the cost of living crisis for every single New Zealander?

Hon GRANT ROBERTSON: I take seriously the fact that New Zealand, as an open trading economy, will always suffer the impact of what happens around the world. I take seriously supporting New Zealanders through that, to make sure that those who are the most affected—on low and middle incomes—get support; not those who are on the highest incomes. As I have said in this House many, many times, 2023 will be a difficult and challenging year for New Zealand. Our starting point is better than most other countries: New Zealanders are in work while facing these issues; New Zealanders are seeing their average hourly earnings rise ahead of inflation. This will be a challenging time – as it happens, the Reserve Bank are forecasting that growth in the last two quarters of this year will be very, very strong, and yes, there will be a period where it comes off from there, but New Zealand, overall, remains resilient and strong in the face of this.

And Robertson ignores the impact of his own profligate spending habits.

Nicola Willis: Does the Minister understand that non-tradeable domestic inflation here in New Zealand is currently the highest it has been since records began, and that this measure is something he can’t blame on Vladimir Putin?

Hon GRANT ROBERTSON: As we’ve discussed numerous times in the House, non-tradeable inflation is not a direct corollary with domestic inflation. I’ve already worked the member through the issues around the construction sector and the imported inflation that occurs in what is something that is largely seen as a non-tradeable item. What I do acknowledge is that we are now in a period of time where inflation is much higher than we have experienced in recent years; it is an issue that all New Zealanders will feel the consequences of. What I would say is that a responsible Government strikes a balance between making sure that we do the things we can to reduce that, but also to continue to support the low and middle income New Zealanders most affected by it – that is not the member’s policy.

It beggars belief that Grant Robertson has such a tenuous grip on reality; again telling Kiwi voters that they should be grateful that they live here because it would be worse overseas.

Nicola Willis: Is the Minister aware that, unlike in many of the countries he likes to compare New Zealand with, the Reserve Bank is forecasting that inflation is yet to peak here at home, and will hit 7.5 percent in the coming months – right at the same time as New Zealanders will be paying record mortgage payments, and when will that Minister present a plan to address it?

Hon GRANT ROBERTSON: Those countries around the world that we seek to compare ourselves to have inflation – in the case of the UK, up over 10 percent. They’ve had inflation in the case of Australia, likely to reach at 8 percent by the end of the year. We continue to find ourselves in a position where we have the tenth lowest inflation out of 38 countries in the OECD. The cost of living pressures that we see are strong. Now, the member might like to think about the fact that actually, the actions that the Government has taken – for example, reducing the fuel excise duty and having half-price public transport, have contributed to lowering the Consumers Price Index.

That’s all cold comfort for borrowers, who have just had a massive and alarming haircut. Banks and brokers will be having to recalculate debt servicing ratios and debt-to-income ratios along with the mortgage serviceability test rate.

Mortgage serviceability test rates were 5.8% in June 2021. Before yesterday’s rate increase, bank stress test rates were 8.15%, and now they are likely to exceed 9%. That is going to put a massive squeeze on the availability of finance, and move to constrain cash flow as well.

All Grant Robertson can offer is abuse and ridicule as his policies start to really harm Kiwi families.

We need an end to this Government and it can’t happen soon enough. Sadly, the next election is still a year away.

The control of the economy by printing money and fiddling interest rates seems absurdly crude. It is described in any introductory economics textbook yet we pay huge staff on huge salaries to pronounce. Jacinda should put on her pleading Chch face and ask the public to accept established wage rates. The effective never downward indexing of wages to CPI, of one occupation to another, women to men, is guaranteed to create obdurate inflation. Many are lucratively paid to further this nonsence.
We seem unable to decide if we are a free market capitalist society or not. We seem to adopt the worst of both worlds. Free market to send prices and costs up and regulation to ratchet, widen and hold there. Ethics no longer feature; just vote caoture and retention. The constant immoral robbery of savers is completely accepted. They are forever punished for their anti social activity. They should all be blowing their money on frivolous cruises. Why save when it can be printed?