Cam Slater: How Did We Get from Never Telling Lies to Lying Constantly?

Remember the 2017 election when Patrick Gower asked, “Is it possible to survive in politics without lying?” Jacinda Ardern put on a huge, sincere, toothy grin and announced, “I believe that it is possible to exist in politics without lying and by telling the truth,” and went on to assure Gower that she’d “never told a lie in politics”. Which, of course, was a big fat lie. The problem is that Ardern almost certainly believes that bull dust.
The problem for us all is she has actually never stopped lying and has not even started to admit that she does. Such is life as a narcissist, steadfast in their belief that they are never wrong. The nastiest lie was that vaccines were “safe and effective” along with if you are vaccinated “you won’t get sick, and you won’t die”. 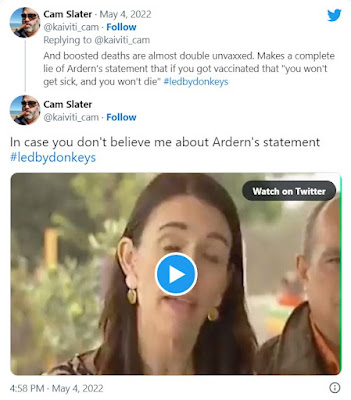 Then on Monday night she flat-out lied to Heather du Plessis Allan about the status of fog cannons. Kate Hawkesby explains, rather brutally:

The PM’s post-cabinet chat yesterday was stomach churning in so many ways.

The lies, the disingenuousness of it all, the theatrics and the pretence that they’ve actually been active as a government on crime. Embarrassing. No one’s buying it.

This new fog canon [sic] measure is too late – they know it, we know it.

Worse yet, the PM tried to deflect all blame from her Government by saying that there’d be a delay on said fog cannons – due to a global shortage. This turns out to be an outright lie.

Newstalk ZB Drive host Heather du Plessis Allan smelt a rat straight away and last night called a fog cannon supplier to fact check the PM on this one. No surprises in his response.. he said to her, ‘I see the Queen of Spin is at it again..’

He said the facts are, there is no global shortage of fog cannons, the supply issue is due to the Government not placing any orders for them. They’ve dropped the ball, again.

He said they’ve been waiting months for the government to place fog canon [sic] orders and they’ve just been sitting on their hands. He said it takes about 3 months to make a fog canon, then you’ve got to ship them to New Zealand, and given the Government’s placed no orders, that’s the delay.

So the delay is the Government’s fault, it’s on them. Remind anyone of the vaccine rollout?

Jacinda Ardern lied, and now someone has died.

Patrick Gower needs to ask the Prime Minister again if it is possible “to survive in politics without lying?” just so we can see her lying lips move with still more lies.

Then he should ask her if the stabber was out on parole after a previous violent attack on a store, and whether or not Police opposed bail. I know the answer, but will the Prime Minister answer it truthfully and will the Police Minister?

The PM has a credibility problem. Included in her post Cab was the other audacious claim that they’ve been tough on crime.

I can tell you this for nothing, rejecting this stuff doesn’t make it go away. It is a crisis for every single victim and every family member of victims in these burglaries and raids.

But the other real crisis we’re in at the moment is a spin crisis. There’s too much of it coming from the Pulpit of Truth.

We’re drowning in it; we’re exhausted from being fed it. I do worry about all those who just accept it without question though, or have checked out because they don’t even care anymore.

We should care; we are being fed a steady diet of BS, from a government that has no idea what the words accountability or responsibility mean.

Frankly, I’m surprised her nose hasn’t grown prodigiously given the amount of lying she does.

Patrick Gower and all those other journalists should be challenging all those lies. The biggest, smiliest, frowniest liar should not be getting away with it! And all the other MP's are just as bad, tarred with the same brush.
MC

So very sad for our country

I think we should all recognise that Ms Ardern has checked out . She looks tired , acts tired , is tired . Labour let her go , rest and move on .