Cam Slater: Oh Chippy, What Have You Done?

Education Minister Chris Hipkins says it is an “absolutely legitimate message” to tell parents to prioritise getting their kids to school.

It comes less than a day after National leader Christopher Luxon received a blasting from the Prime Minister for saying to parents, “you chose to have these kids, you have to wake up at 7am, get your kids to school at 8am”, in the wake of poor school attendance data.

Jacinda Ardern said on Monday she didn’t agree with Luxon’s comments and described them as a “simple view of the world”. She said people do need to take responsibility “but just making an argument that that is the solution to every issue that we currently face won’t fix the issues”.

Uh oh, Chippy goes off script – pretty sure Jacinda said that suggestion was a simple view of the world. Why, yes she did:

But Ardern doesn’t agree and believes National has a “simple view of the world”.

She’s laying Luxon’s comments – past and present – at his feet.

So it looks like Jacinda Ardern thinks her Education Minister also has a simple view of the world.

What would she know about parenting anyway, between the nanny and her parents I’d suggest she has no idea. Most Kiwis have neither to fall back on.

The bottom line is that parents are the ONLY people responsible for whether or not their children go to school. No one else. School is compulsory, but this lackadaisical government couldn’t possibly be seen to be enforcing rules, now could they?

Meanwhile the functional idiot masquerading as Prime Minister is not focussed on getting kids to school: instead she is focussing on giving 16 year olds the vote.

Perhaps they could tie voting to school attendance? 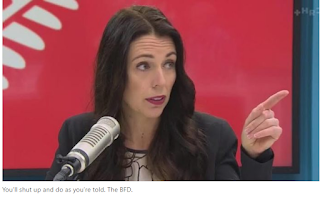