Lindsay Mitchell: Am I the only person who reads MSD's annual reports?

Am I the only person who has read MSD's latest annual report?

It's a tedious business but surely a few checkers cast their eyes over it prior to publication.

I was casting my own over the benefit statistics by region when I stopped in my tracks. 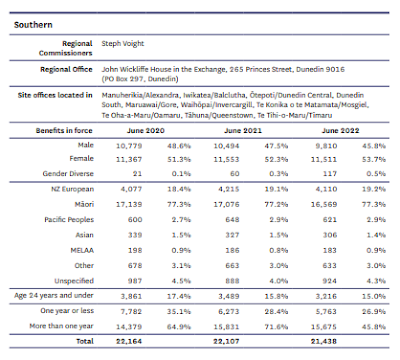 According to the above table 77.3% of people on benefits in June 2022 in the Southern region (which encompasses Dunedin, Central Otago and Invercargill) were Māori.

I checked the other two South Island regions - Canterbury and Nelson-Marlborough-West Coast - to find similar proportions at respectively 71.2 and 77.7 %

This is astounding news to me. Māori make up 17 percent of the population nationally but lower percentages in the South Island. For instance, at the last census only 9.4% of the Canterbury population identified as Māori.

When a statistic is so out of whack the obvious recourse is to check it against another source.

MSD regional data for Canterbury June 2022 shows Māori made up just 21.1% of all people on benefits whereas NZ European accounted for 71.2 percent.

The data has been inverted.

But the error isn't even consistent.

There are eleven regions and tables contained in the annual report.

The data is correct for just three - Northland, Auckland and Waikato.

What surprises me is that even faint familiarity with MSD data would set off alarm bells. It is simply implausible that 77 percent of beneficiaries in the Southern region are Māori.

I returned to the table above and took another look. Apparently, 26.9 percent of beneficiaries in the Southern region have been on a benefit for one year or less; 45.8 percent for more than one year. That sums to 72.7 percent.

What about the rest?

Of course this could all be dismissed as trivial errors.

But if funding is to be race-based in any manner then accurate numbers are extremely important.

The idea is bad enough. Poor execution of it is salt in the wound.

All those extra employees and they can't even report their own data correctly. Sounds like a government department - more is less.

Or - **conspiracy theory alert** - maybe they deliberately switched it so that our Maori Caucus could demand even more money be spent on Maori....to keep them on a benefit.

Nah, they're probably just incompetent, in keeping with their Ministers.

I suspect many readers will not find over 70% maori as at all implausible. What are the ratios in the "correct" regions? As noted by the early Europeans maori are possessed of an inate cunning, many a disinclination for hard work, and with many a tikang/te ao there is lack of obsessions for material status. Coasting along in a stte house on a benefit is very attractive. Observed objectively they are more rational than most of the rest of us who spend our lives beavering for a large estate.

The most shameful thing about the report is that it breaks down MSD benefit recipients by race.