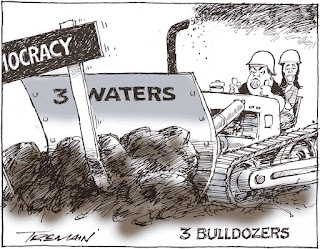 New Zealanders have been well and truly duped by Labour over Three Waters.

From the outset, the primary objective has always been to deliver control of water to the Maori tribal elite. It is only through lies and manipulation, a compliant media, and an absolute majority in the House that Labour – or more accurately the Minister of Local Government Nanaia Mahuta – has been able to progress the reforms to where they are now.

Three key changes have been introduced to give control of water to iwi.

The first involved confiscating water assets from councils and centralising them into four mega Water Services Entities so ‘co-governance’ arrangements could be introduced.

‘Co-governance’ is a benign euphemism for ‘tribal rule’. It’s a clever description, because it ‘sounds’ equitable, even though it’s profoundly discriminatory since it gives tribal minorities veto rights over those representing the majority of New Zealanders.

With co-governed Regional Representative Groups giving the tribal elite ultimate control over Three Water Entities at a strategic level, a way had to be found to deliver local control to iwi.

That has been achieved through the Bill’s ‘Te Mana o te Wai Statements’ – which the Boards running the Water Entities must ‘give effect to.’ These statements can cover any aspect of water services: whether pipes, consents, levies – nothing is off the table.

In fact, when Newstalk ZB’s Heather du Plessis-Allan asked the Deputy Prime Minister Grant Robertson whether Te Mana o te Wai Statements could enable local Maori to “control what a farmer does with his or her pond on their private land?”, the Minister could not answer: “Ah, no, I wouldn’t think so … yeah, look obviously Heather I’d need to refer to the detail…”.

Just like their proposed overhaul of hate speech laws, which were eventually shelved, Labour’s Cabinet Ministers do not have a proper grasp of what they are about to inflict onto the country.

The only one who really understands the insidious detail is Nanaia Mahuta, and she’s pushing her own agenda.

To ensure tribal control over the new Water Services Regulator, the Minister established a powerful Maori Advisory Group with the authority to issue directives to the regulator’s Board.

So, with the plan for tribal control of water stitched up, the Minister set about manufacturing a crisis to justify to the public her confiscation of their water infrastructure and services.

A multi-million-dollar advertising campaign was launched to build public support for reform. By depicting sludge coming out of taps it aimed to discredit local councils.

The Minister also embarked on a disinformation crusade – exemplified in her second reading speech on the Bill: “We need to take this crisis seriously. We need to act with urgency. I do not use the word ‘crisis’ lightly, but when an estimated 34,000 New Zealanders get sick from drinking water each year, that is a crisis.”

The Minister’s on-going claim that a tsunami of 34,000 people get sick each and every year from drinking contaminated council water, is a complete and utter fabrication. It is not based on current health data but on an ESR report estimating the incidence of waterborne gastro-intestinal disease in New Zealand that was prepared for Helen Clark’s Labour Government in 2006!

The 34,000 figure was the upper band of a ‘guestimate’ based on UK statistics because the incidence of disease in New Zealand was insufficient for modelling purposes: “the size of most outbreaks is small, averaging nine cases per outbreak in 2000-2004, and is smaller than any other countries for which data are available.” The author even highlighted the unreliability of his estimates by noting in the report: “The reliability of this method is questioned by the author.”

Apart from one tragic accident in 2016, when farm runoff entered a town water supply during a storm, New Zealand’s freshwater quality has been amongst the highest in the world.

The fact that the Minister is using unreliable sixteen-year-old figures to push her crisis narrative, demonstrates only too clearly that she simply cannot be trusted.

Then there’s the litany of lies about the new system including the false claim that councils will still ‘own’ their confiscated assets even though they will have no control over them – and that water users will save money even though every independent analysis warns the figures do not stack up since the alleged “savings” are based on a huge escalation of debt that’s never repaid.

In effect, Three Waters is a Ponzi scheme based on interest rates of 3.5 percent, that maintains the illusion of a sustainable business for as long as the credit lines remain open. But with the new mega agencies reportedly spending money like water, and interest rates set to double, are Minister Mahuta’s glib assurances about the affordability of her scheme credible?

Or does she even care?

The problem for New Zealand – and for Jacinda Ardern – is that Nanaia Mahuta has turned Three Waters into a legacy project.

Through this legislation she aims to deliver tribal control of all New Zealand water – continuing the work of her parents Sir Robert and Lady Raiha Mahuta, who, with the assistance of her sister Tipa Mahuta and the former New Zealand First MP Tukoroirangi Morgan, successfully established ‘co-governance’ of the Waikato River.

At a recent iwi leaders meeting, Tuku Morgan condemned an alternative Three Waters plan, which excluded co-governance, saying, “We will never be denied, we will never go silently in the night, our voice must be heard at the table and we must take our place, end of story.”

Those are not the words of someone committed to using their Three Waters co-governance role to serve the public good, but the arrogant and intimidatory demands of an elitist, who believes they have the ‘right to rule’.

And that is the ethic underpinning Three Waters. Any hope that water services under a tribal veto would serve anyone other than an iwi minority are naive and misguided. These tribal rulers will call the shots and they will be accountable to no-one. They will not be able to be challenged, nor sacked. They represent the totalitarian tribal rule objective of Nanaia Mahuta’s legacy project.

The extension of the Three Waters legislation from dealing only with freshwater, stormwater and wastewater to include coastal water and geothermal water was buried in Parliament’s Finance and Expenditure Select Committee’s 200-page report on the Bill.

Without any public consultation at all, the Bill has been expanded so all water in New Zealand will be controlled by iwi.

What a legacy Minister Mahuta has created!

How long will it be before iwi introduce a levy on freshwater – so they can receive a royalty in perpetuity every time a Kiwi tap is turned on?

How long it will be before geothermal power generators are pressured for a slice of the action?

And, how will tribal control of coastal water out to the 12 nautical mile edge of the Territorial Sea affect the 600 overlapping claims lodged under the Marine and Coastal Area Act?

The inclusion of coastal and geothermal water in the Three Waters Bill appeared to have surprised the Prime Minister and key members of her executive.

The Minister of Energy and Resources Megan Woods confirmed as much during a radio interview with Newstalk ZB’s Mike Hosking: “The select committee report was the first time I’ve ever heard of the thought of including any more waters into the Three Waters bucket. So this hasn’t even been talked about by Cabinet… As the Minister of Energy and Resources, I’d probably have some views on geothermal! It’s not something we’ve even considered.”

And at Monday’s post-Cabinet press conference, when questioned about the inclusion of coastal and geothermal water in the Three Waters legislation, the PM still seemed confused: “My issue is that I’m struggling to quite understand the question that you’re putting to me…”

It turns out that while the Ministerial Working Group on Three Waters had suggested including coastal water in the Bill as one of their 47 recommendations, back in April Minister Mahuta had advised Cabinet that such a change would not be introduced until the second Three Waters Bill, since it would require a substantial work programme to ensure alignment with the new resource management legislation, new water regulations, and climate change planning.

Although geothermal water was not mentioned by either the Working Group or the Minister in her Cabinet paper, it has now been included in the Bill, alongside coastal water – even though the Minister’s substantial work programme has not been carried out.

Is rushing these into law now, instead of waiting for the next bill, a sign that panic is setting in?

Has Minister Mahuta suddenly realised that her Cabinet colleagues are unlikely to support the controversial expansion of iwi powers to cover all New Zealand water in an election-year bill?

Since coastal and geothermal water were not included in the Bill until after submissions had closed, members of the public have had no opportunity at all to have a say on this explosive issue.

The Prime Minister has now made the bizarre claim that including coastal and geothermal water does not alter the “scope” of the Bill – and she asked for it to be clarified.

Minister Mahuta obliged through Supplementary Order Paper 306. All references to “coastal” and “geothermal” water have now been removed from the Bill and replaced with the term ‘water’ – “as defined in the Resource Management Act” – where it states “water includes fresh water, coastal water, and geothermal water”!

So, while coastal and geothermal water are still part of the Bill, the Government’s subterfuge makes it harder to ‘see’ that three waters has now become five.

“Unfortunately, the consequences of Three Waters go beyond a debate about infrastructure. The lies, the gross dishonesty, and the consultation charade will inevitably damage the public’s confidence in Parliament and democracy itself.

“Who now could be bothered putting any effort into making a submission to Parliament when they not only know their opinion will be ignored, but realise they are being played and treated like a fool?

“And why would anyone have any respect for Parliament and politicians when politicians have destroyed any notion that we live in a representative democracy founded on the principles of ‘government of the people, by the people, for the people’.

Many questions arise from this whole Three Waters debacle, including who is actually in charge?

It certainly appears that Nanaia Mahuta is bulldozing her legacy project – tribal control of all New Zealand water – onto the country, over-riding the Prime Minister and Cabinet, and treating the public like fools.

Filled with dangerous detail that will undermine New Zealanders’ rights to water and our democratic way of life, this Bill is a huge mistake.

Jacinda Ardern needs to rein in her errant Minister and scrap Three Waters while there is still time.

*Do you believe the primary objective of the Three Waters law change is to deliver control of all New Zealand water to Maori?