Why the Swiss people rejected the new climate law

1) Climate referendum: Swiss reject higher carbon taxesSwiss Info, 13 June 2021Swiss voters have rejected legislation at the heart of the country’s strategy to abide by the Paris Agreement on Climate Change. The CO2 law was turned down on Sunday by 51.6% of voters.

The negative outcome represents a major upset in the tiny nation that is disproportionately affected by climate change. Switzerland’s temperatures are rising at about twice the pace of the global average and its Alpine glaciers risk disappearing by the end of the century.Opinion polls as recently as May suggested the CO2 law had strong popular support. What is clear is that the “no” camp gained significant ground in recent weeks, particularly in rural regions. Urban cantons including Basel, Zurich and Geneva voted in favour of the bill. But 21 of the 26 Swiss cantons opted for a no vote. The financial arguments put forward by opponents of the law are credited with tipping the balance in a period of crisis marked by the coronavirus. The emotional debate over anti-pesticide initiatives also overshadowed the issue of climate urgency.The cost of changeIn line with the Paris accord, Switzerland aims to be climate neutral by 2050. But how to best achieve that has been hotly debated. As a first step, the country’s CO2 law was revamped in a bid to reduce the Alpine nation’s greenhouse emissions to 50% of 1990 levels by 2030. Without it, Switzerland’s chances of meeting such goals are in doubt.The government strategy had won the support of all political parties except for the right-wing People’s Party. The new CO2 law included various measures targeting road vehicles, air traffic, industrial emissions, and the renovation of buildings. Those who cut their CO2 emissions would have benefited from exemptions.The aim was to curb the negative effects of climate change “without penalising the population or companies”.But not everyone was convinced and opponents succeeded in collecting enough signatures to trigger a referendum on the issue. Critics included the oil lobby, homeowners, car associations, and GastroSuisse, the catering industry’s umbrella organisation. They viewed the additional taxes as too expensive and unfair as part of the population has no choice but to use a car.Full story 2) Heinz Schmid: Why the Swiss people rejected the new climate lawGlobal Warming Policy Forum, 14 June 2021 Good news: The Swiss people have rejected the CO2 law in the referendum on Sunday, with 51.6% of voters saying no to the proposed carbon taxes. 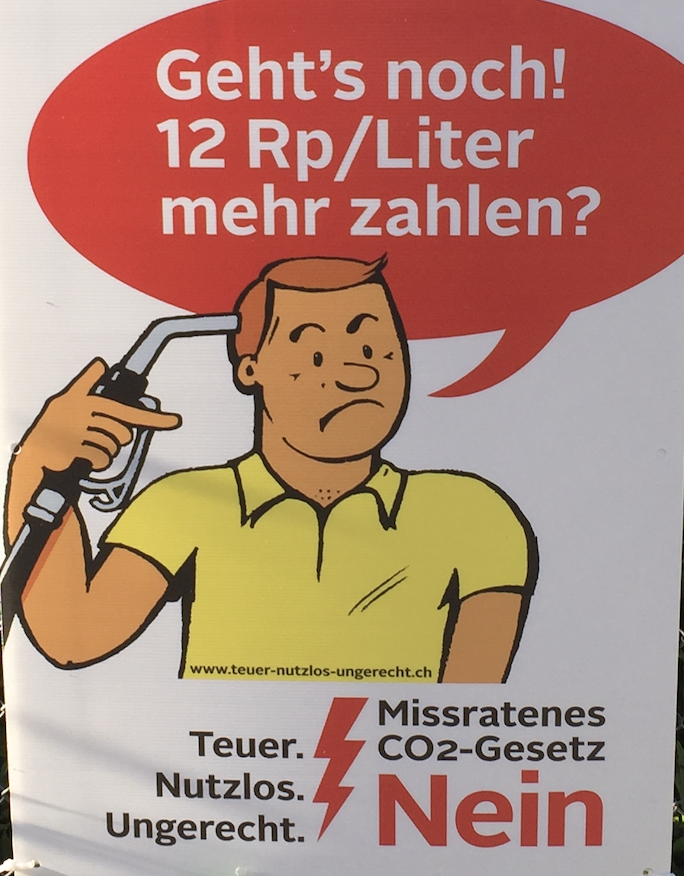 Thus the CO2 law will not come into effect. Only two cantons accepted the law, Vaud and Zurich. Like many other types of left/green laws there was a clear distinction between rural and urban Swiss. Conservative rural cantons rejected the carbon law very clearly. In the rural village in the canton of Thurgovie were we live 69% of voters said no. Our system of direct democracy has once again proven its democratic value. Both the Swiss government and parliament (the Senat and the House of Representatives) supported the CO2 law. The CO2 legislation would have been very severe for Swiss households and businesses, putting a tax of more than 200 Swiss Francs per ton of CO2 on energy. Gas and oil heatings would effectively have been prohibited and petrol at the pump costing 12 raps more per litre bringing the total tax levy up to more than 1 CHF per liter.  In the case of the CO2 law the result is also a triumph over the main street propaganda. In Switzerland, the only political party agains the CO2 was SVP (Swiss Peoples Party). All other parties were in favour of the law. It went so far that even the Swiss Automobile Association (your RAC) was for the CO2 law too. But even more important was the fact that all mainstream media were in favour of the law too, including Swiss TV and Radio. There are just a few newspapers now in Switzerland promoting a politic of reason and conservative values. One is Weltwoche with its owner Roger Köppel, another one is the (newly) Nebelspalter. Both are weekly newspapers like the Economist. By consequence the result is a triumph of reason over propaganda. Which – and now I come back to what you said – shows that people vote much more intelligently than  politicians and mainstream media believe, if presented with the key facts and arguments.  Todays’ referendum was very important for Switzerland because it demonstrated to both both government and parliament that we Swiss are more down to earth and show more common sense that our political elite.