GWPF Newsletter: US climate pledges on shaky ground as Biden’s climate agenda is bogged down in divided Congress

China is the real winner of Western climate politics

1) US climate pledges on shaky ground as Biden’s climate agenda is bogged down in divided CongressFinancial Times, 17 June 2021 2) On the brink of darkness: Texas faces risk of power blackouts on WednesdayBloomberg, 16 June 2021 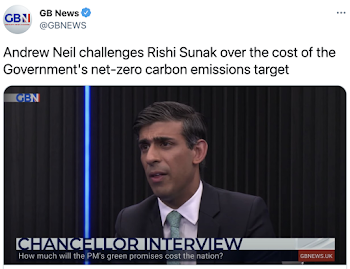 In the run-up to Andrew Neil's interview with the Chancellor of the Exchequer, GB News interviewed Andrew Montford and Matt Ridley on Net Zero, blackout risks and climate-related issues. The responses by viewers to the astronomical costs of Net Zero was a clear indication that most Britons have no idea what costs and damages they are facing (see last link below). It is hoped that the editors will realise that there is a huge appetite for a broader spectrum of views, and that their viewers are extremely keen to listen to critical voices that are simply ignored or banned by Britain's other TV channels. Here are the various links to yesterday's GB News interviews: Andrew Neil challenges Rishi Sunak on Net Zero costshttps://twitter.com/GBNEWS/status/1405286563035025411 Interview with Andrew Montfordhttps://www.youtube.com/watch?v=LFS3s71w3aI&t=186s Interview with Matt Ridleyhttps://twitter.com/GBNEWS/status/1405410292071342083 Viewers' comments on the cost of Net Zero https://twitter.com/GBNEWS/status/1405425403892731906  8) Rishi Sunak’s waffle exposed the flaw in Boris’s green agendaPatrick O'Flynn, The Spectator, 17 June 2021Who pays? It is one of the most important questions in politics, especially when it comes to the sort of expensive zeitgeisty ideas that governments love to take a reputational ride on. When Margaret Thatcher was Tory leader, she tried to exempt her party from this charge of vulnerability to fashionable notions that come with eye-watering price tags attached, once observing: 'The Labour party scheme their schemes, the Liberal party dream their dreams, but we have work to do.'Nobody who has followed the career of Boris Johnson at all closely would seek to exempt him. Indeed, 'schemes and dreams' appear to be what make him tick.So it is a sign of the baleful groupthink afflicting our political broadcasters that so little effort has been put into pressing ministers on how they propose to fund the Government’s most expensive dream of all: the commitment to deliver net zero carbon emissions by 2050.Presumably, the imperative for reducing emissions to zero is such a fixture of the woke political playbook that even asking how much it will all cost – and who will pay – is judged to be a heresy. Up until now the parameters of debate around this policy have been largely focused on why it isn’t being delivered even sooner.But all that changed on Wednesday evening when Andrew Neil decided to subject Chancellor Rishi Sunak to a full internal examination on the very question of who pays on his show on GB News. And the exchanges with Sunak were highly illuminating. The Chancellor tried to get away with a pat answer, saying that we will all pay because the government doesn’t have any money of its own. Then he tried to talk down an estimate of £1 trillion – that’s a thousand billion pounds or half of a full year’s UK GDP – given by Philip Hammond when he was chancellor. But he would not give a figure of his own.The cost of technologically-driven environmental measures tended to fall over time, said Sunak, citing the example of offshore wind farms and electric vehicles. Looking just at the cost while ignoring the economic opportunities created was also wrong because it constituted only examining 'one side of the ledger', he added. And the costs would be spread over a very long period anyway because 'this is a multi-generational project'. On this last point, this doesn't appear to be correct, given that the Government’s target is to get three-quarters of the way to net zero by 2035.Sunak's high-altitude waffle was never going to suffice against such a merciless interrogator as Mr Neil, who swiftly pinned the Chancellor down on the most electorally perilous detail of the policy: the inevitability of having to rip out household gas boilers and replace them with heat pumps at an estimated £10,000 a pop. Scale that up on the basis of 25 million boilers being replaced nationwide and you get a bill of £250 billion just for this aspect of the race to net zero.'I’m just trying to find out on behalf of our viewers who is going to pay this ten thousand quid bill which your government will tell people to do,' Neil told the Chancellor.And that was when even someone as quick on his feet as Sunak was cornered.'“We haven’t…yet,' he weakly replied. 'That’s the plan,' retorted Mr Neil. 'Well, you are speculating on what might be the plan,' said Sunak.So the Chancellor of the Exchequer will not publicly commit to what every leading expert says is a pre-condition for achieving net zero on the Government’s published timetable. Clearly that is because he senses, rightly, that ordering people to remove working gas boilers and install heat pumps at enormous cost may turn into the most unpopular Tory policy since the poll tax. And he doesn’t want his own name attached to it. 9) ‘Sick of the woke agenda’: UK gets conservative news alternativeSky News Australia, 17 June 2021GB News presenter Nana Akua says GB News has only been on air for four days but is already “striking a chord” with the British community in offering a conservative news alternative. 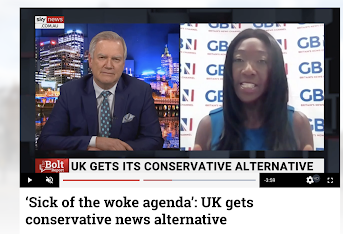 Former editor and BBC presenter Andrew Neil opened GB News, which is already beating its competitors when it comes to ratings. “We’ve got a bigger audience now than Sky News UK, and it’s just day four,” she told Sky News host Andrew Bolt. “It’s fantastic, we’re loving getting our narrative out there as well.” Full interview