Poland was singled out by EU colleagues as one country attempting to sink the bloc’s hopes to significantly reduce its carbon emissions in the coming years.Warsaw is concerned that it will be left worse-off under plans for a new burden-sharing mechanism for climate targets that is due to be proposed by the European Commission. As a result, the measure was dropped from conclusions on climate discussions held by EU leaders at a special summit in Brussels.The EU’s so-called Emissions Trading System is meant to divide up emissions cuts between countries based on a formula.The mechanism relies mostly of Gross Domestic Product, meaning poorer countries will have to slash their greenhouse gas outputs less. However, the finer details of the system detailing emission rules were dropped from a planned statement by EU leaders.Poland was said to have rejected endorsing the conclusions and instead, a placeholder was inserted.It said: “The European Council will revert to the matter at an appropriate time after the Commission’s proposals have been submitted.” Polish PM Mateusz Morawiecki argued the system would hit countries like his that aren’t at an advanced stage in their transition away from high-polluting energy sources. Warsaw wants compensation for plans to expand the ETS, which Commission boss Ursula von der Leyen suggested could also include cars and buildings in the future. Mr Morawiecki told the European Council summit that the measure would cost an additional €4 billion for his country.Romania, Hungary and Latvia also issued similar warnings, while richer countries, including Germany, urged Eastern states to stomach the new rules. EU leaders were discussing the Commission’s “Fit-for-55” policy package, which aims to detail how the bloc can cut emissions 55 percent by 2030. In a post-summit news conference, Mrs von der Leyen admitted the new plans “may have a social impact”. There is an expectation that consumers may have to pay higher fuel and heating bills unless a compensation system is introduced. Belgian PM Alexander De Croo told reporters there was no point holding climate talks in the current vacuum. Full story 2) Poland tells EU leaders that meeting climate rules makes the ‘poor, poorer’Politico, 25 May 2021 The new era of EU climate politics looks a lot like the old one, with Poland standing almost alone at Tuesday’s European Council, insisting that current emissions rules are geared toward the rich. 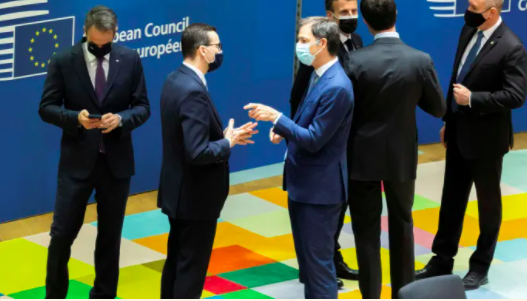 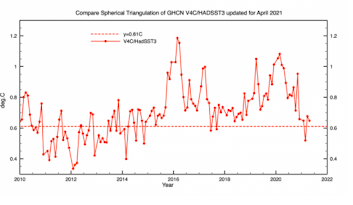 2021 so far is comparatively cool, roughly the same as in 2014. Source Clive Best blog

The latest report from the World Meteorological Organisation says that over the next five years at least one of them will exceed that limit with a 90% certainty dislodging 2016 as the world’s warmest year, “these are more than statistics,” says WMO Secretary-General Prof. Petteri Taalas. “Increasing temperatures mean more melting ice, higher sea levels, more heatwaves and other extreme weather, and greater impacts on food security, health, the environment and sustainable development,” he says. His claims are the habitual alarmist mantra in contrast to empirical observations. Taalas adds that 2020 was among the top three warmest years despite being influenced by the cooling La Nina effect. It’s a pity he didn’t also mention that the warmest year on record, 2016, attained its position because of a very intense El Nino warming effect. It is noteworthy that any annual rise in global temperature is blamed on climate change while any fall in temperature is regarded as natural variability.The report is part of the “Annual to Decade Climate Update.” This is an interesting period since the definition of ‘climate’ is taken to be a 30-year average, but then an “Annual to Decade Weather forecast,” wouldn’t convey the same urgency. So far 2021 is a very cool year with global temperatures similar to those seen fifteen years ago when they were meandering nowhere – until influenced by the 2007 and 2015 El Ninos. I suspect that if 2021 continues to be a comparatively cool year it will be rarely mentioned in the run up to COP26. But if the WMO’s models are right then we can expect a large increase in global temperature after the current La Nina conditions even if there is not an El Nino. The obvious conclusion to be drawn is that annual temperature changes are, to the first order, modified by the lead up to and the aftermath of El Ninos and La Ninas which dominate the long-term trend of greenhouse gas forcing. We have been waiting for years for the warming trend to overwhelm these ocean cycles. Having one year reaching 1.5 °C doesn’t do that. Feedback: david.whitehouse@thegwpf.com 9) And finally: Another nail in the coffin for Western oil industry as Russia, China, Iran and green activists celebrateThe Wall Street Journal, 27 May 2021 Shell and Exxon lose landmark decisions on the same day, demonstrating growing threats to fossil-fuel companies from activists and investorsExxon Mobil Corp. and Royal Dutch Shell PLC suffered significant defeats Wednesday as environmental groups and activist investors step up pressure on the oil industry to address concerns about climate change. In a first-of-its-kind ruling, a Dutch court found that Shell is partially responsible for climate change, and ordered the company to sharply reduce its carbon emissions. Hours later in the U.S., an activist investor won at least two seats on Exxon’s board, a historic defeat for the oil giant that will likely require it to alter its fossil-fuel focused strategy.The back-to-back, watershed decisions demonstrated how dramatically the landscape is shifting for oil-and-gas companies as they face increasing pressure from environmentalists, investors, lenders, politicians and regulators to transition to cleaner forms of energy.“The events of today show definitively that many leaders in the oil-and-gas industry have a tin ear and do not understand that society’s views and the legal and political environment in which they operate are changing radically,” said Amy Myers Jaffe, a professor at Tufts University’s Fletcher School who has advised energy companies.Climate-change activists celebrated after a district court in The Hague ruled Wednesday that Royal Dutch Shell has to reduce its emissions by 45% by 2030. Many oil companies have begun adopting comprehensive plans to reduce emissions, and some, especially in Europe, have diversified into renewable energy. But reducing emissions without sacrificing some returns is proving challenging, and many face skepticism about their strategies. “It’s a real market predicament,” said Peter Bryant, a managing partner at business consultant Clareo. “Even if their plan is sound, it doesn’t matter right now.” The Shell ruling, issued by the district court in The Hague, found that Shell must curb its carbon emissions by 45% by 2030 compared with 2019 levels—and that the company was responsible not only for lowering its own direct emissions from drilling and other operations, but also those of the oil, gas and fuels eventually burned by consumers. Full story