3) The strange truth about Japan’s climate change targetPhilip Patrick, The Spectator, 1 May 2021 4) 20% of electric vehicle owners in California switched back to fossil fuel because charging their cars is a hassleBusiness Insider, 30 April 2021 5) Chinese scientists: Most climate models fail to reproduce global warming slowdownGWPF & Science China Earth Sciences, 24 April 2021 6) Steven Koonin: Questioning the Climate-Change NarrativeNational Review, 4 May 2021 7) Tilak Doshi: Let’s work for science with integrity -- Steve Koonin’s new book Forbes, 30 April 20218) Matthew Crawford: How science has been corruptedUnherd, 3 May 2021 9) And finally: Does Britain really wants to go to war for the climate?Ben Pile, Spiked, 4 May 2021

1) The truth about Joe Biden’s climate summit: Unrealistic pledges revealed as grandstandingGWPF, 3 May 2021 Most lofty climate pledges look increasingly unrealistic, exposing governments to criticism of political hype and grandstanding. Of the top 20 global CO2 emitters, not a single one is hitting its climate goals as outlined under the Paris Agreement, according to recent data from the Climate Action Tracker. "The high-level pledges over the last year, in particular, have been impressive with major economies such as the European Union, Japan, South Korea and China all promising to get to ‘net-zero’ emissions or carbon neutrality at some future date,” Victoria Cuming, the head of global policy analysis at BNEF was quoted in February. “But the reality is that countries simply haven’t done enough at home with follow-through policies to meet even the promises made more than five years ago.” At President Biden’s recent Leaders’ Summit on Climate, 40 world leaders repeated or made new emissions pledges and promised yet again to be very good. Most of these lofty pledges, however, look increasingly unrealistic, exposing governments to criticism of political hype and grandstanding. 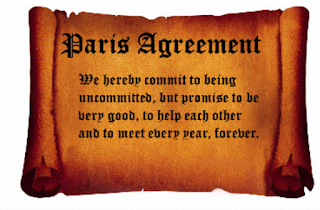 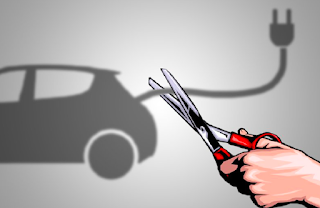 In roughly three minutes, you can fill the gas tank of a Ford Mustang and have enough range to go about 300 miles with its V8 engine.

But for the electric Mustang Mach-E, an hour plugged into a household outlet gave Bloomberg automotive analyst Kevin Tynan just three miles of range. “Overnight, we’re looking at 36 miles of range,” he told Insider. “Before I gave it back to Ford, because I wanted to give it back full, I drove it to the office and plugged in at the charger we have there.” Standard home outlets generally put out about 120 volts of power at what electric vehicle aficionados call “Level 1” charging, while the high-powered specialty connections offer 240 volts of power and are known as “Level 2.” By comparison, Tesla’s “Superchargers,” which can fully charge its cars in a little over an hour, offer 480 volts of direct current.  That difference is night and day, according to a new study published in the journal Nature Energy by University of California Davis researchers Scott Hardman and Gil Tal that surveyed Californians who purchased an electric vehicle between 2012 and 2018. Roughly one in five plug-in electric vehicle (PEV) owners switched back to owning gas-powered cars, in large part because charging the batteries was a pain in the… trunk, the researchers found. […] The researchers warned that this trend could make it harder to achieve electric vehicle sales targets in California and other countries, and the growth of the market overall. “It should not be assumed that once a consumer purchases a PEV they will continue owning one,” Hardman and Tal wrote. “What is clear is that this could slow PEV market growth and make reaching 100% PEV sales more difficult.” Fixing the charging issue will require more participation from automakers, who have yet to find a profitable way of producing electric cars. Even Tesla, easily the leader in the category, was only able to eke out a first-quarter profit by selling energy credits and bitcoin. Full story 5) Chinese scientists: Most climate models fail to reproduce global warming slowdownGWPF & Science China Earth Sciences, 24 April 2021A new study by a team of Chinese climate scientists and published by Science China Earth Sciences, a journal cosponsored by the Chinese Academy of Sciences and the National Natural Science Foundation of China, reveals the failure of most of the latest climate models to reproduce the global warming slowdown during 1998–2013. 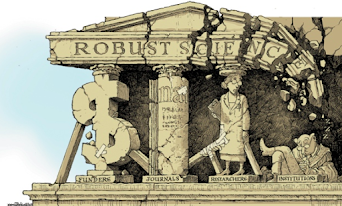 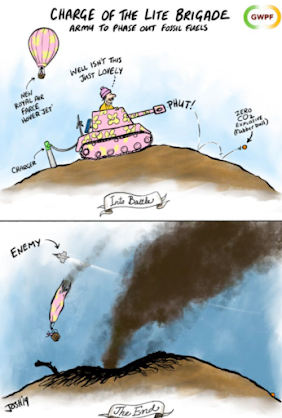 Britain’s green army on making contact with the enemy Senior politicians and officials seem to be carving out a new green role for Britain’s armed forces and so-called ‘intelligence’ agencies. According to these reports, troops and spies could soon be doing Gaia’s work… protecting the Amazon from loggers, and covertly monitoring emissions from China’s factories and power stations. The first stirrings of Greta’s Army came in the form of the Integrated Review – titled Global Britain in a Competitive Age – back in March. It set out to describe ‘the government’s vision for the UK’s role in the world’. The review makes a number of bland promises, such as ‘a more robust position on security and resilience’, ‘a renewed commitment to the UK as a force for good in the world’, and ‘an increased determination to seek multilateral solutions to challenges like climate change’. The full text of the review mentions ‘climate’ 90 times across 112 pages, and puts the environment at the centre of foreign policy. Following this, the Ministry of Defence published its own report, Climate Change and Sustainability Strategic Approach. In it, Lieutenant General Richard Nugee sets out his plan to make killing people and blowing things up more easy on Mother Nature. However, despite making lots of statements about intent, and how great the world will be when these intentions are realised, Nugee gives Net Zero explanation as to how this woke, green army will achieve Net Zero carbon emissions. Nugee fails to explain how a nuclear bomb can be used with minimal environmental impact or how an army, navy and air force (and shiny new Space Command) can be built from recycled materials, and powered by wind and sunlight. Then, this month, the new head of MI6, Richard Moore, described climate change as the ‘foremost international foreign-policy item for this country and for the planet’. The ‘climate emergency’, said Moore, gave MI6 a role in keeping tabs on Chinese manufacturing. ‘It is perhaps our job to make sure that what they are really doing reflects what they have signed up to.’ Failed Conservative Party leader William Hauge also riffed on the scenarios created by the Integrated Review. ‘In the past, the UK has been willing to use all of our firepower, both military and diplomatic, to secure and extract fossil fuels’, he wrote for the Policy Exchange think-tank. ‘But in the future, the UK will need to use all of its diplomatic capacity to ensure that these resources are not used and that natural environments are protected.’ Citing the apocryphal destruction of a ‘football pitch-sized area of the Amazon rainforest every minute’ (which has been widely debunked), Hague claimed that ‘realpolitik will leave the UK with a dilemma: ease up the pressure on climate-change delinquents like Brazil or forget about your trade deal’. […] The most striking thing is the message of utter bad faith all this sends out to the world. The government is currently hoping to broker a global agreement at the COP26 later this year. Listening to the green interventionist you would think this was supposed to embody Britain’s status as a ‘global leader’ – as though Britain had conceived and convened the meeting rather than merely being the 26th host country of the tortured annual ritual. Yet what our establishment is essentially saying is that the reward for signing the deal is that Britain’s spies will be watching, and our armed forces will be standing ready to make sure you comply. Stay in your lane, emerging economies! If an agreement is not premised on trust, but will instead be policed by a fading global power, why would any self-respecting, sovereign government sign up to it?So what can we expect from this new era of ecological interventionism? It seems unlikely that green espionage will do anything other than lead to a faster termination of any global climate agreement than, perhaps, Trump suddenly being remade president of the US. Full post