In this week’s NZCPR newsletter we examine the disgraceful attack on seven university professors who expressed concerns about Maori culture and spiritualism being given the same status as ‘science’ in the school curriculum – and we remind readers that time is running out to send in submissions opposing the Government’s proposed hate speech laws; our NZCPR Guest Commentator Graham Adams shares his analysis of the vitriolic attack on the professors; and our poll asks whether the Government should abandon their planned hate speech law changes. 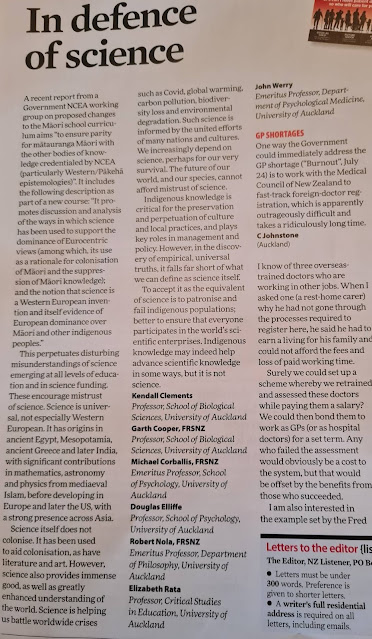 We live in an age where were have crossed the line between pure science and scientism. In scientism philosophical ideas can overide scienctific ideas and influence theory.

Darwin, with no access to modern discoveries about the complexity of the DNA code, and the cellular complexity needed for even the simplest forms of life to exist extrapolated from his observations of a within species adaptation came up with his ideas on the Origin of the Species - life forms building on each to becoming more and more complex. Yet no scientist has shown how the simplest life form could come about, let alone multiply, without DNA coding and cellular machines to carry out the instructions.


By claiming that evolution is fact when it is only an unsubstantiated theory (no-one is able to give a single example of DNA being added to in order to bring about a new species), we see scientism in action. I have written to the Listener suggesting a more apporopriate naming for the NCEA Science Curriculum - the 'Scientism Curriculum'. Then there would be no conflict with introducing non-scientific material into the curriculum. I'm not sure this will make it into print.