Introduction
Gerrymandering[1] is manipulating representation structures to create political advantages for selected individuals and/ or groups. Redistricting enables politicians to pick voters by juggling ward structures in a district.

Rotorua Lakes Council (RLC) has mobilized bias towards co-governance in its Representation Review and towards getting incumbents re-elected. It has been gerrymandering electoral outcomes favorable to its Māori Electoral Population (MEP) which constitutes 28% of the total electoral population. Incumbent elected members have agreed to transfer three General Electoral Population (GEP) seats and one MEP seat into a newly invented At Large ward with four seats that all can vote for. This redistricting tactic will significantly widen the voting base of popular incumbents and double the voting power of MEP voters.

Bias towards MEP interests was indicated on 21 May 2021 when RLC accepted a recommendation from Te Tatau o Te Arawa (Te Arawa United) to establish a Māori ward for the triennium 2022 election. Te Tatau is a policy advisory committee of 14 established and funded by RLC to represent the interests of Te Arawa, mana whenua. It was the only group consulted on the matter which marginalized all other communities of interest affected by the change.

A second source of bias became apparent at the same meeting when RLC agreed “to carry out a wider review of Council’s governance framework, including the purpose, membership and powers of Council’s committees and community boards, and a discussion with Te Arawa and the broader community about the possibilities of strengthening co-governance.” [2]

The third source of bias from that decision is that it defined co-governance as an absolute good beyond question. The Mayor speaks of co-governance as her Nirvana and as a principle of good governance in policy making. It is being implemented as an article of faith. On 20 July, for example, Council established a Co-Governance Committee comprising the Mayor, Deputy Mayor and three Councillors (all Te Arawa affiliated), and five Te Arawa leaders. Its task is to provide recommendations to Council on the Three Waters Reforms, with the Mayor and a mana whenua representative to co-chair the committee.

The fifth source of bias is exclusive participation in the workshops leading to the development of a draft proposal with one option by 31 August to be used for public consultation. Participation was limited to incumbents; the Mayor, 10 councillors, 4 members each of the rural and lakes community boards and the 14 members of Te Tatau.

The sixth source of bias derives from using a decision rule to create “fair and effective” representation. Fairness is a complex concept with dozens of synonyms that can be applied subjectively to different ends. For example, those who believe that the Treaty of Waitangi (ToW) guarantees partnership with mana whenua and 50/ 50 co-governance will regard it as unfair that members of the MEP will only have three votes to elect councillors while members of the GEP will have seven.

The seventh source of bias is the managed production and deselection of representation models to reach the solution predetermined by the Mayor’s power bloc of elected members and senior officials who favour blending the interests of those in the MEP with their own. Eight preliminary models of representation were discussed in closed workshops.[4] At the final workshop they were reduced to three options; Option One that that best meets democratic principles and current law, Option Three that best satisfies ToW principles and the electoral chances of incumbents, and Option Two that fails both, as now explained. 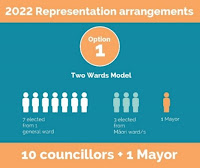 Option 1 best meets democratic criteria, such as providing equal suffrage, because each vote has equal value. The number of votes each voter gets is directly proportionate to the electoral population they belong to.

The strongest objection to Option One is that those on the Māori roll have only three votes for electing councillors while those on the General roll would have seven votes. This difference is perceived as unfair by those who believe that the ToW guarantees partnership with mana whenua and 50/ 50 co-governance. This difference is also perceived as unfair by incumbent councillors who believe that their electoral support comes from both MEP and GEP voters. 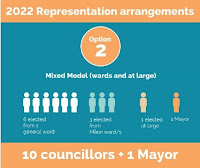 Objections to Option 2 come from local politicians. Those who hold to democratic values object to MEP voters getting a 33% increase in representation through the arbitrary creation of an additional ‘At Large’ ward. Those who hold to ToW values and those who believe their electoral support comes from MEP and GEP voters object that one ‘At Large’ member is inadequate. 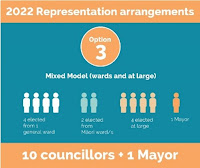 RLC has mobilized seven sources of bias towards co-governance in its Representation Review and towards getting incumbents re-elected, indicating significant predetermination.

The final workshop selected Option Three for public consultations. This means that RLC has gerrymandered representation structures that will double the voting power of MEP voters reflecting the belief that the ToW guarantees partnerships and 50/ 50 co-governance.

Incumbents have also used redistricting to transfer three GEP seats and one MEP seat into a newly created At Large ward with four seats that all can vote for, in the belief that it will broaden their electoral appeal.

Gerrymandering is almost always regarded as a corruption of the democratic electoral process.

Dr Macpherson is Chairman of the Rotorua District Residents and Ratepayers and developed this paper to keep the 1099 members informed about further developments in the Representation Review. He is also an elected member of Rotorua Lakes Council.

As a former Mayor in Waitomo District (10 years ago) I suggested something like option one. That is have two rolls - the number registered on either defining the the number of persons to be elected by each roll.
I don't subscribe to the "equal partnership" concept but do support the one man one vote form of democracy.
My Councilors gave me little support (For a Maori and a General Roll) endorsing the then used urban ward and rural ward with three councilors elected to both plus the Mayor. That concept endured for the next four elections and will be used at the next Local Government election for Members to Waitomo District Council.