In this week’s NZCPR newsletter we undertake a stocktake of New Zealand’s democratic safeguards to assess the resilience of our democracy to attack, our NZCPR Guest Commentator Anthony Willy shares his concerns about the dangers of judicial activism, and our poll asks to what extent you believe tribal co-governance is a threat to New Zealand’s democracy. 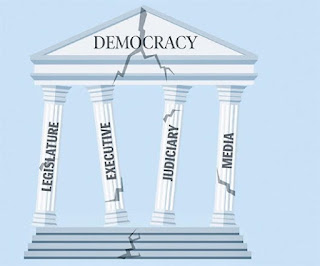 I have despaired at the current state of our media.
But then I watched "Mr Jones" on Netflix (a must watch, that they are removing soon) that recounts how journalists were complicit in Stalin's murder of millions in the Ukraine and I realised they have always been activists.

Dividing up a Democracy
There has of late been a growing feeling of “Division” creeping into New Zealand society. I fear it is bringing us back to a 1960’s mindset. I am in my Eighties and have been here long enough to know what it cost of mind and body to get to where we are. I marvel when I look around and see a country that has been built from scratch all in the last 120 years. In the 50’s we were all struggling but a lot of work was done to build the country after the depression and then WWII. All this with at first with nothing more than hand tools we built NZ. You could feel proud when you look around and see how our fathers and grandfathers built a country and a democracy to get to where we stand out in the world today. I have been a Labour man for 65 of those years. We have seen great changes to our infrastructure and culture in the last 50 years. Today we find Māori integrated into university and high position of trust and power totally on their merit. This takes time, money and attitude changes as every developing nation has found out. I believed that we were becoming an empathetic country with a great sense of “Unity of Purpose” not “A division of Purpose.” Of course, the ongoing complexity of man with its innate different natures meant there was always “A Division of Assets” with the have and have nots since the dawn of civilization and will always be so. It should not be associated or confused as “Division of Purpose”. When we talk about “A “Unity of Purpose” it is seen as an action, policy or decision that offers equal services opportunity or discussion on all matters that effects all of its citizens. In other words, it has to be a decision by the majority of the people under a true Democratic society. That is the only way we can progress forward not backwards. What is now happening is a blatant attack on our nation’s basic Democratic rights that New Zealanders have given their lives for. Since this so-called Labour Party got in, we are hearing day after day a demand from some of our vocal dissidents to “honour” the “Waitangi Tribunal” on everything from Lakes, Beach’s, water control, Electricity and 20 years ago a claim for the right to charge non-Māori New Zealanders for using the god-given “waterways” Rain. We don’t want or need a division of Public Assets. The idea of the Waitangi Agreement was to share what nature had supplied and gave grace and support to all that was around us nearly 150 years ago. Nobody should ever have total sovereign rights over anybody, just the same with all equal rights. The total value of all finalised settlements was $2.2 billion been paid once and for all for compensatory injustices on land lost or taken. And still goes on over the last 25 years. More than any other nation on earth the people of New Zealand have integrated the Māori native people who arrived in New Zealand before the Europeans. No nation can ever grow and be united when you have division and dissension and you divide the nation up by language and ethnicity as is being surreptitiously imposed into our multi-cultural diversity people. We have of course to be seen as to be right and just. The changing facts are clear to see. This Government is hellbent on looking backwards and setting us back 200 years. That in no way enhances the wellbeing of this proud nation. It is dividing us into distractions. Especially at this time when we should be working together on what programs we as a Nation need to put in place and to agree together to stop “Global Warming. Only then we will all know our future and our grandchildren’s future is secure.”. I quote. What is going on is to “Change the Staff and Rules" on The Titanic as it slowly slips under the sea”. There is a strong growing feeling of mistrust, a change of plans, of leaderlessness while secret agendas take place We need statements of intent from the government before we do anything whatsoever.