Nothing like a survey to prove what we all know to be true: The media is biased.
A group called MediaBias has released the results of media monitoring for the period Oct 1 2019 to Aug 31 2021.

They say, "MediaBias is a service offered as a public good, that measures political bias in the New Zealand media, using a machine learning model that evaluates the sentiment of sentences from news articles and blog posts containing the names of Members of Parliament (MPs) and political parties."

And who was the most biased of them all? Of the mainstream media the most left-learning were:

So why is the mainstream media so biased?

Undoubtedly reporting will be influenced to some degree by the fortunes or misfortunes of the political parties themselves (failed leadership coups and the like). Or it may of course reflect the political bias of those controlling the content, or maybe the political views of those providing the funding. Is it a coincidence that the most pro-Labour media are those that could not survive without funding from the Labour government? Or is it just that journalism is an industry that attracts lefties? Or is it because journalists who don't toe a woke line get cancelled?

The left-wing also dominates the blog space. On the left were, in order of bias:

While the blogs are usually upfront about their advocacy stance, the mainstream media are much less candid and continue to swear allegiance to journalistic principles of accuracy, fairness and balance. Perhaps they should also have regard to the guidelines issued by the Media Council which includes the comment that "in articles of controversy or disagreement, a fair voice must be given to the opposition view".

The full survey results may be seen HERE >>> 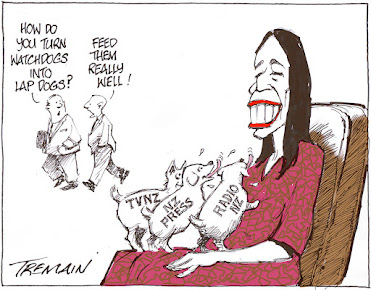 Regarding New Zealand tv, radio and newspapers. People have free choice. Do not watch or buy it. I have not done so for two years and am much the happier for it. My main reason being that I want news and facts not opinion and outright nonsense. I now get my information from Sky News Australia and others. If our media don't get the advertising revenue and the support from the government they might have to re-think their strategy.

This could be a way to return more balance to our media. Unfortunately, people just whinge and moan about it so I have no sympathy.

There are many ways to seek out information in this day and age.

It's great to know officially what we already knew.

Just goes to show what money can buy.

Given this survey is over an almost 2 year period, it would be interesting to see data for the 11 months since last year's election.

Thanks for the comment Ian. The graphs on the right-hand side of the survey page (go to it using the link above) show the trend.

What I did notice but did not mention in the body of my text is the NZHerald is trending to a more left wing bias. That could be as a result of them launching Kāhu News, which one could speculate may have been in response to the $55m Sustainable Journalism fund launched in February this year. TVNZ is also trending more left-wing in its bias.

As a media professional who spent nearly 40 years in radio and print media I'm deeply saddened and depressed by the shocking media standards in NZ today. Woke, Left, Marxist it all applys to today's embarrassing media. As the Nazi's and Stalin's lackeys found out , control the media and you can pretty much brainwash an ignorant proportion of the population. This Labour Government has failed in just about everything except its infiltration and cunning control of the media.