Cam Slater: A Ferry Breaks Down and Curious Coincidences

Today there is another protest against the Government in Wellington, and what do you know there are several curious coincidences all happening at the same time.

First up is Stuff’s egregious and shameless attack against a media personality who also happens to have a bigger audience than them. Shortly after the media attack the first curious coincidence occurs, Facebook moves to shut down Chantelle Baker‘s Facebook page just days before the protest

Prominent anti-mandate protester Chantelle Baker has been booted from Facebook after sharing harmful disinformation to her platform.

The daughter of former New Conservatives leader Leighton Baker confirmed on Instagram that her page, which had boasted 97,000 followers, was taken down indefinitely on Saturday evening.

Meta, which owns Facebook, has previously said it doesn’t allow people to share misinformation on their profiles that could lead to harm.

“People who repeatedly breach these policies will have restrictions placed on their page, if removals hit a certain threshold we will remove the page. We strongly encourage people to report content, so we can review it and take the appropriate action,” a spokesperson for the company said.

Baker, a self-proclaimed ‘news personality’, was a prominent figure in the anti-mandate protests at Parliament earlier this year, during which she made false claims including that police officers started the fires despite video footage showing otherwise. She also shared information that contradicted public health advice.

Baker said she is contesting Meta’s decision to remove her page.

Unlike other bought, bribed and paid for media The Platform interviewed Chantelle Baker giving her a right of reply:

The next curious coincidence is the amazingly timed ’emergency repairs’ necessary on the Cook Strait Ferry over the next 24 hours.

Interislander sailings on the Aratere ferry have been cancelled due to urgent repairs.

It means there will be no Interislander passenger ships sailing for the rest of the day, which could affect any anti-government protesters making their way from the South Island to the capital.

KiwiRail executive general manager Walter Rushbrook said there was an issue with the ventilation system for the Aratere’s engines.

“We are working to make the repairs as quickly as possible, but the system is difficult to access.

“At this stage we expect Aratere to resume sailing tomorrow, providing the work proceeds as planned.”

Rushbrook apologised for the disruption to passengers and freight customers.

What a coincidence…obviously totally unrelated to the protests at all.

Then we have the sudden banning of an Australian journalist heading to New Zealand to cover the protests. 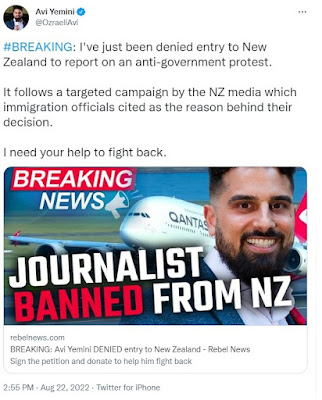 How curious…that this happens after the NZ Herald ran an un-bylined hit piece about Avi Yemeni and Real Rukshan, describing a Jew and a Sri Lankan as “far right misinformation superspreaders”.
It has now been confirmed that the article was used by Immigration NZ to forbid his entry to New Zealand.

Rebel News reporter Avi Yemini has sensationally been denied entry to New Zealand to report on an anti-government protest in Wellington.

It follows a targeted campaign by the New Zealand media to paint Yemini, an experienced journalist, as a ‘far-right conspiracy commentator’ with officials citing the fabricated media report as evidence to deny his entry.

Qantas informed Yemini at check-in that his passport was flagged by New Zealand immigration, and he was then subjected to an over-the-phone interview with an immigration official in New Zealand.

Yemini was advised that pursuant to Section 97 of the country’s 2009 Immigration Act, that the officer had the power to refuse his entry.

Sarah, the immigration officer who refused to give her last name, informed Yemini that she came to the decision on her own after reading the story in The New Zealand Herald.

How curious. The NZ Herald hit piece used emotive and pejorative terms effectively calling these two journalists vermin who can legitimately be demonised.

They even quoted Avi Yemeni out of context claiming he was “the world’s proudest Jewish Nazi”. They clearly don’t know that he was taking the piss out of someone who had in fact described him as such. Instead, they have taken it completely out of context and smeared him falsely and, as a result, Immigration NZ has now done the same thing.

No journalist put their name on this article. It would have been a copy and paste from an email sent to them by a leftwing activist.

How absurd is it that, the NZ Herald can now effectively block people from coming into the country by writing nasty and vindictive hit pieces against them?

I’m sure it is all just a series of terribly timed coincidences and nothing at all to do with the strong arm of the state flexing its muscles in an attempt to silence the growing numbers of citizens who have simply had enough of the worst Government this country has ever seen.

They really do not want to give up their powers. They are going hard out to protect their tyranny and these coincidences just show us how far they will continue to go to perpetuate their tyranny.
Cam Slater is a New Zealand-based blogger, best known for his role in Dirty Politics and publishing the Whale Oil Beef Hooked blog, which operated from 2005 until it closed in 2019. This article was first published HERE.

How long will we have to wait to hear Luxon and Seymour condemning all this?

A long time, if it ever happens, is my guess.

It would seem the long March is almost complete. The blind apathetic and decent majority of this once great nation will be unable to turn this titanic away from the iceberg that is total Maori dominance come next election.
Democracy is already compromised. The irony is we all seem happy to allow a polarizing character like Brian Tamaki to speak for us at the gates of parliament. Where are the representatives of true democracy inside the beehive.