Cam Slater: Why Should People Listen to Ardern?

The NZ Herald buried an interesting story deep within their website, where it is revealed that a majority of people no longer listen to anything Jacinda Ardern has to say about anything, but especially about Covid. 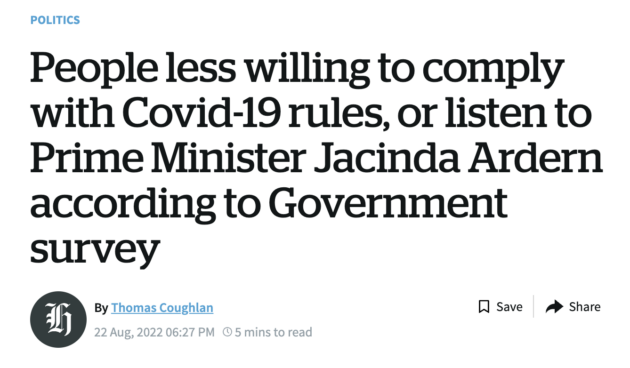 At least every eight weeks, the Department of Prime Minister and Cabinet receives a survey of how New Zealanders feel about Covid-19. It looks at how much people are willing to comply with health rules and whether they trust health messaging on the virus, along with broader health messaging.

The May survey has just been released and shows significant declines in a willingness to comply with Covid rules, although compliance levels were quite high to begin with. Between March and May of this year, the number of people willing to use a face mask when required dropped to 67 per cent, down 11 points.

Just 27 per cent of people will officially record the result of a Covid-19 RAT, including if they get a negative result.

The biggest worry for New Zealanders is no longer Covid-19, but the cost of living, which 77 per cent of respondents said was one of their biggest concerns – Covid came second with 44 per cent.

And there is bad news for the Princess of the Pestilence and her merry band of misery guts:

The survey also asked whose opinion people sought out and listened to on Covid-19.

It found 42 per cent of people sought out then-director general of health Dr Ashley Bloomfield, down 6 points from March. Prime Minister Jacinda Ardern polled just 33 per cent, down 7 points since March and well down on her score from January, when she polled 48 per cent.

Commentators like Dr Siouxsie Wiles and Dr Michael Baker scored 18 per cent and 17 per cent respectively.

Frankly, we are thoroughly sick of the sight of all of them. Bearing in mind that this was May, there have been several more months since then, and I suspect the numbers are simply dreadful now.

But since Ardern refuses to listen to the people, why should the people listen to Ardern?

Where Jacinda Ardern and her beleaguered Labour Party are right now is in the place reserved for odious governments and politicians, where people would rather cross the road than even walk past them.

This is a sure sign for politicians that they are on the way out. A politician with a high emotional quotient will perceive this slide. Arrogant, out-of-touch, narcissists never do and that’s why you see rivers of tears on election night as reality kicks them hard in the proverbial.

Death is stalking this Government, the electoral reaper is going to reap an exceptional harvest when the time comes.
Cam Slater is a New Zealand-based blogger, best known for his role in Dirty Politics and publishing the Whale Oil Beef Hooked blog, which operated from 2005 until it closed in 2019. This article was first published HERE.