Yesterday we broke the story of how Police used a NZ Herald smear article written by an anonymous person to seek further information so that they could ban Avi Yemini from New Zealand. This tactic is known as a “wrap up smear” in political vernacular, and it is precisely what was done to Avi Yemini.

Here is a video from Nancy Pelosi who explains precisely how you conduct a wrap up smear.
The timeline certainly suggests a wrap up smear. Firstly information, both incomplete, and out of context is fed to a tame outlet under the guise of reporting. In this case, it was the NZ Herald that published the article, complete with the out-of-context allegations.

The very next day the NZ Police sent an email from their Interpol liaison officer to Interpol Canberra repeating the smears and asking for more information. 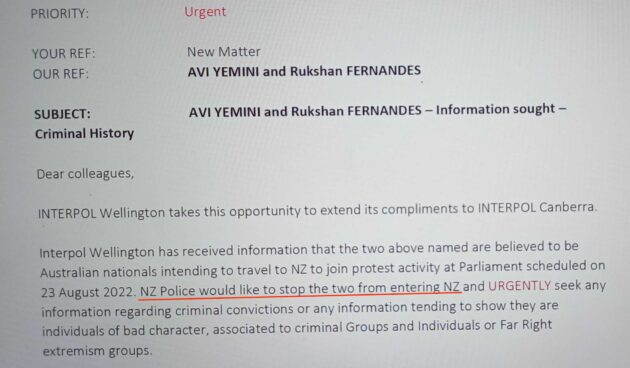 Meanwhile, Immigration NZ says that they based their decision on reports in the NZ Herald, without verifying any of the details.

Then we obtained the leaked communication that revealed that it was NZ Police and not Immigration NZ who wanted Avi Yemini and Rukshan Fernando stopped from coming to New Zealand.

The leaked email shows how Interpol Wellington asked its Canberra counterpart to fish for information which could stop Yemini and fellow reporter Rukshan Fernando from entering the country.

The email alleged that the pair were planning to join the protest “posing as reporters” and were affiliated with bemused local identity Chantelle Baker who laughed off the allegation by saying, “if being mildly interested and commenting on them coming to New Zealand was being associated with them, then I guess I was.”

When I asked Police for clarification via their media liaison, they basically lied by stating that decisions were the responsibility of Immigration NZ and not Police. This was despite a damning email existing that showed that NZ Police were the ones seeking to stop Yemini and Fernando from coming to New Zealand.

The wrap up smear had worked. The smear was placed in the NZ Herald and then used by both Immigration NZ and the NZ Police to prevent Avi Yemini from coming to New Zealand.


And now everyone in the mainstream media is pretending that there is nothing to see here. Proving yet again how complicit they are in working hand in glove with a Labour Government that seeks to silence their political opponents and anyone who speaks the truth.

Why else would we be seeing the demonisation of people for the high crimes of belonging to a group that doesn’t agree with mandates, vaccines or masking?

If anyone is subverting democracy, freedom of association, freedom of speech and freedom of the media it is this Government and their handmaidens in the mainstream media.

Only The Platform has covered this important story. We have total silence from the mainstream media.

Never mind that Police have broken Interpol’s own constitution in seeking the information in the first place.

“It is strictly forbidden for the Organization to undertake any intervention or activities of a political, military, religious or racial character“.

The mainstream media condemn themselves through their own actions and their poodle-like behaviour towards the worst government in New Zealand’s history. 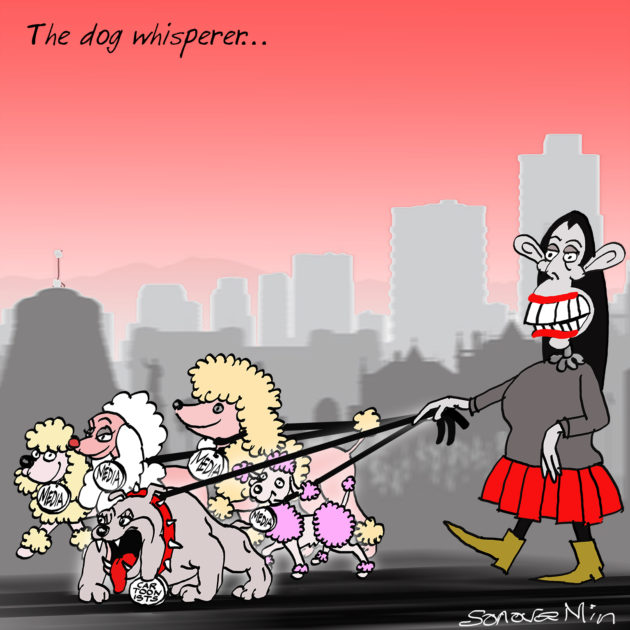 Dog whisperer Cartoon credit: SonovaMin
Cam Slater is a New Zealand-based blogger, best known for his role in Dirty Politics and publishing the Whale Oil Beef Hooked blog, which operated from 2005 until it closed in 2019. This article was first published HERE