Lindsay Mitchell: Most open and transparent govt ever

Most open and transparent government ever. That's what the Prime Minister, who charged herself with bettering outcomes for NZ children, promised.

I monitor the Ministry of Social Development's website daily.

Every five years, New Zealand reports to the United Nations about what they are doing to make sure children’s rights are met.

The government has apparently prepared a response and says:

We would like your feedback on how well the Government has responded to the issues raised by the Committee.

Submissions are welcomed and encouraged from-

forums that operate on behalf of children and young people

iwi and Māori engagement forums, particularly those that work with tamariki and rangatahi Māori

professionals who work with children.

Except the notification appeared today and...

The opening date for submissions and feedback is Tuesday 20 July 2021.

The closing date for submissions and feedback is Tuesday 31 August 2021.

So the notice appears 28 working days after the opening date and 3 working days before the submission closing date.

No I'm not mistaken. MSD even dated the public notification: 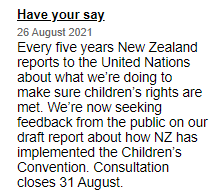 This is a very shonky and incompetent government. Make no mistake.

Ardern will not want a report to the UN reflecting badly on her. The opportunity for criticism is minimised.

But 3 working days in lock down is three days when many people may have time on their hands.

Make a submission. I'm going to.

I may even mention the lack of commitment to 'open and transparent government'.

Advising the public to submit 90% of the way through the submission period is disgraceful. I bet those organisations and "experts" known to give favourable submissions would have been given the nod on day one. They have a track record on this with the Maori Wards submissions.
This shows how paranoid our socialist government has become. Knowing its dire performance across all areas of policy will draw criticism and condemnation from REAL EXPERTS, they choose to close the debate down every time.
As our woke politicians love to say - we are reaching a tipping point, although this usually applies to climate change. I hope that this government is reaching a tipping point of incompetence, secrecy and lies. And when the dam bursts they all get washed away in an apocalyptic flood of alarmist climate change proportions...a fitting way to go!

You have to hand it to the commissar - she really is an expert when it comes to communication. What better way to suppress criticism than deny her critics of time to submit their criticism. She is so expert at telling lies and half-truths with that toothy smile splitting her face. She also has a talent for repeating falsehoods time and again fully aware that, by doing so,she will convince her numpty sycophants and the her flock of sheople that what she says is true.

Fortunately there is a growing body of dissent of sensible Kiwis who are actually, at last, waking up to what she is doing to NEW ZEALAND.

I have not long been a member of this group and have been frustrated by the inability to air views of this disgraceful person dictating the running of our country. I was aware of her dishonesty when she purposely chose to not tell NZ she was pregnant before the elections, in fact I recall immense dislike of her draconian ideology when she was on TV debating with the National member Simon Bridges
on top of that swindling her way into the MP govt with Peters as ally
We all know this however but are we able to get the queen to dissolve the Govt and revote?
This needs to happen asap before she destroys everything we have achieved which is entirely possible before the next elections

@ Robin Tranter.
You write "Peters" with a capital P - despite the fact that he's a charlatan.
Yet you address H.M.Queen Elizabeth ll as - "the queen"!
I wondered who the hell you were talking about - perhaps Ardern?
But she's no queen - with or without a capital Q.
She is the Commissar and a super-hubric one to boot.