Denis Hall: Making up Maori names and words is a growth industry

But Nanny Herald say that Maori is one of the most borrowed languages.

I do believe - that since Maori Language is an issue that consumes the nation - on both sides of the debate - it is time to bring some reality and truth to the table.

When I go to the internet to research this issue - it is impossible not to notice that only one side of the debate can be found - and that one side - the Maori side - is being well represented - especially on Government and Maori oriented websites. So we are going to have to apply our wits - our common sense - and our basic intelligence - to look at this for what it is - starting from the bottom up.

Maori language in its pure form - before Europeans arrived with English and French - was a language that like it or not - was an unwritten language - and the only means of communication between warring tribes of very primitive people on a set of Islands isolated by a vast ocean from the civilisation at large.
To look at this issue - we have to look at where it all began - and we have to describe the Lives of the Maori people as it was back then - before we changed it to what it is now.
The first problem in this discussion is - as soon as we use the term “primitive” - or “Stone Age” - both of which are applicable and appropriate - we get accused of racism - and that instantly stifles debate. But - stone and wood tools and weapons - means both primitive and Stone Age. There is no alternative to that truth - and the stark evidence can be seen in our museums.

Further to that reality - when accusations of racism are used to silence debate - we can safely assume there are aspects of this issue that certain people do not want examined or debated - and that social dynamic will be what has emerged out of politics and ideology - when in fact discussing the realities and the history of things - ideology and politics have no place.

Reality is reality - politics and Ideology by definition - are a construct.

So we - debating language - have to begin with what kind of language would emerge out of an ancient and isolated society - that had no metal of any kind - so no blades to be used for work or weapons - and no fabric - because no cotton or sheep from which to make clothing and blankets - and no pottery or ceramics to store or carry food or water - no written language of any kind so no way to record or remember things except orally.

When a person is killed or dies - all their knowledge dies with them.

They lived in small huts (there are photographs of them,) about four metres by three metres - made of reeds and raupo and flax and branches and sticks - and often these were erected behind stockades - not to protect them from wild animals - because there were none - but for protection from attacks by other tribes.

Simple stuff - to know and understand.

We have to remember - there was a reason why we called them Maori Warriors - and that was because they fought tribal wars against their only enemies. Other Maori. That rugby team is not called the Warriors for nothing. The term Maori Warrior - is entirely traditional - and that is what the facial tattoos and the Haka is all about.

Life back then was no walk in the park.

In researching this - I asked Google how many words the Maori Language had in pre European times - and it is now impossible to get a straight answer. Try it and see. But many years ago when I was at school - in the forties - I was told that there were 700 words in the original Maori language as it was on the arrival of the first Europeans.

If we go back to google and forget ethnicity - and just talk about uneducated people in the modern age (like today)- they (uneducated people - according to research) will have a functional vocabulary as low as 2000 words - and that is in a very complex modern society - the most complex in human history - that has words written everywhere - and there to be heard on radio and TV and in the street. So using that as a guide - it seems to me that those early estimates of the number of “pre European” Maori words in the late 1700s - at 700 - sounds probable - because after all - there was no TV or radio to learn from.

By contrast - the vocabulary of early Maori would be determined by the people around them - and in earshot.

Tell me I’m wrong. But you will need a convincing argument - and remember - we are talking averages.

Here’s the quote cut and pasted from the Maori Language website: “Most Māori dictionaries contain between 10,000 and 20,000 word entries. If every Māori word that ever appeared in print was counted the number may reach 100,000. As with any major English dictionary, many words would not be known by fluent speakers.”

Let me pull that apart for you. “Most” Maori dictionaries they say - “most” - meaning like - MOST - contains between 10,000 and 20,000 word “ENTRIES”. Why such a disparity - and if 20,00 words are available - why do they even bother citing the 'dictionaries' that only have 10,000 words - because they must be worse than useless. Then - “If every maori word that ever appeared in print was counted - (and how do we ever find them to do that) there could be as many as 100,000: And then to suggest - that these Maori dictionaries only contain as few as 10,000 words when there are as many as ten times that number ‘possibly’ available and some of those would not be known to fluent Maori speakers - smacks of obfuscation of the known truth to me.

I have to say - that this is the way these websites are put together - not to supply accurate information - but to suggest a parity with English - and given that most Maori words are derived from English - I think the people behind this travesty of subverting truth - need to front up and explain.

Cut and pasted off Google: Merriam-Webster online dictionary informs its readers that their latest official edition includes approximately 470,000 entries. Main page of Oxford English Dictionary official website states that they cover over 600,000 terms. At the same time, latest published edition of Oxford Advanced Learner's Dictionary offers its readers information about over 60,000 words. In its turn, Cambridge Advanced Learner’s Dictionary has approximately 140,000 entries. Collins English Dictionary covers a whopping number of words – 750,000. Additionally, if we consult Wikipedia, we find out that their English Wiktionary includes about 520,000 words.

And then there is this also cut and pasted off google: According to lexicographer and dictionary expert Susie Dent, “the average active vocabulary of an adult English speaker is around 20,000 words, while his passive vocabulary is around 40,000 words.”

Here’s a quote from one of these New Zealand Government sponsored websites - with my notes in brackets and Italics:

From 1769 (when James Cook arrived) Maori began to interact with the new visitors to their lands. (They did that by killing some of Tasman’s men and Cook’s men and eating them - and by killing and eating French Sea Captain and explorer duFresne and 25 of his men - but this history fails to mention that aspect of their “interaction.) (It goes on to say) - At first, it was European men under the guise of exploration, (See how they style the language to make the amazing voyages of global exploration undertaken by people like Tasman and Cook and du Fresne seem fundamentally dishonest by suggesting it was under the “guise” of some ulterior motive. This is a classic example of the rewritten modern New Zealand History for you.)(These were the people who paved the way for the civilisation and democracy that Maori live in and enjoy today.) (They go on to end that sentence with) then whalers and sealers from Europe and North America, and later missionaries. They brought with them different languages (English and French - and they were deathly afraid of the French)continues:>) technologies and ideas, all of which Maori adopted when it suited them to do so.

"When it suited them to do so!"

I could respond to that last snide comment by saying - particularly blankets to keep them warm - and hundreds of muskets to kill the tribe down the road that they didn’t like.

They also go on to say that Hongi Hika - who used wealth gained in England to purchase a thousand muskets and set about killing all other tribes he could find - but this website styles him as a language educator helping to compile the first Maori dictionary.

Be warned people - this is just a sample of what they are doing to rewrite New Zealand history and language - to make the people who actually built the nation - look as bad as possible.

All this is about as dishonest as it can get.

What is going on in New Zealand - is actually a crime against the civilisation.

And when we research all this - we find that they are boasting about how many words we - the English - 'borrow' from them - and how rich their words make our language - and they fail to mention what their language would be like without all the transliterated English words they use to make their language work in the modern age.

The ignorance and arrogance is complete. Talk about deluded.

This was meant to be longer - but I'm too tired tonight.

The photo is from the Herald story about 'borrowed' words. 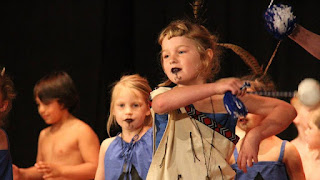 Denis Hall describes himself as an old man and an artist - a thinker - a writer - and a commentator. He does what he does - for the love of it

After heaping such misinformation through indoctrination on our vulnerable school children wouldn't be a great idea to push for the general voting age be brought down to 16 years of age? G

I appreciate your rationality and scholarship Denis - agree with every word. Popular culture is lamentable. The only saving grace is that there are still honest brokers around who keep on telling it like it is - and was - Paul Moon's This Horrid Practice is out of print but still available in some libraries - for now- and in e-book.
The woke have such a stupid idea of 'respect'. It is respectful to make every effort to know how things really are, and were. A woman, I sometimes fear that it has been since women have had a greater voice that things have had to be 'nicer'. I certainly blame the masculine element for most of the horror in the world but - hmmm- long think-yeah.

My primary school-aged children were told at the weekly kapa haka class they are obliged to attend :”Maori is the most important language in ‘Aotearoa’ [sic].”

That’s why around 90% of the English words in current usage are transliterations from the Maori, right?

When everyone peddling the brown supremacist hobby language speaks and understands English, one or thr other is clearly redundant.

My money’s on the hobby language…

There are people who only speak Maori (or Samoan)- from the pacific islands. They would just use English words when needed as far as I can see!

Read Beneath the Southern Cross by Graeme Sturgeon. If you really want an incite into our historical truth.