Lindsay Mitchell: Carte blanche to keep having kids on a benefit

An evidence brief prepared for Oranga Tamariki and published in April 2021 contains some fascinating data.

The first group is those who had interaction with both care and protection (CP) and youth justice (YJ). You can figure the rest from there.

The next shows the association with benefits at age 17:

Looking at just the first group 19% had already received their own benefit; in the past year 23% had a parent who'd received Jobseeker; 20% a parent on sole parent support and 8% with a parent receiving suported living payment.

That totals to 70 percent. (This might be an overcount because it's feasible one parent received both types of benefit in the same year but the paper doesn't spell out any overlap).

For those 17 year-olds who had never been involved with care and protection or youth justice the equivalent number was just 13 percent.

The link between long-term benefit dependence and appearing in the care and protection or youth justice systems is very strong.

On Thursday last week the government effectively sent a message that it's fine to be on a benefit and keep having kids. They passed a law to undo prior attempts to discourage this, known as the 'subsequent child policy'. Put simply, a rule to stop people avoiding work obligations by having more babies.

Why has the government done this?

The subsequent child policy has a disproportionate effect on Māori women. By removing the policy, we can further our commitment to improving outcomes for Māori and valuing the role of carers, who are predominantly women.

Maori make up 56% of the people adding children to a benefit.

So I leave you with one last graph from the brief: 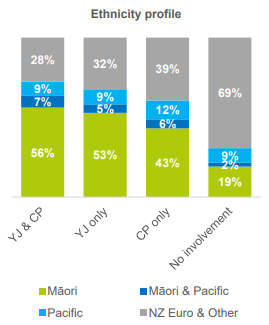 The last Labour government swept having babies on a benefit under the carpet. That was bad enough.

Now it's overt and encouraged.

"The subsequent child policy has a disproportionate effect on Māori women. By removing the policy, we can further our commitment to improving outcomes for Māori and valuing the role of carers, who are predominantly women."

The statement above shows how far this government is removed from reality. What it says is that we want women on benefits, who can't support themselves and are heavily reliant on state handouts, to have more babies who will then be paid for by everyone else. As will the cost of putting a fair proportion of them through the Youth Justice and Care & Protection programme because their parent(s) can't look after properly even though they're being paid to by the state.

Being cynical, I reckon this is all about getting the Maori population up so that they can demand more, regardless of the cost to the country, and the quality of the new citizens.
How to send your country well and truly down the crapper. Or as Lindsay puts it more politely - madness!!

What happens when there is no more money left in the pot?.

Now the Socialist Labour Cult is encouraging single women to become stud mares and pay them to do bugger all but rear the next generation of beneficiaries without having to identify the sire who then gets a free pass. Who is going to pay the taxes to support them because with the introduction of He Puapua all the honest hard-working taxpayers both brown and white will have migrated to a country with grown up people running it?
This country should be the best place in the world, but it is being screwed up by a bunch of socialist numpties who are hell-bent on appeasing a minority of tribal elite, culture vultures, cancel culture wokesters and climate change alarmist greenies.
I fear for my children (all in employment), grandchildren and for those who are in no position to escape the inevitable shit storm when it hits the fan.

The subsequent child policy has a disproportionate effect on Māori women. By removing the policy, we can further our commitment to improving outcomes for Māori and valuing the role of carers, who are predominantly women.
Maori make up 56% of the people adding children to a benefit."
That Minister must read:
"A Conversation With My Country" straight after reading "Maori. The Crisis and the Challenge."Both by Allan Duff.
She can then pass them on to those of her collegues that can read.

Maori need the unemployed, the prison statistics, the children in poverty. Take away the reason for more money to be thrown at maori and the whole structure will collapse. Too many maori are making really good money out of the current situation.