Lindsay Mitchell: MSD - "What's happening to the number of sole parents on a benefit?"

Until the welfare reforms of 2013 most sole parents on a benefit relied on the DPB - not exclusively but mainly.

Since the introduction of the Sole Parent Support (SPS) benefit, which sole parents only qualify for until their youngest child turns 14, it's been harder to track how many sole parents are actually reliant on welfare. Far more are now receiving Jobseeker support.

Usefully MSD released some research in September, "What's happening to the number of sole parents on a benefit?" Numbers have been increasing - in part due to the economic effect of lock downs  - and they wanted to predict whether the growth trend will continue. More on that later.

First some facts. At January 2021 there were "around 99,000 sole parents receiving a main benefit". Yet at December 31, 2020 there were just 67,563 on SPS. That highlights the significant difference I was talking about. Almost fifty percent more than receive SPS are relying on other benefits.

Of the current total 46 percent are Maori, 28 percent NZ European and 12 percent Pacific Island. 'Other/ unspecified' make up the remainder.

On the upside 99,000 is still fewer than  in the early 2000s. The chart below covers 1996 to the present. The decline since the GFC is due to the falling teen birth rate and increased employment rates of sole parents. 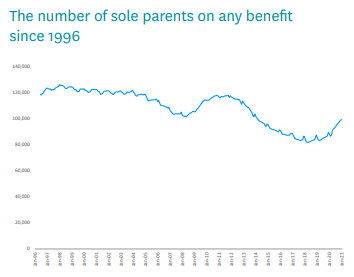 If  the trend reversal could be pinpointed it looks like the beginning of 2018 - well before covid.

As to whether the trend will continue, the authors expect the growth to be "temporary."

I am less certain.

Since Labour took over there has been a clear shift in approach to sole parents. Financial penalties for not naming the father of a child were abolished and early work obligations for mothers who add a child to an existing benefit have been removed. Benefit payment rates increased as did family tax credits, including the Best Start payment for 0-2 year-olds.

The paper itself gives clues to an attitudinal change. For instance,"A strong work focus may not be appropriate for all parents in the long-term..."

There is also a cultural tolerance, bordering on apologism, for the high rate of Maori dependence with,"Wahine Māori have higher and earlier fertility rates than other women, meaning they are more likely to require support from the benefit system as a parent."

Further to this, the following statement appears to endorse sole parenthood for Maori: "...research suggests for tamariki Māori, diverse family trajectories, including living in a sole parent household, may be associated with higher levels of cultural connectedness in some cases."

So in light of the above, including racial indulgence, I will not be surprised if the numbers of sole parents on a benefit actually continues to grow.